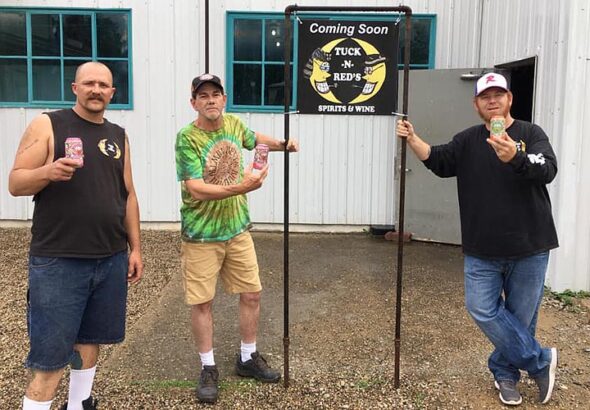 From left: Tucker Thompson, John Mick and Charlie Harrell of Tuck-N-Reds Spirits & Wine pose in front of the business sign outside their new space at Millworks, while enjoying a few beers from their neighbors, YS Brewery. (Submitted Photo)

At its June 9 virtual meeting, the YS Planning Commission unanimously voted to approve a conditional use permit for a new distillery to be located at Millworks. The distillery, Tuck-N-Reds Spirits & Wine, will be located in currently vacant space next to Yellow Springs Brewery; it will also use the site of the former S&G Distillery as its office space.

The new business is the venture of Tucker Thompson (“Tuck”), Charles Harrell (“Red”) and John Mick. The owners plan for the space to include a tasting room, a tour area for patrons and distillery space on view behind a glass wall. They will also sell bottles of spirituous liquor and merchandise onsite.

Although both the distillery and the company’s office space are permitted uses in the I-1 zoning district, “retail incidental to manufacturing of goods,” is a conditional use, according to a memo from Village Planning Zoning Administrator Denise Swinger.

Registered with the State of Ohio as Tucknreds, LLC, the owners are currently working with Greene County Building Regulations as they remodel the space. State and federal licenses are in the works for the use of a commercial still, which was built for Tuck-N-Reds by the North Georgia Still Company. The owners hope to open by the end of September.

The business will sell spirits like multi-grain whiskey and sweet potato vodka, “shine” (as in corn liquor moonshine) and their signature “mountain wine.” Commission Chair Frank Doden asked for clarification on the definition of “mountain wine.” Harrell responded that Tuck-N-Reds mountain wines come in a variety of fruit and flower flavors.

“There may also be some sediment in there and a higher [alcohol by volume],” Harrell told the commission.

Expanding on the definition of “mountain wine” by phone to the News this week, Harrell said, “We’ve got a slogan that we’re branding: ‘This s—t ain’t made from grapes.’”

Harrell said the recipe for the Tuck-N-Reds dandelion wine was handed down from his great-great-grandmother. He learned the distilling craft from his own grandfather as a teenager. Harrell clarified that Tuck-N-Reds will be his first venture as a licensed distiller.

“Distillation of spirits [at home] is against the law in the state of Ohio, let’s be honest,” he said. “But moonshining is a heritage, it goes back generations — it’s even been romanticized on the Discovery channel. It was handed down to me.”

All told, Tuck-N-Reds will offer 17 different beverages, including barrel-aged whiskey and rum; shines in flavors like peach cobbler and apple pie, as well as unflavored clear corn liquor — “What everybody considers to be traditional moonshine,” Harrell said — and mountain wines with fruit flavors like watermelon and green apple. When dandelions are out of season, Tuck-N-Reds will replace its dandelion wine with rose petal wine.

Harrell is from and lives in DeGraff, Ohio, just northwest of West Liberty. Thompson lives in Springfield and Mick lives in Lena, east of Piqua.

The trio of owners had previously planned to purchase another property north of De Graff near Indian Lake, but the owners of that property backed out of the sale, leaving Tuck-N-Reds in “a precarious spot,” Harrell said. They became aware of the space at Millworks through Mick who, according to Harrell, spends several days a week in the village and noticed the Millworks vacancy.

“It just kind of fell in our laps,” Harrell said. “It’s just a good fit for what we’re trying to do — the building is a good fit, the culture is a good fit.”

Harrell said that the village’s embrace of artisan products from the YS Brewery led the owners to believe Yellow Springs would be a good place to grow their business.

“We’re coming from the woods and trying to go mainstream — I think this place will be more accepting of that than others,” he said.

Millworks owner Jessica Yamamoto said she has tried some of the Tuck-N-Reds line of products, and she thinks they’ll be a good complement to the variety of beverages offered next door at the YS Brewery.

“They have a wonderful product, and I think it will really speak well to millennials, who are a driving force in our economy,” she said. “I look forward to seeing them become part of Millworks.”

Before approving the application, Planning Commission members spoke to concerns that the new business might create an increased need for parking at Millworks. Commission member Stephen Green pointed out that the previous distiller y located at Millworks, S&G Distillery, was much smaller and had only allowed for a “handful” of visitors, and thus didn’t contribute heavily to the number of cars in the Millworks lot; Tuck-N-Reds will have space in its facility for 42 patrons and six employees.

Zoning Administrator Swinger responded that those who find the parking lot full will most likely park in the municipal lot at the Bryan Center and walk to Millworks on the bike path, as has been the case for visitors to the YS Brewery.

“I’m not that concerned,” Swinger said.

At the meeting, Millworks owner Yamamoto confirmed that the upcoming business will be accessible from the bike path, but that patrons would have to circumnavigate the business park to access it.

Tuck-N-Reds co-owner Harrell told the commission that he hopes there are areas at Millworks that might be improved and designated as parking.

“But I don’t think there are a lot of long-term visitors, so I think the flow of traffic will be similar to what it is now,” he said.

Commission member Dean Pallotta asked how the business would handle social distancing measures, should they be necessary in September. Harrell answered that he had been observing the measures that the YS Brewery has put in place, including a maximum number of guests per party, ushering full parties to socially distanced tables and ordering at tables rather than at the bar.

“We’ll probably follow right along with what they’re doing,” he said.

The owners of Tuck-N-Reds plan for the business to be open to the public from noon to 8 p.m., Tuesdays through Saturdays, with Sundays and Mondays being reserved for distillery production.

In other June 9 Planning Commission business:

• The commission approved an application from Marie Hertzler and Brian Maughan for a subdivision of their property in order to create a small lot with an uncommon frontage on Cliff Street; they intend to build a small house on the rear of their property and sell the current house. Approval was given on the condition that the property owners provide a plan to properly mitigate stormwater drainage and runoff when the property is surveyed.

• A conditional use application from Julie Williams to establish a clinical psychology practice in her Marshall Street home was approved. Williams intends to see clients both virtually and in person in her home.

• The commission noted the resolution of a parking issue that had been discussed at its Feb. 11 meeting, when the commission voted to approve a conditional use for Home, Inc.’s planned Glen Cottages pocket neighborhood. The commission’s approval required Home, Inc. to revise some of its plan for parking. The original plan would have included a fire lane on Woodrow Street, reducing the number of street parking spaces for residents.

Village staff met with representatives of Home, Inc. and Miami Township Fire Chief Colin Altman to find a solution; the plan was amended to move the planned buildings back by eight feet to allow room for a fire lane in the pocket neighborhood’s driveway.

Swinger commented that she’d received a phone call from a Woodrow Street resident who had thanked the commission for the amended plan, calling it “a win-win.”