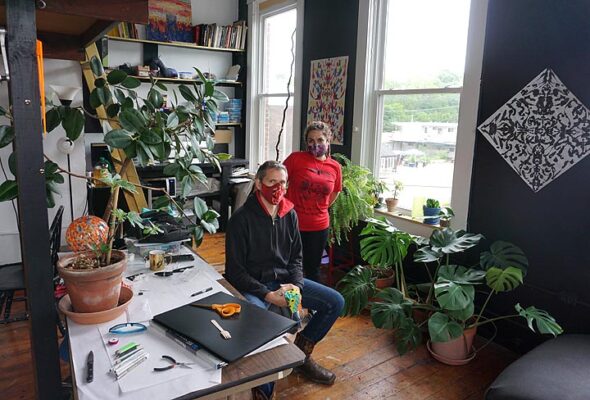 YS INK Arts Collective, co-owned by longtime Yellow Springs residents Pierre Nagley and Lindsay Burke, recently opened its doors on Dayton Street as a new hub for local artistry. For the moment, YS INK primarily functions as a tattoo parlor, with both Nagley and Burke working from their years of experience as tattoo artists. The two are excited, however, to one day transform their new collective into a kind of creative gathering space for art makers and art lovers alike. (Photo by Reilly Dixon)

When you walk upstairs at 128½ Dayton St. and arrive at the second floor landing, you find yourself entering into a handsome art studio. The vaulted ceilings and tall windows flood the large room with natural light. The overgrown houseplants tastefully scattered throughout the room seem to enjoy it up there. Large paintings deck the walls and innumerable art supplies of all kinds are everywhere you turn. A palpable creative energy vibrates throughout the room. If it wasn’t for the soft bass emanating from the floorboards, you’d almost forget you were standing above The Gulch Saloon during happy hour.

This newly renovated art studio is now the homebase for the YS INK Arts Collective, a Yellow Springs-based arts organization and tattoo parlor.

Spearheaded by longtime villagers Pierre Nagley and Linsday Burke, YS INK is on track to breathe new life into the Yellow Springs art scene. At the present moment, Nagley and Burke are accepting new tattoo clients. While they may still be in the honeymoon phase of having opened a new business, they have their eyes set on the future. They’re both looking forward to a time when they can safely turn their studio into more than just a tattoo parlor — they want it to become a local mecca and gathering place for artists and art-lovers alike to share in their love for all things creative.

Both Burke and Nagley have extensive and colorful backgrounds as artists. Between the two of them, they have over 10 years of tattoo experience working out of various shops around the Dayton area. Outside of tattooing, though, both artists dabble in a wide array of media. Nagley’s larger-than-life murals adorn the back walls of a handful of downtown businesses. If you’re lucky, while on a nature hike, you may happen to come across one of his natural sculptures out in the wild. Burke, on the other hand, is a prolific illustrator. Her work — often embellished with political overtones and gender-empowered imagery — has been sold at shows and festivals all over the area. Their powers combined, Burke and Nagley are a creative force to be reckoned with.

“It’s been quite a journey getting to this point,” Burke said of the progress she and Nagley have made in setting up YS INK’s space since they first signed the lease eight months ago.

“We still have a long way to go,” she said. “Now’s a tough time to start a business.”

“But we are so ready for the pay-off,” added Nagley.

The story of establishing the collective and settling into their studio is a turbulent one. Before Burke and Nagley moved into their studio, the space had been rented out as a residential apartment, but because of how it was zoned by the Village, Burke and Nagley saw the “diamond in the rough.” They envisioned not just their future tattoo parlor, but a potential hub for local artists of all stripes. So, they signed on the dotted line and set to work.

As it turns out, making a fully operational tattoo parlor out of nothing is no small task.

“We’ve had to redo everything,” Burke said. “We’ve redone the floors, refinished nearly all the surfaces, put in fresh countertops, installed new lights and set up a new plumbing system. We patched holes in the walls and ceilings and painted the entirety of the place. It was truly every single thing, big and small — all the way down to door handles.”

And just when they had gotten almost everything squared away, with the space up to code and their renovations approved by the health department, COVID-19 hit. Yellow Springs, like much of the world, went on lockdown and Burke and Nagley’s plans to open shop were stalled.

According to Nagley, the lockdown made a bad financial situation even worse. They had already sunk thousands of dollars into renovations, they weren’t being given any leniency with their rent and, on top of it all, the collective still wasn’t pulling in any revenue.

One day, a stroke of creative genius came over Nagley. YS INK would make masks.

“For a little over two months, this place was a mask-making factory,” he said.

Nagley said he was inspired by an NPR report he heard sometime mid-March, just shortly before fears of COVID came to town.

“I started thinking about how most traditional or medical masks aren’t appealing, and I thought that some people might not want to wear them because they seem too sterile and unattractive,” Nagley said. “So, I wanted to incorporate cool and colorful designs that worked to destigmatize and stylize what was and is a public health necessity.”

People showed an interest right away. Nagley and Burke were shipping orders of dozens of masks not only to friends and people in the area, but all over the country — to businesses, nursing homes, restaurants, and more.

And so, with his background in sewing and needlework, Nagley was able to sell several hundred masks in just under two months. Suffice it to say, money was finally coming in. YS INK could stay afloat a little longer.

With Gov. DeWine having given the green light to all Ohio tattoo shops to open on May 15, and with preliminary fears over the pandemic receding somewhat, Burke and Nagley have set their sights back to tattooing — they’re now open for business, albeit with some caution.

“We’re following suit with other tattoo shops,” said Burke. “We’re appointments only — no walk-ins. We do consultations by text, Zoom, e-mail or by phone call. When you come the day of your actual appointment, you’re asked to come alone and with a mask. A lot of people like to bring friends when they get tattooed, but we’re not doing that right now. We ask that you stay in your car until the time of your appointment and until we’ve properly set up the station. We’re also not trying to book ourselves solid.”

She also said that they’re only doing one tattoo a day, which in the tattoo business, isn’t a lot.

“By doing only one per day, I have the rest of the day to focus on cleaning up and re-sterilizing my tools and my space,” said Burke.

She explained that this new approach means that ultimately, people may have to wait longer for their tattoo. The whole process, from clients first communicating their ideas to Burke or Nagley, all the way to seeing the designs come to life on their skin, is far more drawn out compared to pre-COVID times.

“We’re going to do it the right way,” said Burke. “Our primary goal is keeping people safe.”

But in spite of these new safety protocols and their tireless efforts to keep their shop as sanitary as possible, Burke and Nagley maintain some trepidation for what the coming year has in store for YS INK.

“At the end of the day, we just have to play it by ear to see how [the pandemic] plays out. It’s hard to say what would happen if a second wave were to hit,” said Nagley. “It’s just such an insecure time for people in our line of work because how intimately close we have to be with customers.”

They’re trying to stay optimistic, though. Burke and Nagley are eager for a fully post-COVID world in which they get back to doing what they love the most: sharing in the creative process with their community. While they are keen to sustain the collective through tattooing for the time being, both co-owners have big ambitions to broaden the scope of the collective in the distant future.

They have dreams of one day turning their walls into a rotating gallery space for local artists to showcase their work. They hope to host live painting events and art workshops; to sell handmade goods and crafts from local artisans; to be a headquarters for artists of all media who might be working on projects throughout the village.

But above all else, “we want to offer people a public space where they can just hang out and talk about ideas,” said Nagley. “That’s who we are as artists: just people who like to talk through ideas, and when you’re an idea person, it’s good to have a place to go where you can work through those concepts with others. There aren’t enough of those kinds of spaces in town, so here we are, offering one.”

Likewise, Burke is also looking forward to a time when she can revel in the communal practices of both art making and art sharing. According to her, that’s precisely why she got into the business of tattooing in the first place. She sees tattooing as a way of sharing and connecting deeply with others — as a mode of storytelling.

“There is a special connection you make with people when you’re tattooing them,” said Burke. “It’s a bonding experience. I’ve tattooed people for losses, births, transformations and to mark major life lessons. And I’m more than ready to get back to doing what I love the most.”

To learn more about YS INK Arts Collective and Burke and Nagley’s plans for further developing the collective, to inquire about artistic collaborations or to schedule a tattoo appointment with either artist, send them an email at ysinkart@gmail.com or call them at 937-838-3692.