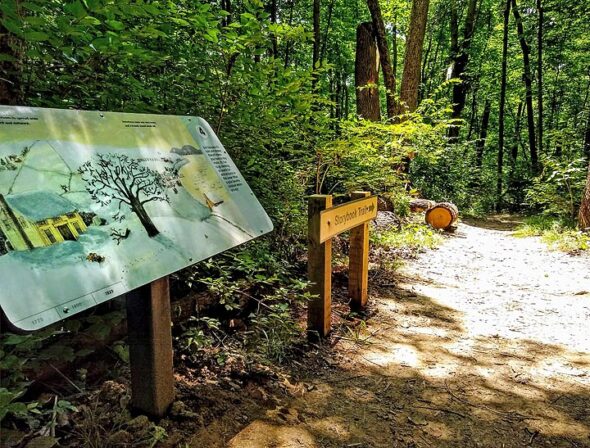 One of the stops along the Storybook Trail, a new half-mile hiking loop at John Bryan State Park. As young hikers follow the trail, they can read the book "As An Oak Tree Grows," which has been split into panels and placed along the trail's route. (Photo by Lauren Shows)

As Ohio settles into summer, four of its state parks are offering ways to combine nature and story with the recent unveiling of four new Storybook Trails. One of those trails is right at home for Yellow Springs residents, having opened at John Bryan State Park a few weeks ago.

A combined effort of the Ohio Department of Natural Resources, or ODNR, the Dolly Parton Imagination Library and the Ohio Imagination Library, the John Bryan Storybook Trail leads hikers of all ages through the woods on a new half-mile loop trail. As hikers walk, they will encounter an unfolding story on large panels along the path. Trails have also been established at Dillon, Maumee Bay and Wingfoot Lake state parks.

According to ODNR Director of Special Projects Alyssa Yaple, who spoke to the News by phone last week, the first Storybook Trail was established last year at Alum Creek State Park in Delaware, Ohio, as a trial run. After its successful implementation, ODNR looked for parks spread across different regions of the state to expand the program. Yaple said John Bryan was selected to receive its own trail not only because of its location, but because of the amenities already in place there.

“When we evaluated the parks, we looked for places where parking and restrooms were nearby, and we tried our best to put them near playgrounds so they’ll be in places where families already are,” she said.

The Storybook Trail at John Bryan is located adjacent to the park’s playground, as well as a parking lot and restrooms.

“We really wanted to spread the trails around to places that don’t have as many family amenities as some of the larger parks,” she said.

Each of the four new Storybook Trails features a different book relating to nature; the books were chosen by Ohio First Lady Fran DeWine. Each book is broken up, page by page, on panels installed at a child-appropriate height. Yaple said that each trail is distinct from the others and the selected books were paired with the trail that most closely matched the theme of the book. For example, the book chosen for Maumee Bay was “Where the Butterflies Go,” and the trail runs through a meadow, where butterflies often visit the wildflowers.

“It worked out really well — the books [DeWine] selected seem to fit perfectly within each park,” Yaple said.

The book featured in John Bryan’s new trail is “As an Oak Tree Grows,” by New England author G. Brian Karas. The story follows the life of an oak — from acorn to sapling to sprawling tree — over the course of more than 200 years. The book’s text and illustrations detail, in light touches, the changes in the world around the oak tree — from its planting by an Indigenous boy, to the coming of white settlers and deforestation, to the growth of industry and suburban sprawl. Each story panel includes questions for young readers to ponder as they follow the trail, which is situated among a wealth of trees — mostly maples, but oaks can be spotted elsewhere in the park.

The new trail was cleared by hand and winds down and back up at a somewhat sharp incline at the end; very young hikers may need to be helped by adults. The hike includes a small, scenic overlook into the greater untouched forest, and shares its route with a section of the park’s North Rim Trail about halfway through the half-mile loop. 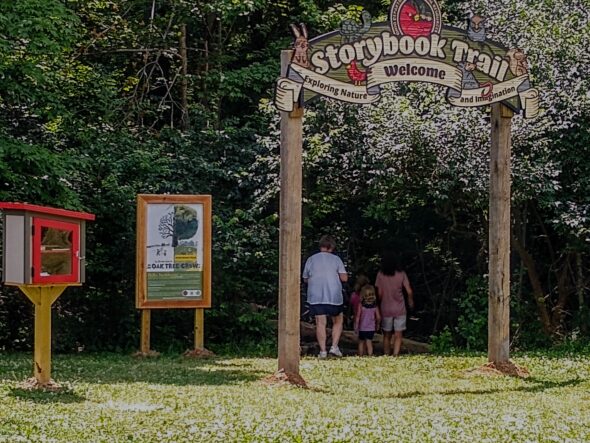 The entrance to the Storybook Trail, which is located next to the playground at John Bryan State Park. The entrance to the trail also features a Little Free Library for kids, where young readers can borrow and donate books. (Photo by Lauren Shows)

The entrance of each Storybook Trail is marked by a large archway, and each archway is flanked by a new Little Free Library, where park-goers can borrow and donate books. According to a press release from ODNR, books for the opening of each trail were provided by the nonprofit organization School Rocks Party Box and Ali Michaels, a 10-year-old student from Chapman Elementary School in Dublin, Ohio.

The panels installed along the trails were embedded in cement and were constructed so that the stories displayed there can be periodically changed and hikers can experience new stories. Yaple said that ODNR anticipates that the frames themselves will last “at least a few years” before they need to be replaced and that the current ODNR administration intends to continue maintaining the trails for the foreseeable future.

“As long as the current administration is there, the trails will definitely be a priority,” she said.

For more information on Ohio State Parks, visit ohiodnr.gov/wps/portal/gov/odnr-core/home and click on “Our Divisions” and “Ohio State Parks & Watercraft.” This website is temporary and only includes basic information; the site is slated to be updated in late summer.