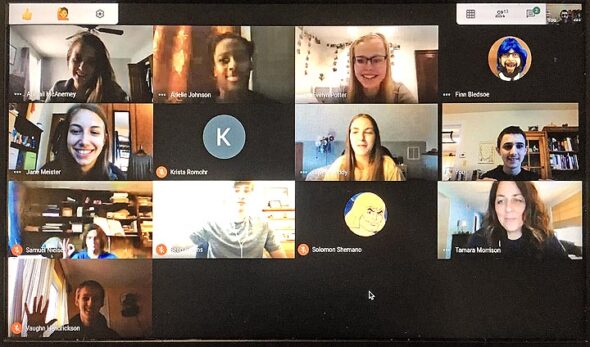 This is the third article about the reopening of local schools. The first looked at the district’s plan as of early July, the second explored families’ feelings about returning to school and this week shares the teachers’ perspective.

As Yellow Springs school district leaders consider what educational approach to take when the 2020–21 academic year begins Aug. 27, the local teachers union says the risks of returning to the classroom amid the continuing COVID-19 pandemic are too great, and is calling for “100% virtual” learning when school resumes.

The Yellow Springs Education Association, or YSEA, the union that represents local teachers, issued a letter Tuesday, July 14, outlining teachers’ stance on reopening schools at this time. And the union that represents other district staff, the Yellow Springs chapter of the Ohio Association of Public School Employees, has since expressed its agreement as well.

“The variables and risks that present themselves in our current climate indicate that it is not the time to return to in-person education experiences with our students,” the teachers’ letter states. (The full text of the letter is posted on the YS News website.)

Asked about the district’s response to the letter, Superintendent Terri Holden said she doesn’t “do business in public,” but added, “I just want people to understand that I take the health and safety of teachers and staff very seriously, and that will certainly be part of the decision-making process.”

In a joint phone interview this week, YSEA Co-Presidents Sarah Amin and Kate Lohmeyer said teachers’ concerns grew while the district initially prepared for a full-time, in-person return to classes, as announced July 1 by Superintendent Holden and supported by the governor and the Ohio Department of Education. Local teachers began expressing their safety fears in both group planning meetings and individual phone calls to union leadership, Lohmeyer said.

“Our tipping point was when our members started calling us individually,” Lohmeyer, who teachers health and physical education at the middle and high school, said. “We heard the fear. … It was starting to get emotional.”

The union leaders organized a pair of online conference meetings for its membership — 51 local educators — to discuss teachers’ personal viewpoints.

After having previously focused their attention on educational questions and safety protocols, “we really began to think about returning from the human perspective,” Lohmeyer said.

She noted that a number of Yellow Springs teachers, especially the veteran educators, are among those with the highest risk for contracting the disease in terms of both age and underlying health issues. The most vulnerable would not be able to return to the classroom at all, and accommodations would need to be made for their ongoing engagement in the learning day, she continued. The number of teachers this would affect is not yet known, according to the district.

But even those who ostensibly could return were feeling that their health — as well as the health of students and the wider community — was at risk in doing so.

With the number of cases rising, and the start date growing closer, “we just didn’t feel we could get everything done to be in compliance and be safe,” Lohmeyer said.

Amin, who teaches sixth grade at Mills Lawn, agreed. “We are rushing in this really fast. There are so many variables and unknowns.”

The rising national and regional case numbers were also of concern to administrators, leading Superintendent Holden to send a new letter to families on Monday, July 13, explaining that the full-time return option was being scrapped for a hybrid approach that would combine two days of in-person instruction with online learning. In the letter, and during a subsequent virtual town hall meeting Monday, July 20, Holden explained that the district is now weighing two basic plans. Under the first plan, families would choose between the hybrid approach (two days of in-person education and three days online) or an all-online option provided by a contracted third-party service. The second would have all students being taught online by Yellow Springs teachers.

Families have been asked to respond to the letter and indicate their preferred option by 5 p.m. Friday, July 24. Holden said during Monday’s town hall meeting that she hoped to make a decision before the end of the weekend.

The teachers sent their collective statement to Holden and the school board the day after the district notified families of its consideration of a hybrid instructional model as a possible option for students.

Why teachers are speaking up

Amin said they felt like it was time for teachers’ views to be shared more widely — in part because all communication with the community had thus far been from the administration and because community members have been asking in person and on social media about what teachers and staff think.

“I think Yellow Springs schools and all schools should be 100% online as per the CDC guidelines, which state that the lowest risk is to have online learning only,” he wrote in an email response to the News. “Any other plan that includes students and staff interacting in school will sadly result in students and staff getting sick and dying. Political pressure to reopen is what is driving this insanity nationwide. Our COVID numbers are worse than when we closed in March. Why on earth would we open now?”

The union co-presidents said the YSEA statement was made in an informational and collaborative, rather than adversarial, spirit.

Local teachers also keenly felt the absence of teachers’ voices across the country, and had accepted the challenge of stepping out as leaders and models, Lohmeyer and Amin said.

Amin said that the pandemic has become so politicized that it’s difficult to get clear guidance from national, state and health leaders.

“The conversation is not honest,” she said.

Both said that such organizations as the Ohio Department of Education, local health departments and even the national and state teachers union have issued a variety of guidelines and protocols. But “nobody wants to take a stance,” Amin said.

“Nobody wants to take responsibility for the action and choice and what could happen,” Lohmeyer agreed.

Greene County Public Health, or GCPH, on Wednesday, July 15, released a seven-page document offering “Guidance for Reopening Yellow Springs Schools.” It repeats much of the guidelines put out by the state earlier in the month. It also “suggests” mask wearing by students in third grade or older and sets out protocols for assessing student and staff health as well as responses when a student or employee becomes ill.

The document’s preface states that the GCPH “has created these general principles that each school district can consider as our community proceeds with the reopening of our schools.”

Among the general principles are the directive that “each school district should establish, prioritize, and implement safety protocols” and each district should work closely with the GCPH to “promote safety.”

Under “symptom assessment,” the document states, “it is essential that [all coming into the school] conduct daily health checks prior to going to school,” including taking temperatures and assessing symptoms.

The GCPH also “strongly recommends that approved sanitizers and cleaners be used” in the schools, and lists protocols for cleaning and sanitizing drinking fountains, with the recommendation that staff and students be “encouraged” to bring their own water.

Food service is allowed in all schools, but self-service buffets and/or salad bars, as well as common utensils and shared condiments are prohibited.

In addition, the GCPH recommends restricting such activities as school choirs, field trips and overnight travel, assemblies and dances, and suggests that library materials be removed from circulation for 72 hours after the item has been returned.

Amin and Lohmeyer wish health agencies would be more definitive and call for keeping schools closed.

They said they won’t feel comfortable returning to the classroom until “there is more robust testing and [case] numbers decline.”

The teachers said that whether they return to the classroom, even part-time, or go with an all-online plan, all options will include challenges and the need for planning and implementing new ways of presenting instruction.

An advantage to adopting an online plan is that it would “remove the health and safety piece weighing us down,” Lohmeyer said.

They said they recognize that spring term was not up to community standards, as reported in a News story last week.

“Last spring we were operating in crisis mode,” Amin said, adding that teachers have spent the nearly two months since the end of the 2019–20 academic year reflecting on the experience and beginning to envision better methods.

“We’re all willing to do the work,” she said.

Lorrie Sparrow-Knapp, who teaches performance arts at the middle and high school, said in a phone interview this week that if an online model is adopted, she envisions being able to give more individual attention to students and help them go deeper in personal practice.

“Just because it’s different doesn’t mean there isn’t value or it doesn’t have rigor,” she said of online learning. If online, “this is the year we really hone our craft. We do in-depth text analysis and character development.”

Sparrow-Knapp affirmed that Amin and Lohmeyer “speak for me; speak for all of us.”

She said she is proud of the union’s stance and is optimistic about the coming year.

High school history teacher John Day has more concerns, but still believes that being online is best at this moment in time.

“I wish there was a great way to go back to school during this pandemic, but as the superintendent said at the beginning of the town hall meeting, every option has big drawbacks,” he wrote in an email in response to the News. “I’m pretty sure what every teacher loves the most about teaching is the in-person interaction with students, and I believe that is normally the most effective way to teach, as well.”

And he worries about families trying to navigate adult work life and children’s online education.

“With all that being said,” he added, “COVID cases are rising rapidly nationally and locally and the prevalence of the disease makes it too risky to put the lives of students, their families, and teachers at risk. A school, even at half-capacity with required precautions, seems like a petri dish with hundreds of young people enclosed in a limited space.”

He wrote that he also worries that “if we start with a hybrid schedule and suddenly have to switch to fully online, things will be even more confusing.”

In the end, “I think it’s going to come down to Yellow Springs Schools making the most of the ‘least-bad’ option, knowing that we will get through this tough time eventually, and, I believe, will even learn some things that will help schools do a better job going forward.”

Lohmeyer and Amin also spoke about their hopes for strenghtening local schools.

“We are excited about the potential for growth,” Lohmeyer said. “We understand that [online learning is] going to create [its own] problems, but as a community, how can we solve those problems? We have the opportunity to change some things, some inequalities, that were in existence in public education. This is an opportunity to change the conversation about public education. The future is bright. We’re optimistic.”