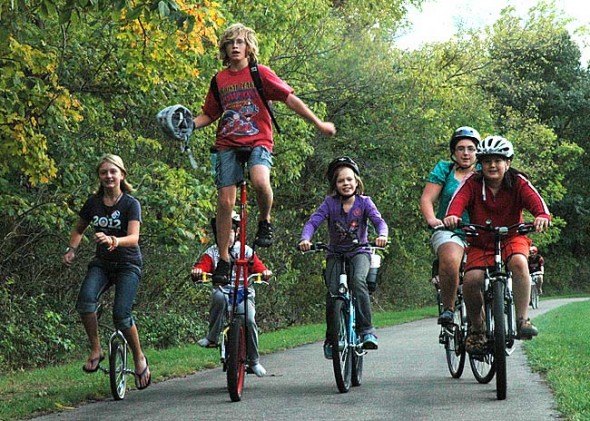 As the new academic year approaches, the Antioch School — the local independent day-school for pre-K and elementary school-aged children — is planning to open its doors, and its many windows, for in-person classes this fall.

While Yellow Springs and many other public school districts in the area are responding to concerns about the ongoing COVID-19 pandemic by adopting an online model to start the 2020–21 school year, the 99-year-old private Antioch School is preparing to welcome students back to its Corry Street campus Sept. 2. The school’s small enrollment of 50-some students helps make the opening possible, according to School Manager Nathan Summers.

But the set-up won’t be quite the same as it was before the governor temporarily closed all Ohio schools in March, Summers said recently, noting that a variety of COVID-related safety protocols are being put in place.

For one thing, the school, which already had a strong year-round outdoor component, will be “maximizing our outdoor time,” Summers said. Classes will take place outside as much as possible; and while the weather holds, the windows that line the classrooms will be opened, with recently purchased fans circulating the air. New UV-C light air-sterilization units also have been purchased for each room, and installation is anticipated in September, Summers said.

According to a letter sent to families early last month, the in-person return was informed by state guidelines, the recommendations of the American Academy of Pediatrics and epidemiologists, and the results of a family survey distributed in late May.

Gov. Mike DeWine has continued to express his desire that Ohio students return to in-person classes for the 2020–21 school year, but is giving school communities — public and private — control over developing individual restart plans, in line with safety protocols outlined by Ohio Department of Education and local health department guidelines. The governor’s decision-making is bolstered by the American Academy of Pediatrics, or AAP, which has maintained a clear preference for students’ return to the classroom.

“The AAP strongly advocates that all policy considerations for the coming school year should start with a goal of having students physically present in school,” the organization states on its website.

Concerns cited by the group include not only the educational welfare, but also the emotional, mental and physical health of children amid extended interruptions of normal school services.

Antioch School families, for their part, have also shown a clear preference for returning to in-person classes, Summers said.

Of the 38 responses to the May survey, representing nearly all of the school’s families, 27, or 71% of respondents, answered positively to a query about returning to school “entirely face-to-face.” And conversely, 29, or 76.3% responded negatively to beginning the year “entirely remote/digital.”

Summers said that in restarting the new year, all classes likely will be smaller. The nursery classroom, for example, will go from a maximum of 12 students to nine, a change that also eliminates the necessity of having two full-time adults in the room. A recent staff departure means that no employee will lose their job, but the number of volunteers who assist in the classrooms in a variety of ways will be limited, he said. In addition to the school manager, staff will include five full-time teachers, a full-time floating aide and two part-time aides, according to Summers.

Spending more time outdoors will be an easy transition for teachers, Summers said, noting that the school already has outdoor classrooms that are used all year. The kindergarten class has spent one day a week fully outdoors for several years, while other classes venture outside regularly.

“Outdoor learning has been an intricate part of the school since its inception,” Summer wrote in a letter to parents. “Outdoor learning isn’t an add-on to the curriculum because of COVID-19, it is one of the core principles of the Antioch School.”

Each classroom also has direct access to the outside, and students will be required to enter through their room’s external door when they come and go.

Masks will be required of all adults and encouraged for all children, especially in the building. Students also will be encouraged to wash their hands regularly.

Students will need to bring their own lunch and snack foods, and lunches will be eaten outside whenever possible. They will also need to bring a personal water bottle, as the water fountain will be turned off.

The school also plans “regular and frequent cleaning of shared surfaces and items during and after school,” and limited use of communally shared supplies.

According to the school, physical distancing will be maintained with marks on the floor for group gatherings, fewer chairs around tables and less furniture in the rooms. Inter-group meetings will be held outside as much as possible.

While the letter to families stressed the safety precautions being put in place, it also noted that the school’s return plan was contingent on community health and state regulations.

Further spread of the virus could delay the reopening or change the school day structure, Summers said.

One Response to “Antioch School plans for in-person restart”