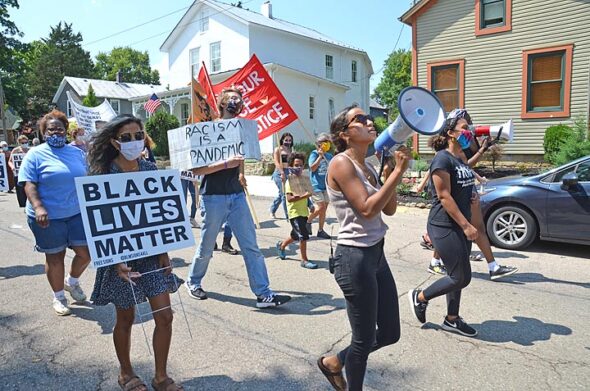 During a recent march, demonstrators traveled to the Bryan Center to deliver a handful of letters to the Village related to a recent dispute between Village and demonstrators. Those tensions eased this week after apologies from some Council members and renewed commitments to anti-racism. (Photo by Megan Bachman)

At their Aug. 17 virtual meeting, Village Council members agreed to move forward to meet the demands of local anti-racist rally organizers and take other steps to address racism locally after tensions escalated between the two groups in recent weeks.

The Village’s renewed commitments to anti-racist action came as two Council members apologized for a letter they wrote to demonstrators earlier this month following the second of two conflict resolution sessions between the groups.

Village officials and demonstrators have been at odds over the summer about several issues, including the demonstrators’ lack of a permit to march and YS Police Chief Brian Carlson’s handling of a call to a purported member of the KKK who threatened to counterprotest in the village.

The dispute came to a head in recent weeks when a letter from Council members Marianne MacQueen and Kevin Stokes asking demonstrators to apologize to Carlson and acknowledge prior Village efforts to address racism was met with a swift rebuke by organizers, who said they found the letter demeaning and condescending.

“Please accept my sincere apology for inadvertently making you feel put upon and asking you to do something that you felt would have been humiliating to you,” Stokes said at the Council meeting, reading from a pre-written letter.

“I should not have co-written and sent that letter and my pride does not prevent me from admitting that,” he added.

MacQueen said in her letter that she was “saddened” by the results of the communications and the meetings she organized between the groups, which she said had the “opposite effect” of aligning the sides.

“I know that everyone involved holds a passion for social justice and is aware of how the negative impact of racism has stained our country,” she said. “I apologize for how things came down. I’m sorry for the pain this has caused. I hope to better learn how to reach across group differences more effectively.” (Both letters are printed on page 5.)

And in a prepared statement read in his absence by Council President Brian Housh, Chief Carlson wrote that recent conversations with local Black Lives Matter activists have given him a “greater understanding” of his actions related to the national crisis of racism.

“I recognize that this demands more deeply informed actions on my part,” he added. “I look forward to continued dialogue with village activists.”

Organizers at the meeting said they were looking forward to collaborating with the Village.

Bomani Moyenda, who worked with the group of primarily young Black women to organize the rallies and marches, said he was encouraged by the recent progress after the two groups went through “a rough spot.”

“I’m glad to see people making the effort to get over the top, past and through the wave of discord,” he said. “I’m looking forward to some positive things happening in the future.”

Angela Allen, one of the demonstrators, said previous concerns around protesters feeling “silenced” by Village officials are no longer an issue after the recent letters from Stokes and MacQueen.

“Moving forward, I think we’re just going to be focused on the demands,” Allen said. “We appreciate all of the work that has gone into them so far.”

Housh said that the recent contentions that have arisen have prompted Village officials to reflect more deeply on the issues at hand.

“Now more than ever we’ve got to think differently and really respond to the public health crisis that is racism,” he said.

MacQueen also went through each demand from organizers and gave an update on the status of the Village, or another local entity’s, response. She said the Village, for instance, is making progress on preparing local policing data, creating a policy for YSPD dispatch to handle calls that may have a racial motivation and analyzing the way the Village dealt with a potential threat from the Klan, which may become the basis of an internal training exercise.

Earlier in the meeting, Council formed a new group to move forward Council proposals to address racism and organizer demands: the Justice System Collaborative Committee. The group would also “vet recommendations” from citizens. More on that group, and other items from Council’s Aug. 17 agenda, will be in an upcoming issue of the News.

One Response to “Council recommits to anti-racism”