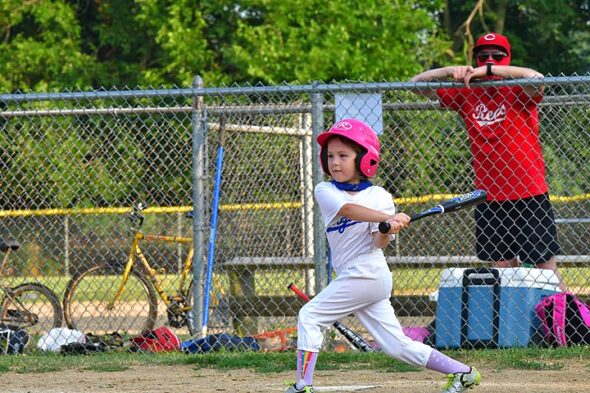 The Trail Tavern Dodgers won the minor league playoffs on Wednesday, July 22, with a victory over the top seeded Posterior Chain Reds. Dodgers player Nora Carr batted for the team during a game earlier this month. (Photo by Kathleen Galarza)

In the Yellow Springs Youth Baseball Minor League, on Wednesday, July 22, the Trail Tavern Dodgers completed their playoff run with an 8–6 victory over the top seed, the Posterior Chain Reds. In the first inning, the Dodgers jumped out to an early lead that they did not relinquish. Madeline Murray started the scoring with a single to drive in Henry Carr, and Ezra Lydy added a two-run homer. After a scoreless second inning, the Dodgers extended the lead to 8–0 in the third, on singles by Alex Main, Sophia Purdin and Edwin Harrah. However, the Reds came back with five runs in their half of the third inning, with home runs by Everett Reeves and Henry Lake. The Reds added another run in the fourth and had the tying run on second, but Lucas Mikesell made an unassisted putout to seal the game and the tournament championship for the Dodgers.

On Monday, July 20, in the Major League, the Tom’s Market Reds defeated the Adoption Link Dodgers, 22–10. The Reds scored nine runs in the first inning and totaled 18 hits for the victory. Sam Linden was four-for-four with a home run and six RBIs, while Sam Miller and Cal Freeman each had a home run and four RBIs. Caleb Derrickson led all pitchers with 2.1 innings and five strikeouts. Violet Babb was two-for-three with two RBIs and Jake Ortiz-Thornton pitched 1.2 shutout innings with four strikeouts for the Dodgers.