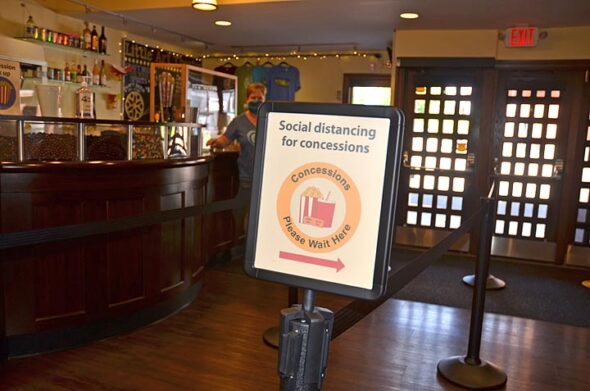 The 90-year-old local independent theater, the Little Art, reopened two weekends ago after being closed for more than four months. Among the new safety precautions to prevent the spread of COVID-19 are, as seen here, socially distanced concession lines. Patrons also must wear masks, and every other row in the theater is closed off to ensure adequate social distance. (Photo by Megan Bachman)

When the Little Art Theatre closed its doors on March 13 in response to fears about the coronavirus, the independent theatre was set to screen the newly released film “Emma.”

Based on a Jane Austen novel, the movie was just the type of film that Little Art Executive Director Jenny Cowperthwaite Ruka has seen open to large crowds here.

Last weekend, as the first feature to be shown since the theater’s reopening, “Emma” drew 62 patrons over its four-day run. Before the pandemic, the theater would have sold that many tickets for opening night alone.

“It’s a huge change,” Cowperthwaite Ruka reflected on opening weekend in an interview this week.

With capacity in the theater reduced by at least 60% due to new social distancing requirements, the Little Art can’t handle any more than 52 patrons for a screening, down from a previous capacity of 122 (although reaching 52 would be highly unlikely). And over the first weekend, a dozen or fewer moviegoers attended each screening.

But those who did come out were thrilled to see movies again on the big screen after the Little Art went dark more than four months ago.

“Everybody that came was really happy to be back,” Cowperthwaite Ruka said.

Cowperthwaite Ruka said those who attended fit the bill for their “regular patrons,” which means they were 50 or older. Although they felt comfortable coming back to the theater, she knows that some people aren’t.

Whether moviegoers return in droves or a trickle, the newly refashioned theater experience is a safe one, Cowperthwaite Ruka believes.

“We took [the safety precautions] to the nth degree,” she said. “We want to be as safe as we can be.”

For instance, staff will regularly wipe down and disinfect surfaces, including every seat between movie screenings. But most of the changes involve audience behavior.

Moviegoers must now wear a mask at all times when they are moving around the theater and when seated, unless they are actively eating or drinking. They have to get to the theater at least five minutes before the movie starts, and are encouraged to call or go online even earlier to make a reservation. Attendees will pick their seat when they purchase a ticket, and when they enter the theater will be taken to their seat by an usher.

“It’s like a cattle drive when you come in,” Cowperthwaite Ruka  said. “You can’t stand around and say hi to each other anymore.”

After finding their seat, audience members can get up and purchase concessions by following markings on the floor indicating where they should stand.

As for seats, every other row in the theater is closed off so that patrons are assured a physical distance of at least six feet from others. Capacity will vary for each show, since a single moviegoer will get an entire row to themselves, while a group of up to four people who come together are allowed to sit in the same row. That means that the capacity for a show could be as low as 17, if only individuals came to a screening. While possible, such a scenario is unlikely, Cowperthwaite Ruka noted. (Reaching the upper end of capacity, 52, would also be unlikely as it would mean all groups.)

The Little Art is one of the few movie theaters that have reopened in the area. After indoor theaters were closed by the governor on March 16, they were allowed to reopen on June 10 with enhanced safety precautions. But many area theaters have moved to reopen more slowly. The Neon, an independent cinema in downtown Dayton, opened earlier this month, while chain theaters with local locations such as AMC, Cinemark and Regal, continually pushed back their reopening dates over the last month.

Cowperthwaite Ruka said the Little Art decided to reopen because the 90-year-old theater has a “mission and a purpose” to fulfill for the community. Meanwhile, the decision to attend a film is up to audiences.

“I like to think that everyone who comes here is educated enough to be making the right choice for themselves,” she said.

There’s also a risk to staying closed, according to Cowperthwaite Ruka. For the Little Art, a long-term closure could mean “the death of the theater,” she said.

“It’s not good for a business to stay closed,” she said. “There’s risk to opening it and there’s risk to staying closed. We feel really good about the extreme measures we’ve taken to keep customers safe.”

But if low attendance rates hold, she conceded, the Little Art’s financial model would not be sustainable. Even before the pandemic, the nonprofit theater needed to rely on memberships, additional donations and business sponsorships to keep its doors open. Thankfully, over the last several months, members have continued to pay their dues, Cowperthwaite Ruka said. But the future is uncertain.

“We’re hoping we can ride it out, but we’ll have to wait and see,” Cowperthwaite Ruka said.

Other challenges face movie theaters these days. In pushing back reopening dates, large chain theaters have cited decisions by film companies to delay the release of their films. Two major summer blockbusters, Warner Bros.’ “Tenet” and the Disney live-action remake, “Mulan,” have been pushed back to August, while some films set to open this year are now scheduled for release in 2021. Other film companies have opted to release their films straight to streaming services, as was the case with DreamWorks’ “Trolls World Tour” in the spring.

“The reason for this is that these are very expensive productions with huge advertising budgets that need to get maximum return in theaters, not just in the U.S. but globally, to recover their costs,” Cowperthwaite Ruka wrote of such industry decisions in an email.

Even if the Little Art doesn’t play such films, it has a ripple effect, Cowperthwaite Ruka explained. As a result, she estimates that only about one-quarter of all movie theaters have reopened nationally, both as a result of virus concerns as well as the “lack of product” from Hollywood.

“Hollywood is still pushing back films even more, which is like a domino effect in the whole industry,” she said. “Nobody wants to open until they feel that there’s a worthwhile reason to. It’s a very precarious and tenuous business of which we are just at the tail end.”

Another complication recently arose. With a documentary about Gordon Lightfoot scheduled to open soon, Cowperthwaite Ruka could not access any promotional materials, including a poster or trailer for the film.

“People are cutting back, and they’re not putting money where they don’t need to put money,” she suggested.

In the meantime, the Little Art will keep the films rolling as it continues to bolster its safety precautions. In the offing may be air filters that employ UV light to kill virus particles and organic fogging systems to more quickly disinfect the theater between screenings.

For now, the Little Art is only open from Friday through Monday. And they aren’t taking reservations for special events, which would be more complicated to accommodate and increase risk to staff, according to Cowperthwaite Ruka.

As a testament to their safe reopening plan, nearly all of the Little Art’s employees have decided to return. Now, they are hoping that audiences do, too. That doesn’t mean that another closure or a change in operations can’t happen.

“We’re going to re-evaluate this as it goes along. That means not just the numbers at the Little Art, but the COVID numbers, too,” Cowperthwaite Ruka said.

The Little Art will show “Portrait of a Lady on Fire,” this weekend, another film previously scheduled for March, at a reduced rate of $5. The first new release to screen will be “Gordon Lightfoot: If You Could Read My Mind,” followed by “The Burnt Orange Heresy.”

One Response to “Movies return to Little Art big screen”