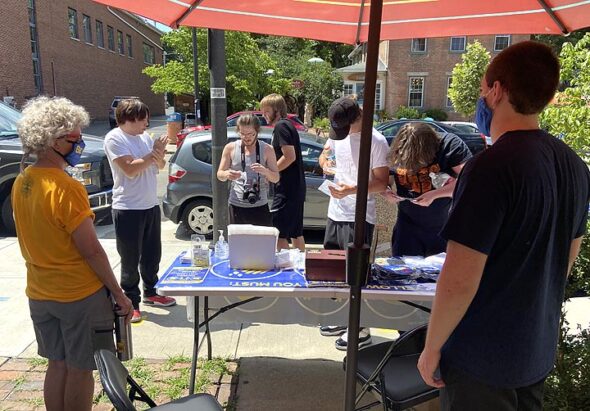 Village Mayor Pam Conine, left, and local volunteer Harper Mesure handed out masks to passersby downtown on a recent weekend as part of the Village’s “mask ambassador” initiative, aimed at encouraging mask-wearing downtown. According to Council President Brian Housh, who spearheaded the initiative, the Springfield youth in the above photo initially balked at the message on a mask flier, but were seen wearing the free masks they picked up at the booth the rest of the day. The Village has handed out 900 free masks over the last four weekends. (Submitted photo by Brian Housh)

State mask order: how to enforce?

Exactly two weeks to the day after the Village of Yellow Springs mandated face masks in downtown Yellow Springs to slow the spread of COVID-19, Ohio Gov. Mike DeWine announced masks would be required in public across the whole state.

But how will the new statewide mask mandate be enforced, and by whom? And how does the state’s new mask order impact the enforcement of the Yellow Springs mask law, and broader local efforts to encourage residents and visitors to wear masks here?

At a Village town hall a few hours after DeWine announced the new order, Village officials praised the move.

“Today he has delivered for us,” Village Manager Josué Salmerón said of DeWine’s decision.

Calling it “an additional tool to do mask enforcement,” Salmerón noted that the state health order applies to the entirety of the village, and not just downtown.

“I see it as a welcome addition to our tool box to encourage mask-wearing in our village,” Salmerón added.

DeWine’s order, which went into effect on Thursday, July 23, specifies that all Ohioans must wear facial coverings when indoors at a location that is not that person’s residence, as well as outdoors when someone is unable to maintain a six-foot social distance from those outside their household. Masks are also required when waiting for, or using, public transportation.

But some are exempt from the new mandate, including those 10 and younger, those with a medical condition or disability or communicating with someone with a disability, those actively exercising or playing sports, an officiant at a religious service, those involved in public safety or those actively eating or drinking.

DeWine’s statewide mask mandate follows on the heels of an earlier order that required those living in counties at the state’s alert level 3 — signifying “very high exposure and spread” of COVID-19 — to wear a mask in public. As of last week, 60% of the state’s population was already required to wear masks under that previous order.

“We are at a point now where people will accept this. It’s the right thing to do,” DeWine said of the new health order at a press briefing last week. “We’ve been at 60%, now is the time to go to 100%.”

Although Greene County is currently under alert level 2, DeWine said living in a county at level 1 or 2 is “even more reason to wear a mask” in order to avoid reaching higher alert levels signifying an increased risk of catching the virus.

During an emergency meeting on July 8, Yellow Springs Village Council passed its own mask mandate, but only for the central business district. The local ordinance is similar to the statewide order, in that masks are needed indoors and outside when social distancing is not possible, and it makes similar exemptions to those who are under 10, actively exercising or eating, or have a medical condition that prevents them from wearing a mask.

There are differences, too. If a person is found in violation of the Yellow Springs ordinance, the first infraction comes with a warning, followed by a $30 and then a $50 fine. In lieu of penalties, community service may instead be assigned, local officials have said. Both local police and municipal officials may enforce the measure.

Exactly how the new state health order will be enforced is less clear.

The state order itself does not specify any penalties for not wearing a mask. Violating a state public health order, though, is a second-degree criminal misdemeanor, which is punishable by a $750 fine and up to 90 days in jail.

In response to a question from the News, Ohio Department of Health spokesperson Melanie Amato wrote in an email on Monday that the order can be enforced by either local law enforcement or local health departments.

However, over the last week, numerous health departments across the state, along with several municipal police departments and county sheriff’s departments, have explicitly stated that they would not — or could not — enforce the mask order.

In public Facebook posts last week, police departments in Xenia and Fairborn stated they would not respond to, or investigate, complaints about those not wearing masks, and instructed residents to not call them or 911 with mask complaints. Instead, both directed residents to Greene County Public Health.

But Greene County Public Health spokesperson Laurie Fox wrote in an email this week that the county health department “lacked the legal authority to issue a ticket or citation if someone lacked a facial covering.”

“We have no legal authority over the general population,” Fox wrote.

Jeffery Webb, the Greene County Public Health’s Director of Environmental Health, stated in an email that the health department was focused on public education and working with businesses to ensure they are complying with state mandates related to masks. He added that they would work with law enforcement “when requested.”

“For now, we are focusing on educating the public on all aspects of the COVID-19 safety precautions,” he wrote.

Fox added that it is the health department’s job to “educate the businesses and the public about the importance of mask use and the mandate in place, and encourage businesses to enforce mask use with their employees and customers.”

“This is why we have a complaint system set up to capture these concerns so our compliance team can investigate and speak with the business or agency in question,” Fox explained.

The health department has received “various complaints” about businesses not complying with COVID-19 requirements, including mask complaints, according to Webb. However, he noted the health department has not issued any written warnings related to mask usage at businesses. (Employees are required to wear masks in most businesses, in most cases.) Fox added that if a “continual violation” occurs at a business, the Greene County Prosecutor’s Office may get involved to take further action.

In response to a News public records request, the county health department released reports indicating that it has issued cease-and-desist orders to seven businesses in the county for violating state health orders related to COVID-19, which may include mask-related infractions. They include PetSmart locations in Beavercreek and Dayton, Kohl’s locations in Beavercreek and Dayton, GroomingDales Pet Salon & Day Spa in Beavercreek, Your CBD Oil in Centerville and GameStop in Dayton.

Yellow Springs police will, in fact, respond to mask-related complaints about violations of the state order, YSPD Chief Brian Carlson confirmed this week. However, local police will only cite people under the state order “if needed” and would start by using the local ordinance, which carries a less serious civil, rather than criminal, penalty.

No citations for not wearing a mask have been given so far in the village related to either the local or state order, according to Chief Carlson this week. Carlson reported that since July 8, local police have received five calls from individuals reporting those not wearing masks in violation of the order. Two calls were related to a maskless downtown busker, who later cited a medical condition as the reason for not wearing a mask. Three of the calls were in connection with a group of individuals on the sidewalk in front of the Spirited Goat Coffeehouse not wearing masks. All situations were mediated by local police and verbal warnings were given, Carlson confirmed.

The Village of Yellow Springs’ efforts to encourage masks in town started well before the state, or even the local, ordinance, and they include other strategies beyond civil or criminal consequences.

It was April 3 when the U.S. Centers for Disease Control and Prevention officially recommended that all people wear cloth face masks or other face coverings when going into public to protect others from the respiratory droplets they expel while talking. Soon after, the Yellow Springs Chamber of Commerce developed a campaign with the message “Mask On YS” and printed and posted signs around town. Later, they added the “Be Kind” signs with an image of a mask with a heart on it. Also, in early  April, the Village, which had recently erected electronic billboard signs at several entrances to the village, added the message to the rotation: “Mask On in Yellow Springs.”

On April 27, when announcing new guidelines for businesses to reopen, Ohio Gov. Mike DeWine initially made masks mandatory in stores for both customers and employees. But the next day, he reversed course on the customer requirement, saying that the measure “went too far.”

Over the next several weeks Council explored whether or not it was possible for the Village to require masks, while Village officials also expressed worries about enforcing such a measure. Council then passed a resolution calling for mask-wearing downtown at its June 15 meeting, but the resolution was only a “formal statement” that contained no enforcement provision. The Village followed that action by adding more signage downtown stating masks must be worn and supplemented them with images stenciled on downtown sidewalks. After increased public pressure for a more robust measure with enforcement provisions, Council on July 8 passed an ordinance mandating masks downtown.

For Council President Brian Housh, the goal of Village efforts over the last four months has not been just to get “something on the books that looks good, but is not enforced,” but to actually “get results” with increased mask-wearing in town.

“From the beginning, my head has been focused on how we get the behavior that we want,” Housh said this week.

For the last four weekends, those efforts have included a “mask ambassador” program spearheaded by Housh. For upwards of seven hours on every Saturday and Sunday in July, volunteers and Village officials have staffed a booth downtown to promote mask-wearing and give away free masks to passersby. According to Housh, 28 volunteers have so far given away 900 masks. Funds for the effort came from the Yellow Springs Community Foundation and, as an additional benefit, half of the masks were purchased from local shops, Housh said.

Housh said that mask ambassadors were not “enforcers” of mask-wearing, but instead either thanked pedestrians for donning masks or offered those without a mask a free one. He said the proactive approach has been effective, and that the Village’s efforts have drawn some visitors to town in order to shop in a more safe setting.

“The conversations have been positive,” Housh said. “Often, someone has a paper mask and wants to upgrade it, or their mask broke, or they forgot their mask.”

“We are offering people masks, but we are not trying to have engagements about rights,” Housh added.

During his time at the booth, Housh said there were only two occasions in which the individual openly challenged mask requirements. Housh has also witnessed the number of people wearing masks downtown increase significantly over the month, especially among local youth. He now estimates only 1 in 100 people is not wearing a mask. This weekend is set to be the last one for the program.

“I almost never see someone not wearing a mask,” Housh said.

2 Responses to “State mask order: how to enforce?”