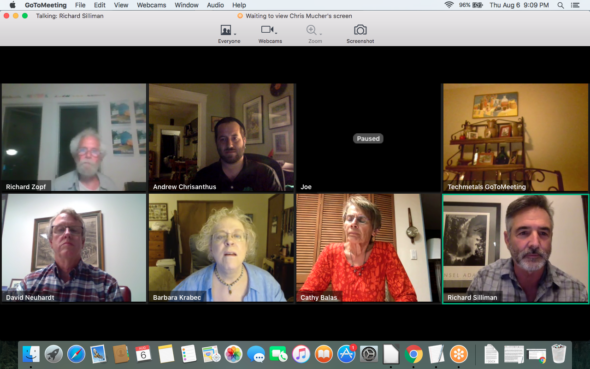 The Miami Township Board of Zoning Appeals conducted a public hearing online Thursday night, Aug. 6, concerning a temporary variance request to allow comedian Dave Chappelle to continue presenting shows at a property zoned for agricultural use.

The Miami Township Board of Zoning Appeals gave the green light Thursday night, Aug. 6, to comedian Dave Chappelle and his team to continue presenting shows at a rural property off Meredith Road.

The ticketed events, which began in June and have continued two to four nights a week, fall outside the agricultural zoning designation of the property owned by Steve and Stacey Wirrig, according to Zoning Inspector Richard Zopf. The shows, which often feature a slate of nationally known performers, are presented at a pavilion built by the Wirrigs in 2017.

Informed early last month that the activity was in violation of the township zoning code, Steve Wirrig applied for a temporary variance from the zoning appeals board. The board’s decision Thursday night concluded an online public hearing conducted on the GotoMeeting platform.

Nearly 190 people logged or called into the meeting, with about 40 giving testimony for close to two hours before the five-member board went into executive session for deliberation.

Most participants spoke in favor of granting the variance request in which the event organizers committed to limiting the performance schedule to no more than four a week ending Oct. 4, and capping attendance at 400 patrons per show.

While access to the pavilion is off Meredith Road, the property’s address is 4866 U.S. 68, adjacent to the Young’s Christmas tree farm. A number of neighbors from both roadways offered testimony, with the predominant issues cited being noise, lighting and traffic.

Most of the neighbors, however, expressed full support of the events, which they said provided not only an economic boon for the area, but also enjoyment and hope amid difficult times. Even those who have been disturbed by noise that sometimes “rattles the house,” or worry about their children’s safety with the increased traffic, said they see benefit in the events and don’t want to shut them down; they just want their concerns to be addressed.

Also entered into the record were 460 emails and 40 statements made to Zopf prior to the hearing. He said that while the large majority were in favor of granting the variance, some of the concerns expressed included not only noise, lighting and traffic, but also litter and profanity. He noted that another complaint was that neighbors had not been consulted before the shows began.

In addition to highlighting their joy in attending a performance, many commentators also praised the COVID-19 related safety measures taken at the shows, noting that patrons are required to have their temperature taken and fill out a health questionnaire before entering the performance area, where masks are mandated and seating is set up to maintain social distancing.

In granting the variance, the appeals board set two conditions: the first stated that the applicant make an effort to reduce the noise level of the events, and the second called for the owner to meet once a week with neighbors to hear their concerns.

A longer story about the hearing will be published in next week’s print edition of the News.