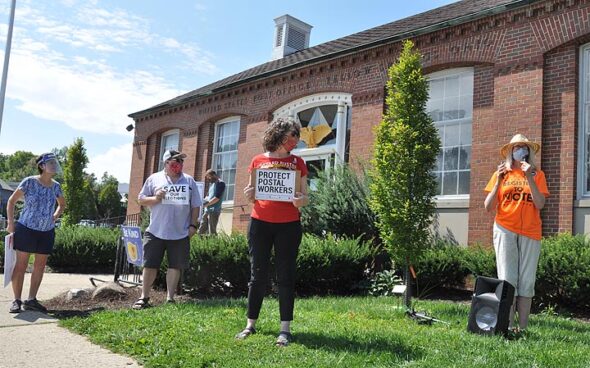 At least 30 people rallied outside the Yellow Springs post office on Saturday, Aug. 22, in support of the U.S. postal service and its vital role in delivering election mail. More than double the usual number of voters in Ohio are expected to opt for mail-in voting this year amid the ongoing COVID-19 pandemic, and some fear recent postal changes could compromise that process. The local rally was organized by Susan Alberter, right, and Melissa Rodriguez (not pictured). (Photo by Audrey Hackett)

At least 30 people rallied outside the Yellow Springs post office last Saturday, Aug. 22, as part of a nationwide protest of postal changes that could affect mail-in voting this fall. Such voting is surging in popularity amid the ongoing COVID-19 pandemic.

Rodriguez pointed to reported delivery slowdowns in the Dayton area that could be related to widespread postal cutbacks made by DeJoy, a major Trump donor. Alberter voiced concern that Trump has claimed repeatedly, without evidence, that mail-in voting leads to fraud.

“Trump is trying to undermine our faith in the post office,” Alberter said in her remarks at the rally.

Among the postal changes made by DeJoy are the decommissioning of mail sorting and processing machines, leading to slower mail delivery in some areas of the country. The Columbus area is among those hardest hit by mail sorting reductions, according to a recent Washington Post report on the issue.

In addition, Ohio is one of 46 states that recently received a letter from the postal service warning that mail-in voting deadlines were too close to Election Day and could disenfranchise voters.

The July 30 letter states in part that “there is a significant risk that, at least in some circumstances, ballots may be requested in a manner that is consistent with your election rules and returned promptly, and yet not returned in time to be counted.”

In Ohio, the deadline for requesting an absentee ballot is noon on Saturday, Oct. 31. To be counted, absentee ballots must be postmarked by Monday, Nov. 2, or delivered to the county board of elections’ drop box by the close of Election Day.

Greene County Board of Elections Director Llyn McCoy said this week that voters who wait until the last minute to request an absentee ballot are unlikely to receive one in time to have their vote counted.

“Don’t wait to request a ballot,” she cautioned.

Many area voters aren’t waiting. McCoy said the county elections office is inundated with mail, far more than during a typical election year.

“It’s buckets of mail, rather than handfuls,” she said.

As many as 50% of Ohio voters are expected to vote by mail this fall, Ohio Secretary of State Frank LaRose has said. That’s more than double the approximately 20% who do so in a typical election.

But is voting by mail safe?

LaRose has vigorously affirmed the safety and reliability of voting by mail — provided that voters start the process early.

“Procrastination is a terrible idea as it relates to this election,” he said in an Aug. 12 press conference on election preparedness.

To vote by mail in Ohio, registered voters must first request an absentee ballot via an application form. Those forms are available now at VoteOhio.gov. Voters can download and print out the form, then mail it in to their county elections office. LaRose and others had urged the Ohio legislature to allow for online submission of absentee ballot requests, but state lawmakers declined to adopt such a measure.

While absentee ballot requests can be sent in now, and are being processed ongoingly by county elections offices, voters will not receive an actual absentee ballot in the mail until October. By Ohio law, absentee ballots must be sent out after the close of voter registration, which in this election occurs on Oct. 5.

The first wave of absentee ballots will be mailed on Oct. 6 to registered voters who requested them before July 29. Whether those ballots contain prepaid envelopes is still to be determined. If they don’t, voters will be required to affix appropriate first-class postage.

Asked at the recent press conference whether Trump’s attacks on mail-in voting were shaking voters’ confidence in casting their ballots by mail, LaRose defended Ohio’s absentee ballot system against such criticisms.

“The concerns [Trump] raises are not valid here,” he said.

LaRose referenced a recent Brookings Institution state-by-state voting scorecard that gave Ohio a “B” for its mail-in voting system based on factors such as all registered voters receiving an application and the lack of a need to state a reason to vote absentee. Ohio missed scoring an “A” because it lacks a universal vote-by-mail system, which just a handful of states have.

LaRose also added that he and his wife personally planned to vote by mail.

Area voters who wish to bypass the postal mail and return their absentee ballot requests or completed absentee ballots directly to the county board of elections may do so via the silver dropbox outside the elections office at 551 Ledbetter Rd. in Xenia. The dropbox will be available for that purpose beginning on Sept. 1.

Each county has just one dropbox. LaRose has declined to expand the number of dropboxes per Ohio county, saying doing so without an act of legislature would invite litigation. Ohio Democrats are suing for an increase in dropboxes, which they say is especially important in populous counties.

While some villagers at Saturday’s rally said they had experienced mail delays, others said mail service in the village seemed much the same as usual.

According to McCoy, however, the county elections office has seen delays in first-class mail delivery. The usual delivery time frame of three to five days has stretched to five to seven days, she said.

The statement acknowledges the “critical role” the postal service will play in delivering election mail this year, and affirms that the service is “ready, willing and able to meet this challenge.” It promises to suspend all postal changes until after the presidential election to “avoid even the appearance of any impact on election mail.” And it commits to specific steps such as not changing post office retail hours, not closing mail processing facilities and continuing a practice of approving overtime as needed.

However, DeJoy has said in testifying before the U.S. Congress that he will not restore decommissioned mail processing equipment or blue collection boxes that have already been removed.

Dunn provided some basic information about local mail delivery. Mail being delivered to areas immediately surrounding Yellow Springs, including zip codes that begin with 450 through 455, gets processed in Dayton. That includes mail that goes to Xenia, the location of the county elections office. All other mail gets processed in Columbus.

Other ways to vote

Mail-in voting is one of three options Ohio voters have this fall. Other ways Ohioans can cast their ballot include early in-person voting at their county elections office and voting at their polling place on Election Day, Nov. 3. The polling location for all Yellow Springs and Miami Township precincts is Antioch University Midwest, at 900 Dayton St.

At last Saturday’s rally, several area voters, including two Democratic candidates who spoke at the event, said in follow-up interviews that they planned to vote early in-person.

Desiree Tims, who is running for the U.S. House to respresent Ohio’s 10th Congressional district, said early voting is a tradition in her family, and she plans to go with her parents this year. Kim McCarthy, who is campaigning for state representative for the 73rd district, said she, too, was opting for early voting.

“There’s something exciting about it,” McCarthy said.

McCoy emphasized that people had voting options, even in this extraordinary pandemic year.

“We want people to vote by whatever method they’re comfortable with,” she said.

But she said she personally “wouldn’t depend on” voting on Election Day. While the polls are slated to be open, the experience of last spring’s primary shows that extraordinary changes can happen at the last moment amid the COVID-19 pandemic, she pointed out.

McCoy predicted lines at the county elections office for early in-person voting, which begins on Oct. 6 and continues through Nov. 2, and encouraged people to be patient. Early voting hours and location are available at the Greene County Board of Elections website, http://www.co.greene.oh.us/128/Board-of-Elections.

Poll workers and county officials will be wearing masks, and voters are urged to do so. No voter will be turned away for not wearing a mask — and masks will be available for those who need them — but every effort will be made to encourage mask-wearing, McCoy said.

The county is now recruiting poll workers, and is involving 16- and 17-year-olds as polling place greeters, with duties that supplement those of poll workers. McCoy said that a survey sent this summer to past poll workers in the county, many of whom are senior citizens, indicated that fewer than half felt comfortable working the polls this November.

And regarding the all-important ballot, a preview of this fall’s ballot with certified national, state and local candidates and county and local issues will be available at the county elections board website no later than Sept. 18, McCoy said.

After all, the mechanics of how you vote ultimately pales in comparison to, well, how you vote — what candidates, and positions, you choose.

“The vote is the most nonviolent tool we have,” Tims said on Saturday, quoting U.S. Rep. John Lewis, the civil rights leader and statesman who died this summer.