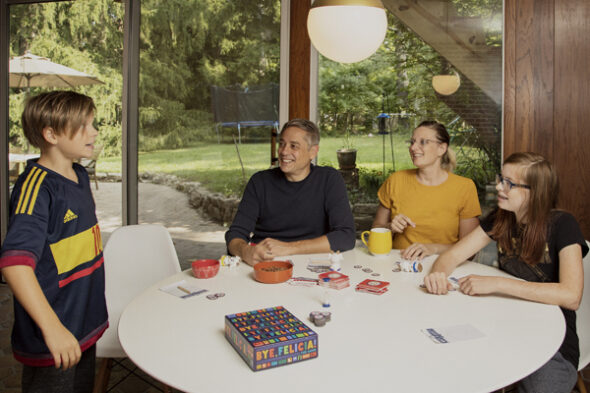 While families around the country continue to look for ways to have fun in relative isolation due to the pandemic, one Yellow Springs family is feeling the pride of having contributed to the growing pool of home-based activities: earlier this year, villagers Corrie Van Ausdal and Matthew Collins helped create two brand new tabletop games.

Collins and Van Ausdal were hired to generate content for “Bye, Felicia!” and “Who’s the G.O.A.T.?” — games created by Nashville-based game company Big G Creative. The couple got involved when a former classmate of Collins, whose spouse works for the game company, suggested that the two might be good candidates for the job.

“We’re smart, funny and hip,” Collins said — with a grin — during a recent Zoom interview. “And maybe it also helped that our kids are within the age ranges that the games were made for.”

Big G Creative has spawned 14 games since 2017 that are aimed toward families of smart, funny and hip people — particularly those with a predilection for pop culture. The company’s offerings include a spate of 1980s references — there’s “The Trapper Keeper Game,” two separate games based on soft-spoken PBS painter Bob Ross and the alluringly titled “Kenny G: Keepin’ It Saxy.”

“Corrie and Matt were highly recommended to us,” said Shannon Swindle, Big G Creative’s director of product development via email last week. “They were able to jump right in and meet our production schedule.”

The new games that Collins and Van Ausdal worked on are based on phrases common in current pop culture: “Bye, Felicia!” is a popular dismissive parting phrase originating from the 1995 movie “Friday,” and “the G.O.A.T.” is short for “the Greatest of All Time,” a phrase sometimes attributed to Muhammad Ali, in reference to himself. Players of “Bye, Felicia!” use word association to try to match answers with one another within a time limit — lest they be dismissed from the game with the titular phrase. In “Who’s the G.O.A.T.?” players use squishy G.O.A.T. figurines to compete against one another and find out who’s the best at a series of challenges.

Both games are based on drawing cards from a deck, and Van Ausdal and Collins were hired to come up with the content displayed on each of those cards.

“The company gave us an outline of the rules and a few examples of the kind of content they needed for the cards and we got to work,” Van Ausdal said.

According to Swindle, Big G Creative typically works with its team of creatives — inventors, writers, editors, graphic designers and artists — to bring their games to life. When a game is particularly content-heavy, the company might also employ freelancers like Collins and Van Ausdal in order to make sure the content of their games remains appealing to a diverse audience.

“It’s always helpful to have a unique perspective, and another set of eyes and a fresh look at a game often yields some terrific new ideas and creative content,” Swindle said. “A variety of content is important to ensure the games are fun for all ages.”

With all ages in mind, Collins and Van Ausdal, in turn, enlisted the help of their kids — eighth grader Tiger and fourth grader Theo — to contribute to the project. They were also paid for their work, as Van Ausdal and Collins shared their compensation with both kids.

The whole family spent their late winter working on the games, coming together in evenings after work and school to brainstorm ideas. Each family member would write ideas on index cards — “the cards helped things feel similar to how the game would work,” Van Ausdal said — and any idea they liked would be recorded by Van Ausdal in a running spreadsheet.

“It was the time of year when it’s cold and it gets dark early, so it was something fun we could all do together,” Van Ausdal said. “Sometimes it was really free-flowing and the ideas would come easily, and other times it really was a lot of work.”

Before being hired to work on the games, Van Ausdal and Collins were already devotees of the art of the tabletop game — they have a long relationship with the settlement-building board game “Catan,” and the whole family have developed something of a Yahtzee expertise.

“We can sometimes be extremely competitive,” VanAusdal said, shooting a pointed look at Collins — and receiving one in return.

The family’s knowledge of games — and their collective competitive streak — has given them a certain amount of insight on what makes a good game.

“The rules need to be simple enough that you can learn them quickly,” said Van Ausdal. “If a game involves a 30-minute long session of explaining rules, that doesn’t work for everybody.”

Collins suggested that the best games also don’t require any particular skill set in order for players to win.

“Those kinds of games are especially good for families, because you might have a range of ages — so the 7-year-old is as likely to win as the 40-year-old,” he said.

Despite the family’s wisdom on good games and their newfound industry experience, Collins — a professional photographer by day — said he couldn’t imagine creating a game from whole cloth in its entirety.

“I look at some of the game ideas and think, ‘How did they come up with this?!’” he said. “It’s not my type of problem solving.”

Van Ausdal, on the other hand, said she could envision taking a crack at it — as a kid, she and her friends would try making up games using the playing pieces from “Trivial Pursuit,” which they played often. As an adult — and a seasoned playwright and performer — she has also dreamed up her own game idea based on improv comedy, though before she worked with Big G Creative, the task seemed herculean on her own.

“Now I know you can get other people to come up with some of the content for you!” she said.

Van Ausdal and Collins have since played “Bye, Felicia!” and “Who’s the G.O.A.T.?” with two other families in physically distanced settings. Having seen how the proverbial board game sausage was made has, they said, added a new layer of interest to game playing.

“It’s exciting for me, because I’ll remember what we were thinking of when we came up with a certain card, and it’s interesting to see if people play it like we thought they would,” Van Ausdal said.

“It’s also interesting to see what kinds of answers you get to your questions based on players’ ages,” Collins added. “Everybody might have the same answers for ‘Star Wars,’ but for something like ‘teen pop stars,’ different generations might say different things.”

Van Ausdal said she thinks the games her family helped create follow their “good game” criteria nicely — but that, at their cores, games are about having fun with people you like, and any game that can facilitate that is a good one.