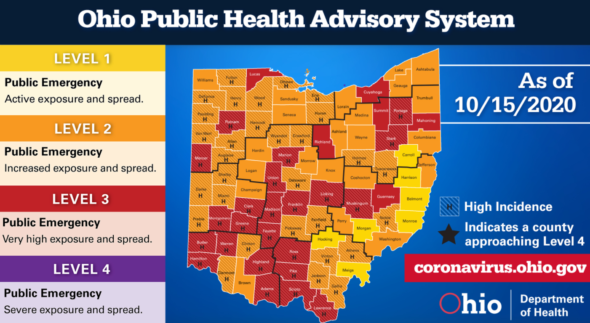 Greene County on Oct. 15 was elevated to "red" in Ohio's COVID-19 warning system. The county has seen a surge in COVID-19 infections over the past several weeks.

For the first time since the Ohio Public Health Advisory System was introduced in early July, Greene County has been elevated to level 3, or “red,” on the state’s four-level weekly warning system based on a high incidence of COVID-19 cases. The new level was announced on Thursday, Oct. 15.

Red is one level below the most severe level, purple, which no Ohio county has reached to date. As of Oct. 15, 29 of Ohio’s 88 counties were red. Southwestern Ohio currently has the greatest concentration of red counties.

According to the state reporting, which is available here, Greene County’s concerning indicators are as follows:

Prior to this week’s shift to red, Greene County had been at alert level 2, or orange, for most of the weeks since the alert system was introduced.

The county is now reporting a total of 1,976 confirmed and probable COVID-19 cases since the start of the pandemic. Half of those cases have been added since late August, News tracking shows. The county is now adding just under 30 cases per day, based on a seven-day moving average, also tracked by the News.

Greene County has seen 162 people hospitalized by the illness, and there have been 39 deaths.

“All residents should maintain a healthy respect” for COVID-19, she is quoted as saying in a press release. “If you have become complacent about social distancing, handwashing and wearing a mask, or lulled into a false sense of security, now is the time to take action to protect you, your family and the community,” she said.

The Oct. 15 issue of the News contains an in-depth update on COVID-19 in the county. The article went to press prior to the county’s most recent elevation to red.