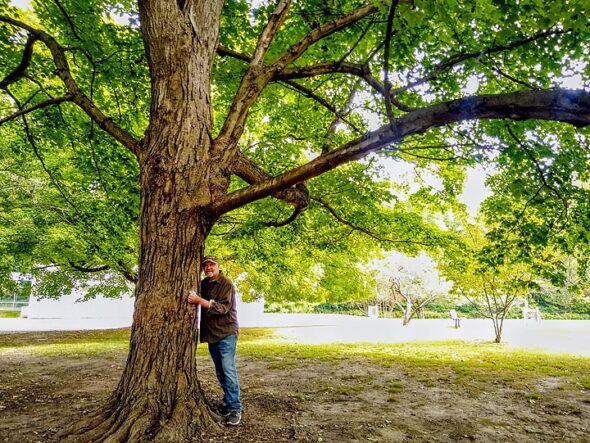 After 27 years at the helm of Wavelength Aveda Salon and Spa, Gary Glaser closed its doors in September. He’s pictured in Beatty-Hughes Park with his favorite tree, which he said he’s often visited over the years when he needed to connect with nature. (Photo by Lauren "Chuck" Shows)

At Wavelength Aveda Salon and Spa, Gary Glaser has spent nearly three decades getting close to the people of Yellow Springs — both physically, when he would cut their hair, and in terms of personal connection.

“When a person is in your chair, they’re the most important person in the world at that moment — I give them a listening ear, and as much as I give to them, they give it back to me,” Glaser said in a recent interview.

The inability to maintain this closeness over the past six months of the ongoing pandemic helped Glaser make the decision to close Wavelength after 27 years.  The business closed in September.

Business occupancy requirements meant that Glaser had to reduce the number of clients he saw at a time, cutting the salon’s income in half. It also meant stringent safety measures that affected the friendly intimacy that he typically shared with his clients.

“It wasn’t as fun as it used to be — and that kind of forced me to realize it was time to move on,” Glaser said. “But it was a hard decision to make.”

Glaser has spent the majority of his life interested in caring for the hair of others. As he was growing up in Chicago, he said, his aunt was a well-respected hairdresser from LaGrange, Ill., and she often worked in his childhood kitchen, performing beauty treatments around him and his numerous cousins.

“You can imagine, being the only male out of 15 cousins — I was around it all the time,” he said. “There was no way I was not going to be a hairdresser.”

In high school, Glaser participated in a dual enrollment program that allowed him to pursue his study of hairdressing; he graduated in 1969 with both his high school diploma and his license in cosmetology. He soon set out on his own, opening his first salon in Chicago when he was 20. He ran that salon for 11 years before moving to the Dayton area and opening a salon in Oakwood.

Living in Dayton, Glaser would often visit Yellow Springs. He found himself falling in love with the town during his visits — with the people who lived here, and with what he perceived as a spiritual nature that felt critical to his life.

“I always found myself coming here to get revived,” he said. 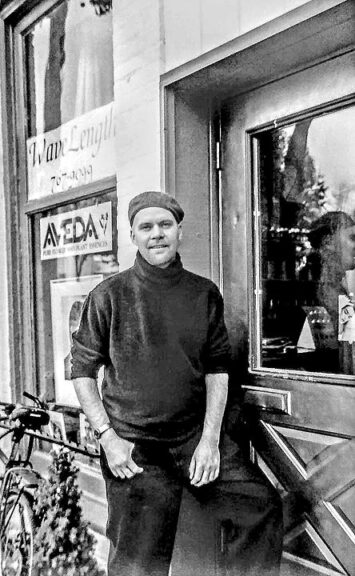 After a few years, he decided to make Yellow Springs his home — not just for himself, but for his business as well. He said he had previously been advised by fellow Miami Valley residents that Yellow Springs might not be the best location for a new salon — “people in Yellow Springs don’t get their hair done,” he was told — but found this not to be the case. In fact, he said, Wavelength has done good business over the years, bringing in not only locals from both town and gown, but out-of-town visitors.

“The world came to Yellow Springs — and my salon,” he said. “I didn’t need to go on vacation to see the world!”

Glaser said that opening a salon in a small town like Yellow Springs gave him a unique perspective. Having first worked in the Chicago community of Rogers Park, he said his time in the village felt more like those early days than his time in Oakwood.

“All of Chicago’s communities are their own little worlds — I didn’t feel that in Dayton,” he said. “Coming to Yellow Springs was like that same little community in a big fish bowl.”

That small-town feel, combined with the natural conversation that happens when one goes under the scissors, meant Glaser spent years getting to know people, hearing about their families, their goals — even their secrets.

“People tell you a lot of things — sometimes I’d know about things even before the newspaper did!” he said. “In this job, you have to know how to use good judgment about what you repeat.”

Over the years, Glaser has observed changes in hairstyles — “I’ve been around long enough to see styles come and go and come back again” — and in the village itself. One thing about the village that hasn’t changed is its proximity to nature. It’s one of the things that drew him to the village nearly 30 years ago, and something he said he’ll miss the most about living and working in the village. For much of his time as a villager, Glaser lived on Glen Street, which he considers a “healing street.”

“I had the whole Glen for my backyard,” he said.

Glaser said he would often visit nearby Beatty Hughes Park on his way to and from his Glen Street home. While being interviewed for this story, he walked into the park to point out his favorite tree, a sprawling maple, and put his hands on it with reverence.

“I used to walk through and give this tree a hug when I needed it,” he said.

It’s all part of what Glaser calls the village’s “spiritual vortex,” which he described as a place of healing energy. He laughed, remembering how folks would describe Yellow Springs to him before he moved into town.

“They used to say, ‘Yellow Springs is full of witches!’” he said. “That sounded good to me, because my great-grandmother was a ‘witch’ — really, she was a Russian herbalist — and I was ready to get back to the metaphysical.”

Glaser now lives in Dayton’s Huffman Historic District. He bought a Victorian-era home there, which he described as being a “total rehab project,” a few years ago, and has been working to restore it since then. He looks forward to spending more time on preserving the home in his retirement.

“I have three cats, a dog and a Victorian home, so I’ll never be bored,” he said.

Apart from nature, Glaser said he’ll miss the many friends he’s made from his Corry Street storefront. Indeed, while he was being interviewed outdoors downtown, he was interrupted in his musings several times by greetings from passersby. Especially important to his time here, he said, were his two co-workers, nail tech Shelley Wallace and aesthetician Kristl Mapes, who he said had been at Wavelength for 19 years and stayed with him until the closure of the business.

“They were incredibly supportive co-workers — Wavelength wouldn’t have been in operation without them,” he said.

Glaser said his decision to close Wavelength was difficult, but quick — and the ongoing pandemic meant eschewing a proper farewell to all his former clients before closing.

“I didn’t get a chance to say ‘goodbye’ to everyone — but I hope everyone knows how thankful I am and how much I’ll miss them,” he said.

It’s not farewell forever, though — Glaser said he’ll return to the village when he can to see friends, walk in the Glen and visit his favorite tree.