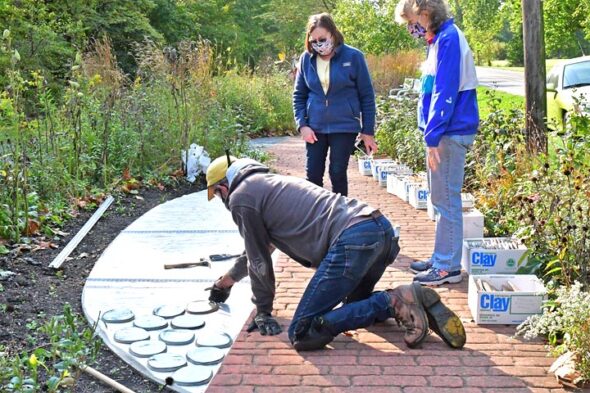 Susan Stiles, back left, and Evelyn LaMers watched as Ben Cooper, of Gregor Construction, installed new tiles at the Women’s Park on Corry Street. LaMers designed and created the tiles, and Stiles managed their sale and installation. (Photo by Kathleen Galarza)

Though the flowers in the Women’s Park on Corry Street have begun to wither as fall deepens, something new has just bloomed there: in early October, a collection of 124 new tiles bearing the names of local women emerged.

The new addition is the fruit of a labor of love that began last summer, when the committee of the Women’s History Project of Greene County, which oversees the park’s upkeep, put out the call that a limited number of new tiles would be available. The committee comprises members Macy Reynolds, Deb Henderson, Sandy McHugh and Joan Ackerman.

“It was the first time in more than 10 years that we’ve added new tiles,” said Susan Stiles, who managed the sale and installation of the tiles. “I think that’s why they sold out so quickly!”

The Women’s Park was the brainchild of villager and women’s rights activist Gene Trolander, who envisioned a way to celebrate the lives of local women. As Henderson told the News when the park celebrated its 20th anniversary in 2018: “Over and over, Gene said, ‘Women are the people who take care of the world. They need to be honored.’”

Henderson designed the park, which features benches and a walkway winding through the tiles and native flowers on a narrow strip of land donated to the project by the Village. All of the 931 tiles that have been installed in the park over the years, which include not only the names of women but also personalized descriptive statements about them, were designed and handmade by local artist Evelyn LaMers of YS Pottery.

Trolander died in 2000, two years after the park was opened. Her vision was honored in 2018, when the Women’s Park received the Village Inspiration and Design Award, or VIDA. The year also marked the park’s 20th anniversary. In August of this year, the World House Choir hosted a tribute to the 100th anniversary of women’s suffrage in the park.

The new tiles were installed by Tommaso Gregor and Ben Cooper, of local company Gregor Construction. The tiles bear the names of many well-known current villagers, like Mayor Pam Conine and WYSO’s Neenah Ellis, and some pay tribute to the memory of villagers who are gone, such as the News’ own Lauren Heaton. A few names are even duplicated, as more than one tile purchaser felt the desire to honor them. Stiles said many of the tiles were purchased as surprises — Stiles herself bought one as a surprise for her friend Beth Rubin.

“I went out and took pictures of the tile after it was installed and sent it to her,” she said.  “[Rubin] said it made her day.”

The cost of the tiles — $65 each — funded their creation and installation, but many of those who bought tiles also donated extra money toward the park’s upkeep. In all, tile purchasers donated $826 to the park.

Stiles said the donations, which go into the Gene Trolander Memorial Women’s Park Fund managed by the YS Community Foundation, pay for things like mulching and the removal of dead plants — things the group of volunteers who regularly tend to the garden and walkway can’t do on their own. The funds also provide volunteers with gloves, knee-pads and other gardening aids.

Stiles herself is a regular volunteer, along with park designer Henderson and Ohio Master Gardener Macy Reynolds, among others.

“[Reynolds] is the expert that we look to — she can identify anything and everything,” Stiles said.

The Women’s Park volunteers spend time working at the garden almost every week, according to Stiles.

“It’s a tremendous job maintaining all the flowers, and it’s just one of the most beautiful places around,” she said.

The ongoing pandemic has made it a little more difficult — “All of us who are gardening are older, so we’re being cautious with our health,” Stiles said — but the work continues, with volunteers weeding and planting, masked and at a safe physical distance. Stiles said the volunteers do some of their hardest work in the weeks before holidays roll around.

“We figure a lot of people are going to come by on the holidays — we always want the tiles to look good,” she said.

No ceremony is planned for the new installation, which was true of the 2002 and 2008 additions as well — only the original tiles were feted in 1998. Stiles suggested that no ceremony could equal a visit to the garden itself.

“Take a walk and look at all the names and read the stories — that’s the best way to celebrate,” she said.