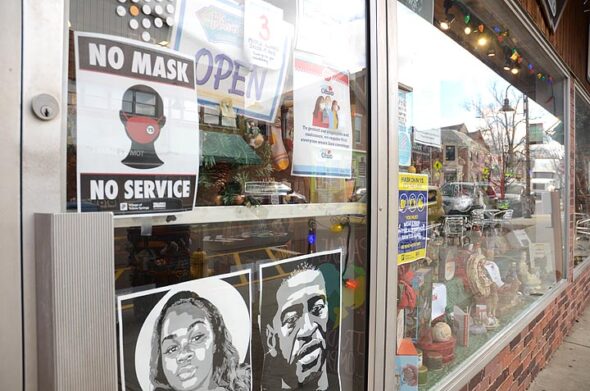 Retailers and other establishments around the village displayed a new poster notifying potential patrons that masks are required for service. The statewide mask order was initially issued on July 23 by Gov. Mike DeWine, and revised last Wednesday, Nov. 11, in response to dramatic increases of new COVID-19 infections. Yellow Springs passed its mask mandate on July 8. (Photo by Matt Minde)

As the third wave of the coronavirus rages through the state and county, the Village of Yellow Springs is cracking down on behaviors that could further spread COVID-19 in town.

Village Council approved a resolution and a series of protocols at its Nov. 16 regular meeting that would increase enforcement of local COVID-19 restrictions and state orders.

Yellow Springs Police will start citing those who don’t wear a mask downtown. Sidewalks where people are congregating will be cleared. And businesses not enforcing mask wearing or social distancing in their shops will be warned and then shut down for 24 hours.

Council President Brian Housh led the renewed effort, saying this week the measures were akin to the Village “upping its game related to the COVID-19 response.”

“We’re looking at how we can respond to both keeping our community safe and supporting our businesses so we can avoid another shutdown,” Housh said.

On July 8, the Village approved an ordinance requiring masks be worn in public downtown, three weeks before the state passed its own mask mandate. But so far, the YSPD has issued no citations for those not complying. Housh wants to see that change.

“We are going to be more strict about issuing citations,” he said this week.

According to the new protocols drafted by Housh, YSPD will patrol downtown hourly, and respond immediately to a report of someone without a mask or not distancing. If an officer encounters someone not wearing a mask they will offer one. If the person refuses, the officer will issue a citation. If the person claims a medical exemption, the officer will ask them to distance from others by six feet. If they refuse to do that, the officer will cite them.

Housh said he also wants police to use photographs as evidence of those disobeying the mask rule.

“In my mind, that photo evidence is helpful in confirming that someone is not wearing a mask,” he said.

The resolution also highlights the problem of “sidewalk obstruction,” and allows local police to cite vendors who are set up on sidewalks, or whose patrons are blocking the sidewalk. That includes restaurants and coffee shops whose tables are located on sidewalks and vendors who are located on private property but not making sure their patrons maintain social distance, according to Village Solicitor Breanne Parcels.

“If you’re putting a card table up to sell something on a sidewalk and encouraging congregation, that is inherently violating the state order,” Parcels said. “We’re prohibiting blocking the sidewalks because we want to promote distancing.”

The protocols also lay out the steps that local law enforcement will take to enforce a new statewide order related to businesses.

On Nov. 13, the Ohio Department of Health released a new order putting the onus on businesses to make sure their patrons are wearing face masks and social distancing. It also requires them to erect signs stating masks are required and make hand sanitizer available. The order comes with heightened enforcement, as businesses who fail to comply will first be warned, then shut down for 24 hours.

The order specifies a state agency that would inspect businesses: the Bureau of Workers’ Compensation Retail Compliance Unit. But it also names the local health department and local law enforcement as having the ability to enforce the order. Housh believes local police should take the lead in town, as other agencies have too much on their plate.

“The new Bureau of Workers’ Comp task force is going to be overwhelmed, as have been the public health organizations across the counties,” he said.

The signs, created in partnership with the Yellow Springs Chamber of Commerce, are a marked shift from messaging earlier this year that focused on wearing masks to “be kind.” The new signs, in stark black and red colors, simply state, “No mask, no service.”

“We decided it’s going to be bold and clear,” Housh said of the new messaging.

After delivering the signs, Carlson reported that most business owners were receptive, but a few were resistant.

“Today we did experience a couple of antagonizing moments,” Carlson told Council.

Previously, Carlson identified two Dayton Street businesses opposing restrictions such as mandatory masks — Spirited Goat Coffeehouse and Starflower Natural Foods. Without naming them this week, Carlson noted that the department will focus on compliance at those two shops.

“We will be working with those two proprietors and their patrons to try to keep everyone safe,” he said.

Council’s resolution also notes that local police have the ability to hand out more severe punishments due to a municipal ordinance and state statute addressing “exposing others to contagion.” Individuals or business owners could be cited to Xenia Municipal Court with a second-degree misdemeanor for those violations.

Council member Laura Curliss and Chief Carlson both expressed some reluctance to go to that level of escalation. Curliss noted that citing someone to the Xenia court system can lead to serious legal issues. Carlson worried that enforcement, particularly of those congregating outside of businesses, may “escalate to violence.”

“We have someone in unchartered territory here and I need to make sure that the team understands, and that you understand, that it’s not quite as easy as on paper,” he said.

Council member Lisa Kreeger agreed with the new measures, noting specifically that it is “physically impossible to physically distance on a public sidewalk.” The growing spread of COVID-19 means villagers have to take precautions seriously.

“We’re at a crucial tipping point, now more than ever,” she said.

The resolution passed in a 4–1 vote, with Council members Marianne MacQueen and Kevin Stokes joining Housh and Kreeger to vote yes. Curliss voted no.

Housh ended the agenda item with a plea to villagers to follow the orders.

“If you really care about saving the village, you will follow the protocols, you will wear face coverings, you will distance and you will sanitize,” he said.

The heightened enforcement comes as Ohio experiences its worst outbreak of cases since the start of the pandemic, after smaller first and second waves during the spring and summer.

The Village is pivoting to a stricter approach after less punitive efforts to gain compliance with coronavirus-related restrictions.

Yellow Springs Police have previously relied on a softer, “community policing” approach to encourage those who are not wearing masks downtown to do so, without having to resort to citations. Carlson said its response has mostly worked well.

“We are trying to tread lightly, keeping in the method of policing we’re trying to achieve here,” Carlson said.

Most unmasked visitors, when given free masks, will don them immediately, Carlson added. Local police, and Village “mask ambassadors,” who set up a table downtown this summer, have given out a total of 3,300 free masks.

“If we encounter the same individuals on a daily basis and continue to provide them a mask, that’s difficult,” Carlson said, especially as some of those individuals are already facing legal trouble.

Housh said this week he wants to balance community policing techniques with the need to enforce mask rules to ensure public safety. After all, the citation is a civil, not a criminal penalty, he said, and requires an appearance at the local Mayor’s Court, not Xenia Municipal.

Housh worries about visitors “endangering our citizens” by flouting mask rules. Having initiated the mask ambassador program, he observed some worrisome behavior while downtown handing out masks for five straight weekends.

“I’ve felt the anger and rage of people who did not want to follow these measures,” he said.

Since the mask rules went into effect in July, local police have received six calls for service for someone not wearing a mask in public, according to Carlson this week. Local police have initiated 18 mask-related interactions, and logged 80 community policing foot patrols downtown to check for compliance. They have given no warnings or citations for not wearing a mask.

With the new protocols in place, that may change.

“I’ve made it pretty clear that I want to see citations,” Housh said.

Carlson agrees the other approach may have to change.

“We don’t want an occupying force wandering around,” he said of local policing downtown, “but we may have to step up our enforcement.”

Meanwhile, most local businesses have been doing a good job of complying with state health orders, Carlson said, with the exception of a few holdouts.

In May, when retail stores and restaurants were permitted to reopen, local police assisted by marking floors to designate areas six feet apart. In addition, Miami Township Fire-Rescue helped local businesses determine their new capacities, which for retail establishments were set at 50% of the fire code. Restaurants were given more flexibility when it came to reduced capacity.

According to Miami Township Fire Chief Colin Altman, the department worked with “pretty much every restaurant in town” to set capacities and figure out floor spacing, and followed up with restaurants to see how it was working.

“In the first couple of weeks, our inspectors did pop in to make sure everything was flowing smoothly,” he said.

“We did everything we could to make it as easy as possible for restaurants when they reopened,” Altman added, noting that local proprietors took the mandated precautions “very seriously.”

In one case, the local fire department waived a fire code requirements in order to allow Peach’s Grill to erect tents in front of its restaurant.

“A health inspector has to see something,” he said. “I know they have had complaints here in town, but when [public health] gets there they are in compliance.”

There are other issues with enforcement, Altman noted.

“They are having a tough time of keeping up and not everyone tells public health when they see something,” Altman said.

Carlson said he was aware of three county inspections at Spirited Goat Coffeehouse. Each time, they passed.

But now that businesses can be shut down for 24 hours, Carlson is hopeful businesses will work harder to comply. He also encourages villagers not to engage with someone who is exhibiting unsafe behavior, but to call the local police non-emergency number, at 937-767-7206.

Especially with hand sanitizer required in every business, “we will continue that committment now,” Salmerón said at Council.

Other items from Council’s Nov. 16 agenda will be in next week’s News.