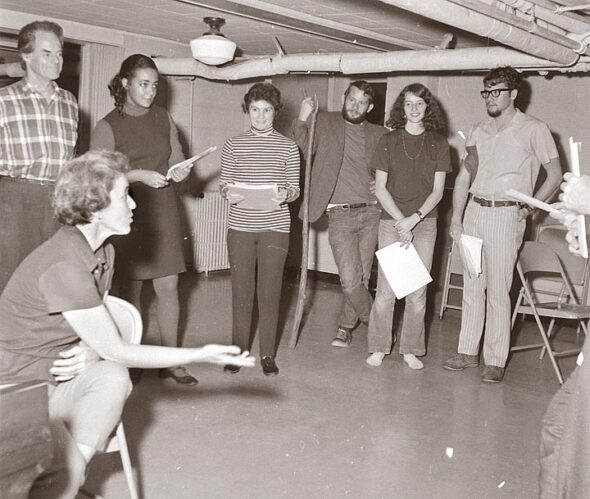 Antioch leaders propose a community-friendly gym. “We have a vision for a campus that is much more thoroughly integrated into the Yellow Springs community than it was before, and more integrated than at most communities with liberal arts colleges …”

Class of 2020 Initiative. The Yellow Springs school board hired a consultant firm. “KnowledgeWorks [www.knowledgeworks.org] is a developer of new approaches to high school education that replace traditional textbooks and lectures with project-based, student-led  investigation.”

Andrew Benning, Ralph “Butch” Heaton and Meredith Dallas died. The passing of this trio symbolized the passing of a village generation. Benning was the long time meter reader who literally knew every address in town. Heaton ran Bales Chevrolet car dealership at 100 Corry St. Dallas was a key in the Antioch College “Shakespeare Under the Stars” series and the Antioch Area Theatre in the 1950s and ’60s, with a teaching career at the college for decades.

Protest targets bow hunt in park. “Accompanied by the beat of a drum, a crowd of demonstrators lined the entrance to John Bryan State Park Sunday to protest a decision to allow deer hunting in the park. … Thirty bow hunters will be allowed to hunt over a three-month period.”

Dave Chapelle to perform here in benefit for AACW. “The cost for ‘Dave Chappelle: A Comedy Night Out and Dance’ is $7 at the door.”

Green-built or greenbelt. “Cernitin America plans to expand its national headquarters in Yellow Springs by building a ‘complete campus facility.’ It will cost between $25 and $30 million … on a site, yet to be purchased, in or very near Yellow Springs.” Cernitin tried to buy the Sutton Farm northeast of town from the Village. Because that farm had been purchased with federal conservation money to be part of the greenbelt, some residents successfully opposed the sale. That group then formed the Tecumseh Land Trust.

Hippie Haven. “A ‘spiritual caravan’ of 200 members of the ‘Monday Night Class’ [from San Francisco] with their buses, campers and trucks came to Yellow Springs this weekend. …  When arrangements were being made for his visit here, Steven [Gaskin] asked if he could ‘bring his family’ and was told that would be fine. But when he showed up here with 200 people, there was some quick scrambling to find places for all the vehicles.” After visiting the Vale community outside Yellow Springs, Gaskin and his group founded an intentional community, The Farm, which continues in 2020 near Summertown, Tenn.

First Women Vote. “The election here was one of the most exciting of many years due to the heavy vote caused by the women voting. Mrs. Paul Weiss had the honor of being the first woman to cast a vote. She was at the polls before they were opened at 5:30.” [The paper was not clear whether this was a.m. or p.m.]