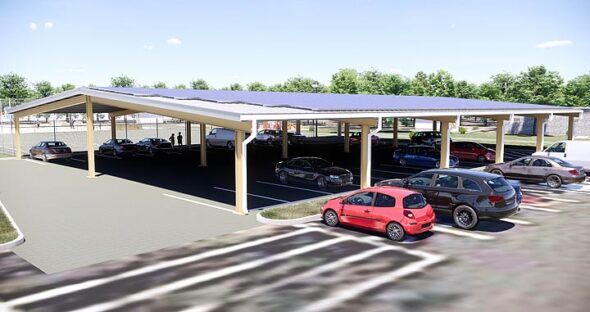 A rendering of a new solar canopy at the John Bryan Community Center shows a 200-kilowatt solar photovoltaic array over a parking area that could also be used for community events. The Village is exploring several new solar installations on municipal property with Solar Power & Light of Miamisburg, which produced the graphic. (Rendering by Solar Power & Light)

The Village of Yellow Springs is looking to get even greener with an array of solar photovoltaic projects slated for municipal properties in town.

Village Manager Josué Salmerón pitched some preliminary concepts at Council’s Dec. 7 virtual meeting and was given the green light to come back with financing options.

Initial plans call for a solar canopy at the John Bryan Community Center. The covered pavilion would feature a solar roof with at least a 200-kilowatt capacity, with vehicle parking and event space underneath. It would be located where a parking lot expansion recently took place and where the Yellow Springs Farmers Market currently operates.

“It’s a strategy to increase our renewable energy assets in our portfolio while also looking to meet the need in our community for public spaces,” Salmerón said of the idea.

The Village may also put solar arrays at the Gaunt Park pool, on unused land at the municipal wastewater treatment plant and at the Sutton Farm public works headquarters. Together they could produce between two and three megawatts, Salmerón reported.

“The Sutton Farm is an excellent site to put additional solar,” he said of the property located along State Route 235. “We’ve got a big, open green space that has a lot of a solar exposure.”

The concepts were created in collaboration with Solar Power & Light, a Miamisburg-based solar energy developer. The company previously worked with Antioch College on a one-megawatt array on the Antioch golf course.

The Village currently has a one-megawatt solar array at the Glass Farm property, which was developed with American Electric Power in 2017. Including outside renewable sources, the Village’s electric portfolio was 83% green last year.

More local solar projects would mean the Village would not have to purchase electricity from outside the Village, leading to ancillary benefits such as lower transmission costs and reduced electricity load during peak times, Salmerón explained. One of the Village’s electric contracts is slated to expire next year.

As for cost, the initial solar canopy design comes with a price tag of $472,000, while a completely covered canopy (see rendering above) would cost between $700,000 and $750,000, according to Salmerón. Some of the cost could be offset by the amount the Village currently pays for electricity, which is about $162,000 per year, according to the presentation. Financing could come from revenue bonds, with a variety of shared ownership possibilities with Solar Power & Light.

Council Member Laura Curliss asked if the cost outlays would be “above and beyond” what was discussed as part of the Village’s 2021 capital budget conversation earlier in the meeting. Salmerón responded that the cost would be akin to the Village “installing electric capacity.”

“It will be a capital outlay but it will be supported by its own revenue stream,” he said, referring to payments by electric utility customers.

“We would not bring this to Council if we did not have a good idea that it would be financially feasible and it speaks to the values of Council and the community,” Salmerón also said.

Council Member Marianne MacQueen responded favorably to the solar pavilion idea, especially if it continued to host the farmers market and other events.

“I think that it is … an environmentally sound investment in terms of energy production, supporting local food production and supporting our local economy,” she said.

In the chat section of the Zoom meeting, citizen Franklin Halley wrote that the “pavilion project with weather protection is exciting and a great idea.”

Other items from Council’s Dec. 7 agenda will be covered in an upcoming issue of the News.