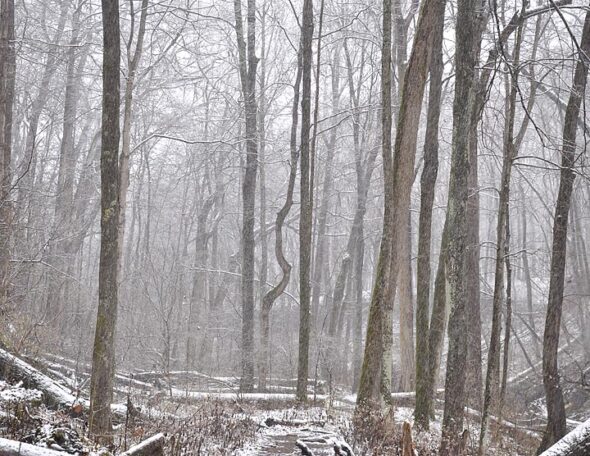 Glen Helen was ghostly on Monday afternoon, as snow that began in the morning continued through the day and into Tuesday. The season’s first snowfall came ahead of Tecumseh Land Trust’s annual Winter Solstice Poetry Reading, to be held this year on Friday, Dec. 11, at 7 p.m., via Zoom. Beyond sharing poetry from area poets, the reading serves as a fundraiser for TLT and the Glen. This year’s theme is “The Healing Earth.” (Photo by Audrey Hackett)

Gone are the magics and songs,
all the things our grandmothers buried —
piles of feathers and angel bones …

—From “I Come From a Place So Deep Inside America It Can’t Be Seen,”
by Kari Gunter-Seymour

Kari Gunter-Seymour’s poetry is nourished by family and the land, the magic of old stories and half-forgotten lifeways. A ninth-generation Appalachian from southeastern Ohio, she grew up in a storytelling culture that takes its lore, and its livelihood, from the land. Her grandparents were “sustaining farmers” — people who lived by the land’s bounty, or its leanness.

“Try to get through the winter without going to the grocery store,” Gunter-Seymour said with a laugh, recalling the ingenuity and resilience of generations of Appalachian women and men. She spoke with the News by phone from her home near Athens, Ohio, in advance of an upcoming reading in Yellow Springs, happening via Zoom.

As a poet, Gunter-Seymour is devoted to telling the stories of “my people,” Appalachians from parts of Ohio, West Virginia, Kentucky, Tennessee and elsewhere. Bound by culture and tradition, these diverse communities have long been misunderstood by people from outside, according to Gunter-Seymour.

“Appalachians are one of the last to be recognized as a ‘minoritized’ culture,” stigmatized by damaging stereotypes, she said. Her work delivers a different message: “We persevere.”

Addressing those themes through personal history is her latest collection, “I Come From a Place So Deep Inside America It Can’t Be Seen,” published last spring by literary press Sheila-Na-Gig. Gunter-Seymour has been published regionally and nationally, and she collaborates with other women artists as part of the Women of Appalachia Project, a nonprofit arts organization she founded in 2009. Trained as a graphic designer and photographer, she is retired from the E.W. Scripps School of Journalism at Ohio University.

“I’m a storyteller — my poetry is very narrative. Lots of characters run around in my poems,” she said. A poem is like “the abbreviated version” of a story, she explained. “It doesn’t lack in detail. It just dances a little bit faster.” 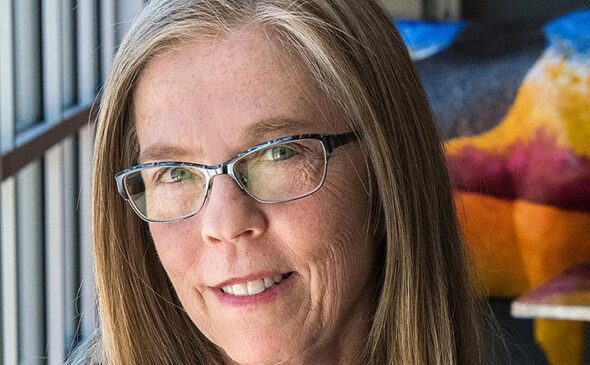 Ohio Poet Laureate Kari Gunter-Seymour will read from her work at this year’s Winter Solstice Poetry Reading, held on Friday, Dec. 11, at 7 p.m., via Zoom. (Submitted photo by Meagan Hall)

2014 to “foster the art of poetry, encourage literacy and learning, address central issues related to the humanities and heritage and encourage the reading and writing of poetry across the state,” according to a description from the Ohio Arts Council. She previously served two terms as the poet laureate of Athens.

Workshops, readings and other public appearances are core to the state laureate role. Beginning her two-year term amid a pandemic, Gunter-Seymour has been largely limited to Zoom activities. Yet the online format has also freed her to take part in many more events than she would otherwise be able to attend — nearly 50 since July, reaching people across Ohio.

“It’s been outrageous and absolutely wonderful,” she said.

And next week, Gunter-Seymour will appear before local audiences at a virtual version of Tecumseh Land Trust’s Winter Solstice Poetry Reading. The ninth annual reading is being held Friday, Dec. 11, at 7 p.m., via Zoom. To register, email sunflowers@tecumsehlandtrust.org and you will receive a link for the event. Attendance is free, but a donation of $5 or more is suggested. As in past years, funds raised benefit Tecumseh Land Trust and Glen Helen. Donations may be made online at tecumsehlandtrust.org.

The reading has been streamlined somewhat for Zoom, according to organizer Ed Davis. Fewer poets have been invited, and each will have a longer time to read, about eight minutes. There will not be an open mic this year. The reading is an annual project of Tecumseh Land Trust’s education committee. Previously held in Glen Helen’s Vernet Educational Center, the event in its online format benefits from the tech help of education committee volunteers Matt Birdsall and Melissa Bautista.

Though unavoidably mediated by technology, the 2020 reading invites poets and audience members to reflect on “The Healing Earth” — this year’s theme. Davis said he chose the theme based on current events, as well as the eternal possibilities of renewal inherent in Winter Solstice.

“I came up with that theme because I knew, after the election, we’d all need healing,” he wrote in an email. “But beyond that, whenever there’s a big seasonal shift directed by planetary movements, that’s always a time for reflection and personal realignment — and the potential for healing.”

Poet and villager Frances Simon said she is deeply attracted to the theme. A former counselor and hospice volunteer who has been writing poems for 25 years, she often writes about death and loss. But she doesn’t see these experiences as morbid. On the contrary, they have the potential to be life-enhancing.

“Death is transformation and beginning again,” she reflected. Themes of rebirth and renewal are especially potent around the Winter Solstice. “In the dark, during that really long night, we’re hoping that the light will come,” she said.

In Simon’s experience, an attunement to death and endings can fuel an urgent joy in living.

“You have the freedom to spend your lifetime any way you want to. And once you spend it, it’s gone,” she said.

The theme also resonates with Gunter-Seymour, who values poetry as a form of healing. She came to the art over a decade ago after several years of journaling to process trauma. Both practices have the potential to “bring order to chaos,” she said. While journaling can stay raw, poetry goes further in the direction of refining words and images to create a piece that’s condensed and memorable — and has the potential to speak to others, according to Gunter-Seymour.

Reflecting the multiplicity of human experiences is “our duty as artists,” she said. “We’re the people who truly record history.”

As poet laureate, Gunter-Seymour is placing a special emphasis on working with teens and adults in recovery from addiction and other issues. Poetry can be a tool for building introspection and self-esteem, she said. People of all levels of experience with writing participate in her workshops, and those with little prior experience often surprise others, and themselves, with the intensity and power of their writing.

“Memories you’d forgotten and words you didn’t know — they come up,” she said. “That’s the power of free writing. It rolls the stone away from the sepulchers in our heads.”

If poetry is healing, so is the land, the home soil. Gunter-Seymour reflected on the wisdom and skill of her forebearers, who fed themselves from the earth. “They knew when to plant and when to harvest and when to rest the fields,” she said.

“What it gives us, we have to give back,” she added.

By contrast, coal mining in parts of Appalachia devastated the land and the people, Gunter-Seymour said. When “Big Coal” pulled out of some areas in the 1950s, the land was left ruined, and many people starved. Her own parents “out-migrated” for factory jobs.

In many of her poems, personal and ecological roots entwine. For example, her 2018 prizing-winning poem, “The Weeds in This Garden,” which meditates on the shaping forces of family and place, ends this way:

Who hasn’t bent with her wounds,
to a mutinous patch, scratched
at the question of what it means to be here,
taunted by a scourge of tangled roots?

Poets by their nature seem to scratch at “the question of what it means to be here.” And that makes poetry ideally suited to a time of year that balances introspection and celebration, according to Davis.

“People really like this,” he said of the Solstice reading, an event that has consistently drawn 100 or more audience members from its first year. “It’s an alternative to Black Friday and shop-until-you-drop,” he pointed out.

A longtime attendee and first-time scheduled reader, Simon agreed that poetry is essential, perhaps never more so than now — during the long haul of a pandemic. “It’s soul food,” she said.

“It’s the pith of the tree, the marrow of the bone,” she added. “It’s the essence of what’s trying to be said.”