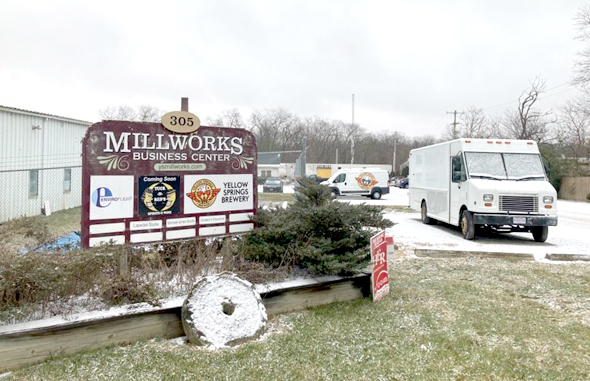 Millworks, the local industrial park, located at 305 N. Walnut Street, is once again up for sale. (Photo by Reilly Dixon)

Millworks back on the market

Millworks is for sale again.

The local industrial park, located at 305 N. Walnut Street, was listed last year after plans by its owners, Jessica Yamamoto and Antonio Molina, failed to come to fruition.

The then-couple bought the four-acre property in late 2018 and the following year had it successfully rezoned to accommodate renovation and new construction.

But those plans fell through for a variety of reasons, including a trade war and a pandemic, according to Yamamoto. In addition, the couple divorced.

“A lot of things have halted plans,” she said this week.

Yamamoto still hopes to move forward with some of her ideas. Not for sale is a one-acre parcel that fronts Yellow Springs-Fairfield Road, on which she hopes to someday build housing, and, if conditions allow, a hostel. It probably won’t happen anytime soon, however.

“A lot of things have changed since I came up with this big idea,” she reflected. “We’ll see what happens.”

For sale are three acres of the property, which contain the bulk of the park’s buildings and tenants and includes 45,686 square feet of commercial space in 10 different buildings. It’s listed with HER Commercial Realty for $1,562,000.

Current tenants include EnviroFlight, Yellow Springs Brewery, Sculptor’s Emporium and art studios of Michael Jones and Richard Lapedes. Two other tenants are in the process of opening their businesses, Tuck ‘N’ Reds Distillery and a local bakery, according to Yamamoto. (An update on Millworks’ tenants will be in next week’s News).

Yamamoto and Molina bought Millworks in December 2018 for $1,150,000 from the park’s longtime owners, local residents Rod and Ellen Hoover and Sandra Love and Sam Young. The couple moved at the same time to the village from Florida.

The project drew some criticism when it came before Planning Commission for rezoning, with neighbors and villagers raising concerns about insufficient parking, water runoff and an increase in traffic and visitors.

This week, Yamamoto detailed the factors that led to a change of plans for Millworks.

Not long after Council granted a zoning change to a Planned Unit Development in 2019, Yamamoto and Molina traveled to China with then-project architect Ted Donnell and his wife, then-Yellow Springs Chamber of Commerce Director Karen Wintrow, to attend a hotel expo. Yamamoto returned for an expo on using shipping containers for construction.

“Things were going really well. I met many manufacturers and visited several factories,” Yamamoto said. A manufacturer in central China was selected for the artist studio apartments.

But later that summer, the U.S. imposed tariffs on some Chinese imports, and Yamamoto learned that the shipping containers could cost 50% more than originally projected.

“That was a risk that wasn’t worth taking,” she said.

Then came COVID-19, which affected both the availability of materials and the viability of a hostel.

“The hostel was a good idea, but with COVID, I don’t know when people will feel comfortable staying in one,” she said.

By then, Donnell was no longer the project architect. In March, Yamamoto requested a one-year extension from Planning Commission for Millworks to submit its preliminary PUD design. The matter was delayed until June, when Council approved Planning Commission’s recommendation to not issue the extension, since the plans had changed so significantly.

Yellow Springs Brewery had by then decided not to expand its taproom and other changes were no longer part of the plan, such as the creation of “green corridors” between buildings and improvements to the property along the bike path, Village planning staff reported.

Yamamoto said that of all the challenges she faced, financing was not one of them. And she still hopes to build a hostel there, someday. In the meantime, two tenants rent space on the one acre she intends to keep, Michael Gray Earthworks and Rose & Sal Vintage Shop, whose retail location is downtown.

“I don’t anticipate financing being an obstacle,” she said. “Once you have your project together it’s easy. Yellow Springs sells itself.”

Yamamoto said the improvements they made to the Millworks buildings were mostly to its roofs and to the parking lot. Since it was listed last summer, there has been some interest, although COVID-19 created some hesitancy in the market, she said. That’s starting to change and “more seasoned” investors are making inquiries.

“As we’ve gone into 2021, more people are feeling confident buying a property of this size,” Yamamoto said. Another plus is that the site is “100% occupied,” she added.

Millworks started out as a cannery in the late 19th century and housed the DeWine-Hamma Seed Company throughout much of the 20th century. The three-acre parcel was purchased in 1991 for $225,000.