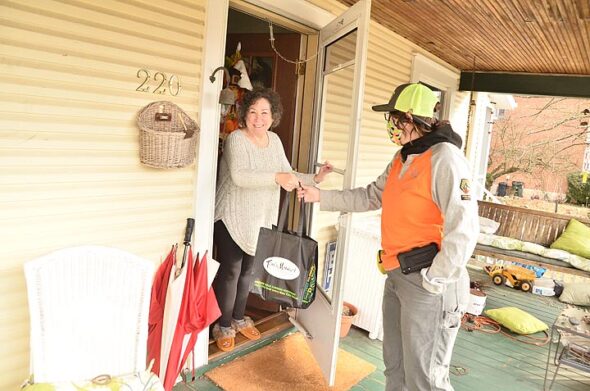 Village of Yellow Springs meter reader Rose Pelzl dropped off bags of flour and sugar to Terry Graham as part of the Village’s annual distribution of the staples to local widows and widowers. The holiday gift was originally stipulated in the will of 19th century local philanthropist Wheeling Gaunt when he donated the land that is now Gaunt Park to the Village. (Photo by Megan Bachman)

“It is not what we have but what we share.”

The words of 19th century Yellow Springs resident Wheeling Gaunt, a formerly enslaved man who bought his freedom, have inspired generations of villagers.

Gaunt’s generosity also perseveres in a 126-year-old tradition of the delivery of flour to local widows and widowers at the holidays — a stipulation in Gaunt’s will when he bequeathed the land that is now Gaunt Park to the Village.

This year’s distribution took place at the end of November. Village public works crew members purchased $3,000 of flour (and sugar, which was later added) from Tom’s Market and staked out routes across town to deliver the baking supplies. This year, 125 widows and widowers were on the list, 54 of whom had requested that their gift be passed on to the Yellow Springs Community Food Pantry.

On her route, Village meter reader Rose Pelzl delivered flour and sugar to village resident Terry Graham. Graham has received the delivery for 19 years, following the death of her husband, John Graham, a Yellow Springs school board member for whom the Mills Lawn conference room is named.

“I’m very grateful,” Graham said of the annual gift. “It makes me feel supported by the village.”

Graham passes her gift on too, by using the supplies to bake Christmas cookies with her five local grandchildren. A retired McKinney Middle School science teacher, Graham said that receiving the flour and sugar delivery prompted her to learn more about Gaunt.

“I think Gaunt has a special legacy in Yellow Springs,” she said.

A sixth-generation Yellow Springer, Pelzl is honored to help deliver the annual flour and sugar and continue a tradition that is “pretty important” for the community. Gaunt’s legacy is also evident in the local park that is used for the community pool and ball fields.

“Gaunt Park is a beautiful gem in our community,” she said.

Gaunt was born into slavery on a tobacco plantation on the Ohio River in Carrollton, Ky. He saved enough money — $900 — to buy himself out of slavery, and then purchased the freedom of his wife and another relative before moving to the village in the 1860s.

Gaunt amassed his wealth as a farmer, gardener and handyman and began buying government bonds and real estate in Yellow Springs and Xenia in 1864. 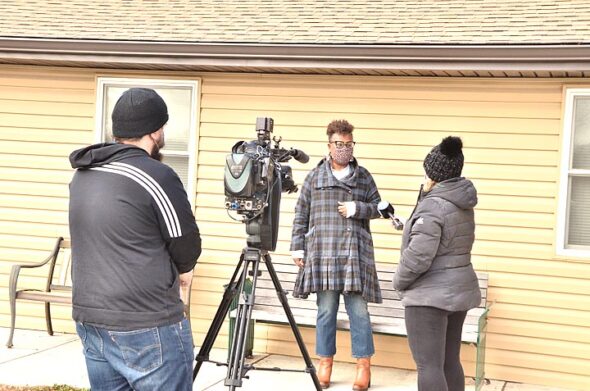 Cheryl Durgans, project coordinator of the Wheeling Gaunt Sculpture Project, spoke last month to Gabrielle Enright of News Center 7, about the group’s plans to built a life-size sculpture of Gaunt. The Dayton news channel was in town for a segment about the Gaunt flour and sugar distribution. (Photos by Megan Bachman)

A philanthropist in life and death, Gaunt bequeathed nine acres to the Village. Rent from use of the land was to pay for an annual delivery of 25 pounds of flour to “worthy” local widows, “regardless of race,” for Christmas, a tradition that the Village has continued even after the land became a park, and amended slightly. Now, widowers are also included, while the distribution has been changed to 5 lbs. each of flour and sugar.

While the legacy of Gaunt is honored each year at the holidays, if the Wheeling Gaunt Sculpture Project is successful, Gaunt’s story will be on full display for villagers and visitors 365 days per year.

Since 2017, the sculpture project group, a subcommittee of the Yellow Springs Arts Council, has been raising money and planning a life-size bronze sculpture of Gaunt to be erected in town. The group went on to commission local sculptor Brian Maughan to complete it, and chose Hilda M. Rahn Park, located at the intersection of Xenia Avenue and Dayton Street, as the location.

But in 2020, the group faced a series of setbacks. Originally set to be completed this year, the sculpture has been delayed after a fund drive slated for March was canceled because of the pandemic, and Maughan died in August.

Most of the funds, however, have already been raised — $125,000 out of $169,000 — with a new completion date set for Summer 2021. Yellow Springs Arts Council President Borchers encourages villagers to donate to see the project through.

“We need help,” he said. “It’s a way Yellow Springers can give back to a person who has been so important in our history.”

“He was an incredible man,” Borchers added of Gaunt. “He was enslaved, bought his freedom, worked very hard and became prosperous and shared it.”

“The fact that he came from such humble beginnings and continued to give back is something we want to share with the world,” Borchers said.

Sculpture project coordinator Cheryl Durgans said Gaunt’s story is significant not just for the village, but for the region. Gaunt was a businessman but also a philanthropist, who used his wealth to help others.

His legacy, Durgans said, is about “coming together, no matter what your background, race or ethnicity is, to make humanity better.”

To donate to the Wheeling Gaunt Sculpture Project, visit https://www.ysartscouncil.org.