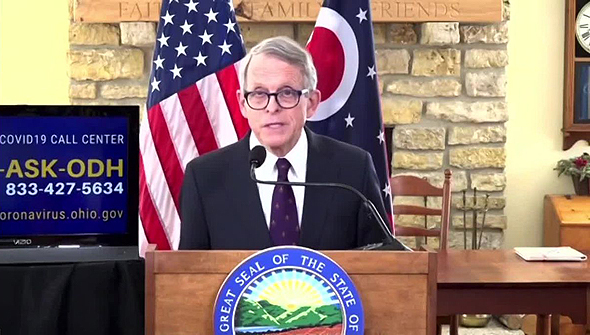 Winter weather slowed some COVID-19 vaccine deliveries to the state this week, the latest hiccup in a process that has been hampered by limited vaccine supplies, complicated scheduling portals, hesitancy to take the vaccine and other challenges.

Speaking at a press briefing from his Cedarville Township home on Tuesday, Feb. 16, Ohio Gov. Mike DeWine said he understands that some Ohioans are impatient with the pace of vaccination.

“People have a right to be impatient, but be persistent, hang in there,” DeWine said.

Because of high demand for the vaccine and supplies limited to 140,000 doses per week, DeWine said the state will continue vaccinating those in Tier 1B for at least the next few weeks. An estimated 2.2 million Ohioans are in this tier, which includes those 65 years and older, school employees, and those with congenital or developmental disorders.

DeWine said that he made that decision to save the most lives.

“We are going to give you the opportunity to get vaccines because you are the most vulnerable people in the state of Ohio,” DeWine said to residents 65 and older.

The governor has yet to release more information about who might be eligible for a vaccine next, and when. He said he has received letters from 700 different groups arguing that their constituents should be next in line. Meanwhile, President Joe Biden said this week that his goal is for anyone to be able to get a vaccine “by the end of July.”

Further complicating the situation, after a winter storm early in the week, shipments of Moderna and Pfizer vaccines to the state were delayed one to two days, DeWine said, leading some providers to cancel appointments. Others were continuing as scheduled, he noted.

Addressing another issue, DeWine also announced on Tuesday that a statewide vaccine appointment portal will be launched in a matter of weeks.

At present, those seeking a vaccine must register at their county health department or compete with thousands of others for coveted appointments at a commercial pharmacy.

“We know that is what people want — one place where they can book their appointments,” DeWine said of the portal.

DeWine added that in addition to being more convenient, the new system is “critically important as we look forward to a time when we receive more vaccines and more Ohioans are eligible,” anticipating a huge influx of demand.

Ohio was one of 40 states that declined a federal central vaccine scheduling website and chose to build their own, according to DeWine. That has taken considerable time and effort. In addition, since many Ohioans are already on waiting lists, those lists will now have to be integrated with the statewide portal, which is further delaying the launch.

“[Providers] have waiting lists and what they don’t want to do is abort that and other people can jump the line,” DeWine said.

Those lines are growing. In an update posted on its website on Wednesday, Feb. 17, Greene County Public Health reported that “vaccine is extremely limited and our waiting list is long.”

The county health department continues to call those on its waiting list in the order in which they registered for its twice weekly vaccine clinics. After an appointment is confirmed, first doses are given on Wednesdays, 10 a.m.–3 p.m., and second doses are given on Thursdays, 11:30 a.m.–5 p.m., at the Russ Research Center in Beavercreek. To sign up, visit healthalert.gcph.info/COVID19/signup.

Those seeking a vaccine can also try to schedule an appointment at a commercial pharmacy in their county. According to the county health department, vaccines are being doled out to counties based on their population, which is why people are encouraged to get vaccines in the county in which they live or work.

Acknowledging the difficulty that some older Ohioans have had in navigating those online systems, DeWine urged those who need help making an appointment to call the Ohio Department of Aging at 1-866-243-5678.

DeWine also announced that to address the issue of “vaccine hesitancy,” his office is organizing a series of virtual town halls for specific populations in the state to dispel vaccine myths. The sessions will be broadcast live at 6 p.m. and available for later viewing at coronavirus.ohio.gov/townhall. Upcoming sessions are aimed at African Americans (Feb. 22), Hispanic/Latino Americans (Feb. 23), Asian Americans and Pacific Islanders (March 1) and rural Ohioans (March 2).

One local organization that has dealt with vaccine hesitancy is Friends Care Community, where 53% of staff elected to get the vaccine when the first clinic was held Jan. 8. That figure was actually better than the national average, which saw only 37.5% of nursing home staff receive the vaccine during the first month of vaccination, according to federal data.

Since then, Friends Care Director Mike Montgomery reported in an email, the percentage improved; at the second clinic, on Jan. 29, 63% of Friends Care staff received a dose. More than 90% of residents at the nursing and assisting living facility received their vaccines, according to Montgomery.

As a whole, Ohio continues to lag behind the national average in per capita vaccination. As of Feb. 17, 1.34 million Ohioans had started vaccination, 11.46% of the population; 18,243, or 4.39%, were fully vaccinated. That’s below the U.S. figure of 12.2% who have received one dose and 4.7% who are fully vaccinated. Meanwhile, Greene County is vaccinating its population at a faster clip than the state. So far, 12.08% have received one dose and 4.55% two doses.

DeWine also defended his plan to see most Ohio students return to the classroom, at least a few days per week, by March 1. He said he stands by the plan, announced in December, because some students are struggling both socially and educationally.

“We have a number of children who are not doing very well and we worry about them,” DeWine said.

Vaccinations of Ohio school employees started on Feb. 1. Along with the rest of Greene County, Yellow Springs Schools’ teachers and staff members are scheduled to receive their first dose of the Pfizer vaccine on Friday, Feb. 19, and their second vaccine on March 12, according to YS Schools Superintendent Terri Holden this week.

According to Holden, 93% of all staff, which totals around 104 people, have elected to receive the vaccine. The local district previously committed to begin in-person learning by March 1 in exchange for vaccine access. Only one district in the state, Jefferson Township, declined the offer, while a few other districts in the state are now balking at returning after their staff received the vaccine.

Especially worrisome to DeWine are some districts where students have been out of the classroom for almost an entire year, he added. Schools were closed by the state beginning on March 17, 2020, with the closure eventually extended to the end of that school year.

Yellow Springs is in that category and today remains one of the few districts that has yet to return to in-person learning. The Dayton Daily News reported this week that 35 of 40 public school districts in the Dayton area are either fully in-person or using a hybrid model where students mix online learning with a few days per week in the classroom.

DeWine shared figures at the press conference that while at the beginning of January 47% of Ohio schools were fully remote, that figure has dropped to 15%. According to DeWine’s figures, Yellow Springs would be one of only 31 out of 609 districts in the state remaining entirely remote. However, the local district is moving forward with plans to return to a 50% hybrid model beginning on March 1.

In response to a reporter who asked why districts can’t wait until their employees are fully vaccinated, DeWine said that the vaccine does confer some immunity after the first shot, and that combined with other proven precautions, such as mask wearing, he believes it will be safe for all students and teachers to return to the classroom.

“The evidence has clearly shown that we do not have spread in the classroom, or very little spread,” he said.

According to initial clinical trials, after a single dose, the Pfizer vaccine is at least 52% effective at preventing serious illness from COVID-19, while the Moderna vaccine is 80% effective, figures which jump to 95–96% after a second dose.

DeWine added that “we know more today than we did at the beginning of the school year,” lessons that can be applied to making classrooms safer.

Yellow Springs has so far avoided any significant COVID-19 outbreaks, with only one confirmed case of a school-related exposure — involving a student — and one positive case of a staff member that may or may not have been related to a school exposure, according to the district website. There have been an additional dozen or so positive cases that were the result of non-school related exposures.

Incidences of COVID-19 in the state, county and zip code continue to fall.

Greene County is now adding as many cases per day, on average, as it did on Oct. 20, 2020. With a moving seven-day average of about 39 new cases per day, the county is down 75% from its mid-December peak, yet remains more than twice as high as it was in the summer of 2020.

Greene County remains “red” on the state heat map, averaging 411 new cases per week out of 100,000 people, a figure which has to drop to below 100 for the county to go down to orange.

Cases are declining similarly across the state. Meanwhile, in the 45387 area, just two people per week are now testing positive for COVID-19, down from 28 per week during the first week of January, which is when the area was hit hardest.

The statewide curfew was lifted entirely last week after the state saw continuous declines in hospitalizations for COVID-19. Some form of curfew has been in effect since late November 2020. The curfew may be reinstated if hospitalizations rise higher than 2,500 for seven straight days. As of Feb. 17, 1,566 hospital patients in the state were COVID-19 positive.