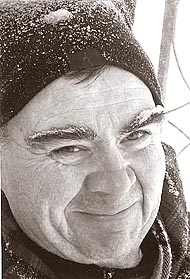 He was a kind and gentle man.

With his beloved wife, Kate, Dan enjoyed a life overflowing with love, travel, music, art and laughter. Dan and Kate made their acquaintance and life together in Yellow Springs, where they relished every opportunity to participate in and contribute to the community. Through their 31-year partnership and marriage, they each evolved into the best versions of themselves, complementing one another with joy, patience and a great deal of humor.

Dan was a dedicated brother to Drew (Maggie) Carrigan, of Cardington, and Dave Carrigan, of Springfield; their adventures together will live in infamy. He was a proud uncle to Rob (Chastity) Coleman, Laura (Brandon) Carpenter and Alan (Megan) Carrigan, as well as many great- and great-great nieces and nephews, including his Cape Breton, Nova Scotia, relatives. He was an irreplaceable stepfather to Josh Franzen, of Fairborn, and Erinn McDonnell, of Sea Cliff, NY. His grandson, Shea, who affectionately knows him as “Dee,” will miss Emporium mornings, bike rides and pummels very, very much. Dan will always hold a special place in the hearts of his mother-in-law, Joyce Kaufmann; sister-in-law, Kris (Reed) Scull; and nephews, Reed (Sarah) and Drew. Always enthusiastic and frequently irreverent, he was an honorary uncle and cycling friend to countless Yellow Springs young people over many decades.

A 1972 graduate of Greenon High School, Dan attended Ohio University, completing a Bachelor of Arts degree in photography in 1976. In his career as a professional photographer with the Huffy Corporation Design Group through 1984, Dan combined his talents as both an artist and an avid cyclist. After working for several years as a skilled carpenter, Dan obtained a master’s degree in library science from Kent State University in 1993. Many locally also knew him during this period as a part-time academic librarian at Antioch College from 1991 to 2007. Dan’s professional career culminated in his work as a science/technology research librarian, AFIT, AFRL, NASIC at Wright-Patterson Air Force Base from 1993 to 2017. In 2011, Dan achieved certification as an open source professional through National Open Source Committee, ODNI.

Dan’s greatest passion, besides his grandson, was cycling. He has been seriously riding since his 20s. The most epic of rides was a run to Canada with his two best friends, James Lichtenfels and Robb Miller, right after high school graduation in 1972. Oh, the stories from that ride, as only Dan could tell them! There were many tours and events over time. He rode TOSRV, a double-century ride, five times, beginning in his 20s, and the last at the 50th-anniversary ride, in his 60s. Dan and his grandson, Shea, who lives on Long Island in New York, rode and finished the 5 Boroughs (New York City) Bike Tour in 2019. Shea was 13. When Shea visited Ohio, they rode every day down the backcountry roads.

Not only was Dan an avid rider, he was also very active in the politics of cycling and organizations that support cycling. He was an active member of the Ohio Bicycling Federation, testifying at the Ohio state legislature in support of the three-foot passing law. The law was passed, and now motorists must leave three feet between them and a cyclist when passing — an important safety behavior. He was a member and a certified safety trainer for the League of American Cyclists. Dan was an active trainer for Cycling Savvy, an organization that promotes road riding knowledge and ability. Additionally, in earlier years, he was committed to the Bicycle Enhancement Committee of Yellow Springs. Locally, Dan rode the third- and fourth-grade bike hikes for 11 years, as well as four times with the middle school “Into the Wild” adventure. He was devoted to kids riding with knowledge and safety. He loved those rides!

As a librarian in his third work incarnation, books were super important to him. He loved to read, but also research. He was forever looking things up! His job at Wright-Patt Air Force Base was deep into scientific research, which he offset with weekend work for 15 years at Antioch College under the inimitable Joe Cali, his friend and mentor. Dan loved working with students — it was a nice contrast to his base work. His all-time favorite question from an Antioch student was, “Who were the Black hippies?” The answer is that there were none. “Read the history of the hippie movement” is what Dan would tell you to do if you wanted to know more.

And then there is the film thing. I never met anyone who knew so much about movies. Encyclopedic knowledge of all things film and film esoterica. I will miss my partner, seatmate and extensive-discussion-about-movies guy. The film festivals will not be the same now.

Dan did not know a stranger. His favorite Boston aunt dubbed him the vice mayor after a sunny afternoon stroll downtown where everybody stopped to talk or say hello! The honor stuck. Dan loved to stop and visit, have a serious conversation, a bon mot or an inquiry into how your life was going, always genuinely interested in your response. And he probably took a picture on that stop! He was always taking pictures, documenting the world around him. That camera was his third eye, and an extraordinary eye at that. There are so many amazing images in the volumes I have found. I just know you are all in there!

There will be a memorial for Dan at a later time when it is safer to gather. Information concerning memorial tributes will be forthcoming at that time. Kate and all of Dan’s family are extremely grateful for all your love and support. He will be missed — greatly and profoundly missed by  all.