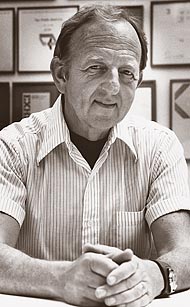 Former Yellow Springs resident Budd Steinhilber died peacefully on Jan. 25, 2021, from natural causes, in care of hospice, at his apartment in Greenbrae, Calif. He was 96.

A forward-thinking “Renaissance Man,” Budd was a multi-talented, ecology-minded industrial designer and environmental activist, who received a grant from the NEA in 1990 to show how designers were trying to cope with the environmental crisis. A member of the Industrial Design Society of America, he also designed for print, media, product packaging and electronics.

While working for the J. Lippincott Agency in New York in 1947, Budd was among a group of designers, including Read Viemeister of Yellow Springs, hired by Preston Tucker to design the innovative but financially ill-fated Tucker automobile.

Budd was born on Dec. 8, 1924, and grew up in Woodstock, N.Y. He studied at Manhattan’s High School of Music and Art, and at the early age of 15, entered Pratt Institute’s Industrial Design program in 1940. At Pratt, Budd’s legacy as a proud alumnus of the class of 1943 will continue to live on for his notable receipt of the 1993 Alumni Achievement Award, as well as for him being on their 125th anniversary roster of faculty and alumni selected for contributing iconic works to their fields.

Budd got much of his artistic training from his father, Walter, who encouraged him at an early age to draw and paint. Budd loved to paint, and much of his artwork and many watercolors are now in the collections of friends and family.

As a political cartoonist and pacifist, he created many cartoons for The Weekly People, the newspaper of the Socialist Labor Party in Brooklyn, N.Y., of which his father was a member. Ahead of his time, Budd was also a conscientious objector who did his required alternative service at the Mancos, Colo., CPS Work Camp from 1944 to 1946.

He moved to Yellow Springs in 1948, where he and Read Viemeister established Vie Design Studios in a converted chicken coop. They eventually moved into more spacious quarters on Dayton Street. Much of his design work still lives on today: the iconic putty knife logo for DAP Caulking products, the GraLab darkroom timer, and the Antioch College logo based on Leonardo da Vinci’s “Vitruvian Man.”

Budd loved jazz and theater. He not only acted in the plays, but he also designed the posters and the Elizabethan sets for the early-1950s Antioch Shakespeare Festival in Yellow Springs. He also designed and built his family’s Eames-style mid-century modern home on Grinnell Circle, where the family lived from 1955 to 1963. Ever the cost-saver, Budd’s innovative modular four-by-eight-foot grid meant he didn’t need to cut any plywood sheets.

Budd is survived by his sister, Julie (Wolfson), of Marietta, Ga., and her two sons, Bob and Jay; his daughter, Julie Steinhilber (and Tony Mazzola), of Cambridge, Mass.; sons, Donn, of Yellow Springs, and Carl (and Margaret neé Alsup), of West Linn, Ore.; stepsons, Edward A. Stewart (and Janet Montecalvo), of Novato, Calif., and Ross Stewart (and Ewanda), of Jamestown, Ohio; step-daughters, Tracy Stewart, of Sudbury, Mass., and Lisa Stewart (and Stephen Pine), of Manzanita, Ore.; and two grandchildren, Anna and Adam, of West Linn, Ore.

Preceding him in death were his brother, Norman, of Camp Verde, Ariz.; and his spouses, Joanne (Hinkle) Steinhilber, of Yellow Springs, and Virginia (Finley) Stewart, of Kona, Hawaii.

At his request, there will be no funeral service. A celebration of his life may be held later on when it is safe to do so.

One Response to “J. Budd Steinhilber”