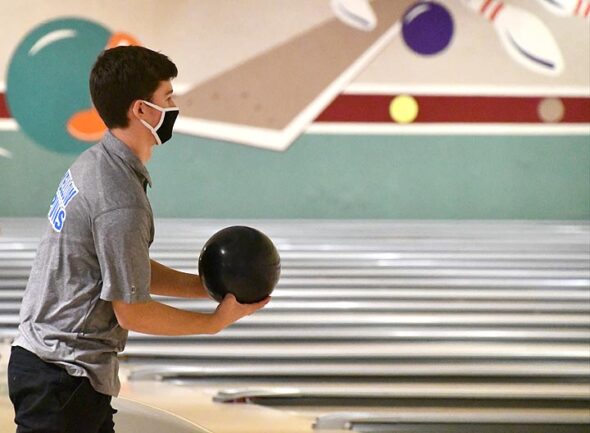 Yellow Springs High School senior Finn Bledsoe bowled a season-high 266 during a game against Dayton Christian on Friday, Jan. 22, at Beaver Vu Lanes in Beavercreek, helping his team win the conference matchup. Here, Bledsoe got ready to roll at a match earlier this month. (Photo by Michael Knemeyer)

The Yellow Springs High School varsity bowling team competed against Dayton Christian on Friday, Jan. 22, at Beaver Vu Lanes in Beavercreek. The team bowled its highest pin count of the season, knocking down 1,888 pins, while Dayton Christian finished with 1,415 pins. The win brings the team’s overall record to 5–4 and a Metro Buckeye Conference record of 3–4.

Collectively, the boys were in a zone, they were focused and having fun, according to Coach Jeff Eyrich. They came to play and it showed. Senior Finn Bledsoe led the team with a season-high 266. Individual performances:

The season is rapidly coming to a close. The Bulldogs will face Legacy Christian on Feb. 1, followed by the MBC tournament on Feb. 6 and Sectionals on Feb. 10.

On Thursday, Jan. 21, the team trounced Middletown Christian, 50–21. Aaliyah Longshaw led the Bulldogs in scoring, with 15 points. She also had six takeaways on the night. Angie Smith contributed to the win, with 11 points, 10 assists and 10 rebounds.

A few days later, on Saturday, Jan. 23, the Bulldogs gutted out an overtime win over Greenon, 54–50. YSHS started strong, taking a 21–18 lead at the half. They kept the Knights to just four points in the third quarter, extending their lead to 35–22. But Greenon came back in the fourth, overscoring the Bulldogs by double digits to tie it up by the final buzzer. Despite the momentum shift, the Bulldogs held on to the victory by winning overtime 12–7.

Boys take the week off

The YSHS boys varsity basketball team was scheduled to travel to Middletown Christian for a game on Friday, Jan. 22, but it was postponed.

On Wednesday, Jan. 20, the McKinney Middle School coed basketball matchup versus the Miami Valley Rams showcased a good team balance between offense and defense, with a resulting victory of 42–29. Kaveeyon Wagner was a key to the win, starting off strong from tipoff with excellent play in the paint, scoring 13 points on the afternoon. Alex van Ausdal had some great defensive plays and strong rebounds, putting in nine points towards the win. Landon Harris showed off his ball handling skills against the Rams and added 14 points to the total. Closing out the scoring with two three-point daggers was Lucas Price. The Bulldogs have been working hard and have seen some solid team support from Ephram Naeve and Payton Horton. The team has two weeks left in the regular season before tournament play begins.