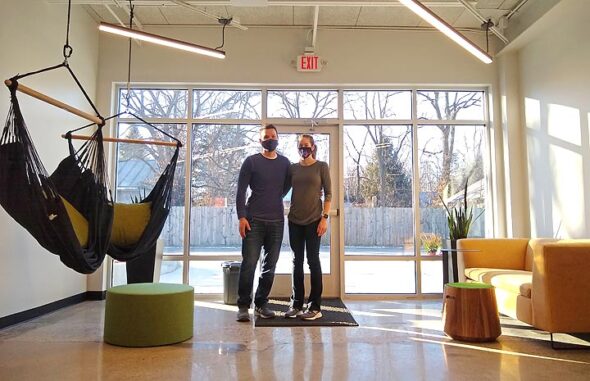 Owners Mark and Lesley Obstalecki in the atrium of the newly opened Coactive Yellow Springs, which offers office and collaborative space for small businesses looking to grow. (Photo by Lauren “Chuck” Shows)

Yellow Springers have been talking about a business incubator for years. The former Creative Memories complex at 888 Dayton St. and the Center for Business and Education had been  discussed as potential incubator locations before the current businesses moved in. Antioch College — whose Sontag-Fels Building housed a successful incubator enterprise in the 1980s — has also been suggested within the last decade.

The small industrial building on South High Street, however, was never part of those conversations. Nevertheless, that building — formerly the home of Ertel Publishing — opened last month as Coactive Yellow Springs, a collaborative working space and the first small business incubator of its kind in the village.

Coactive Yellow Springs is the brainchild of village transplant Mark Obstalecki. The Illinois native and engineer moved to Yellow Springs with his wife, Lesley, who works as a personal trainer, in 2018. The couple came to the village by way of Ithaca in Lesley’s native central New York,  where they met while attending Cornell University.

“We were sort of drawn to Yellow Springs because it has a similar vibe to Ithaca,” Mark Obstalecki said.

Outside of his engineering work, which brought him to the Miami Valley, Obstalecki said he’s always had an entrepreneurial spirit. While still in graduate school, he started his own small business, Numismatically Yours, which buys, sells and trades coins and precious metals. After the success of that business, Obstalecki said that he felt emboldened to expand his business acumen toward what he considers to be a greater purpose.

“You can buy and sell a coin and make somebody happy, but ultimately, you don’t really add a lot of value to the product,” he said. “I wanted to develop a business that actually helps people by providing a place for small businesses to transition from homes into a professional space.” 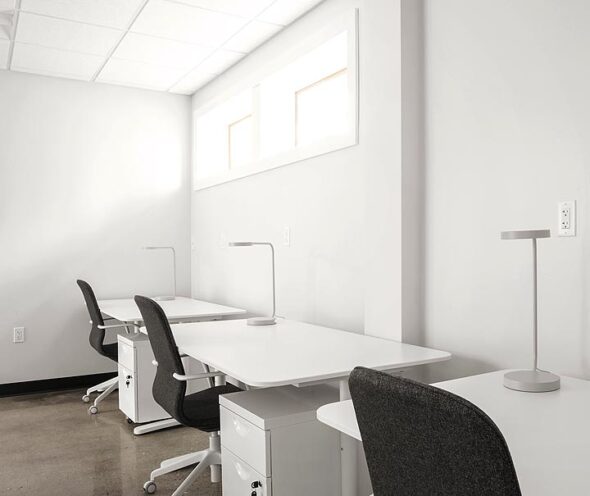 The Obstaleckis bought the building on South High Street in April of 2019 for $400,000; the month prior to the sale, Ertel Publishing moved its operation to Xenia after 32 years in Yellow Springs. Initially, Mark Obstalecki said he had planned to rent out the new property to a single entity for a few years until the couple settled into the community and felt ready to develop the space. However, the space sat dormant, except for the portion that had been rented by The Morgan Family Foundation prior to the building’s sale, throughout much of 2019.

“I wasn’t super aggressive about putting ads out for the space and really didn’t have any inquiries for a while,” he said. “So then I decided just to bite the bullet and explore the idea of what it would take to transform [the building] into this new space.”

Mark Obstalecki met with architects and contractors that year to get an idea of what things would look like if they embarked on the venture, and the vision that came together was, he said, “really appealing” — so they decided to jump in with both feet.

Then, just as the renovation of the space was slated to begin, COVID-19 broke out on American soil. This brought the project to a “scary decision point” — should they move forward with construction of a space designed around collaboration when, for the foreseeable future, people would be isolating themselves?

Obstalecki said he decided to go ahead with the renovation, reasoning that part of the investment was looking toward needs that would arise in the next few years. Noting the shifts in the American workforce as people lost jobs due to the pandemic, he theorized that more folks would likely be looking to “invest in themselves” and start small businesses or become self-employed. Plus, Obstalecki himself was working from home and “itching” to relocate his own working environment to an office setting.

“So all of that helped justify — in my mind, at least — that I should move forward, despite the risks,” he said.

Thus, on a cold Saturday morning last month, Mark and Lesley Obstalecki offered the News a tour of the newly opened Coactive Yellow Springs. The couple were there with villager Lindsey Engler, who designed the interior of the space. The three were in Coactive’s sunny, open “atrium,” as they call it, which features small tables and chairs, a sofa and two swing chairs. To one side is a kitchen area, with an island and counter and a refrigerator stocked with drinks, which the Obstaleckis said they’ll offer for $1 to their tenants, with the funds from sales to benefit YS Schools. 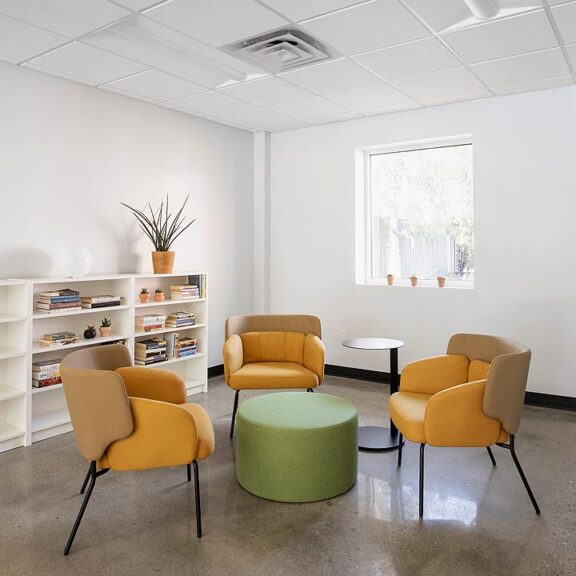 “Mark’s whole vision started off with that refrigerator and the polished concrete floor,” Engler said, indicating the high-shine floor that had been covered with vinyl and carpet before the renovation. Through their gloss, the concrete floors still display nicks and faint oil stains — signs of their previous industrial use that Mark Obstalecki called “industrial chic.”

At the rear corner of the atrium is the building’s conference room. Next to that is a smaller room with plush chairs arranged in a circle, which the Obstaleckis call the “huddle room.” These two rooms, along with the atrium, make up Coactive’s collaborative space, which tenants will be able to reserve for meetings, retreats or small events as part of their tenancy, and where they’ll be able to interact and network with other tenants; Mark Obstalecki noted that these spaces will be available for rent for outside businesses as well, but that tenants will always have priority for their use. Down the hall are the building’s eight office spaces, of varying sizes, including a shared space where those who don’t need a full office can rent individual desks.

The Obstaleckis have put a lot of sweat equity into the building, doing much of the painting and trim work themselves. Over the last several months, Lesley Obstalecki said, they’ve hardly been anywhere else.

“We just started taking some time off in the last few weeks  — before that, the only day off we had was Christmas,” she said.

Though their construction work is mostly done, Mark Obstalecki still expects to spend a lot of time in the building; for one thing, he’s rented one of the offices to himself, as the new home of Numismatically Yours. He’s also showing the space to potential renters, having already led more than a dozen visitors around the space; one office was snapped up by a new tenant within a week. He said there’s been a good amount of interest from folks in the wellness community, but that the space isn’t really ideal for those businesses — at least not yet.

“The space is geared toward individuals that focus their workday around a computer — nonprofits or small firms, or individuals like mental health professionals, accountants, attorneys,” he said. “But I think there is definitely an opportunity to develop space for those [wellness] enterprises in the future as well.”

And the Obstaleckis are already conceiving of ways to expand in the future; the Morgan Family Foundation rents about 1,700 of the building’s approximately 7,400 square feet of space, and the newly renovated portion occupies about 4,600, leaving another 1,100 or so to work with. Mark Obstalecki said he envisions moving the conference room to that undeveloped space and adding more offices.

“And there’s potentially even a future where the entire building becomes collaborative space,” he added.

Obstalecki said his final vision for the space is as a mentoring hub for young entrepreneurs — something he hopes to do himself through his own small business.

“I’m planning to find local students and young people to work with me at Numismatically Yours and mentor them at the same time — teach them some basic technical skills that they can carry as they move to college and into their careers and beyond,” he said. “That’s really the grand scheme.”

For more information, contact Mark and Lesley Obstalecki at 937-319-1150 or send them a private message on Facebook.