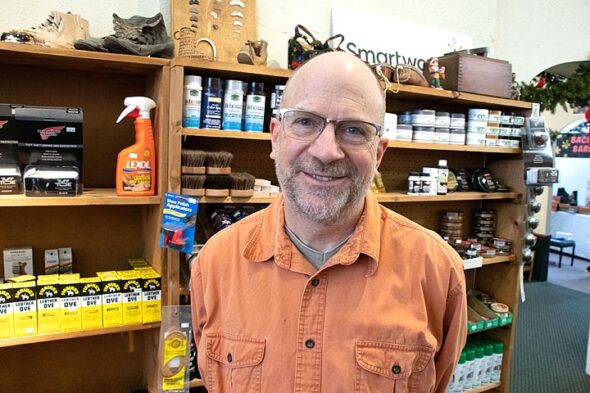 Sontag to retire from Xenia Shoe & Leather Repair after 38 years

Over the last few months, Tim Sontag has been doing his best to settle into a well-earned retirement. After 38 years of running Xenia Shoe & Leather Repair — a shop he founded — the longtime village resident has officially called it a career.

“It’s a little bittersweet. I definitely miss some things about it,” he recently told the News.

The store sells a wide variety of shoes — from tennis shoes to dress shoes — and also offers specialized fitting and advanced leather repair. A professional pedorthist, Sontag became known for helping people get a shoe that would fit them just right, as well as fixing up any leather products.

Sontag’s last day at the store was Dec. 31,  and a few months into his retirement, he is still adjusting.

But in that time, Sontag has had some time to reflect on what his work meant to him. Specifically, he was glad to fix products that were important to people.

“It felt good to keep people’s favorite things going, or helping someone with special needs — someone who was hard to fit — and getting them what they need,” he said.

“It felt good, just providing good personal service to the community,” he added.

With the store’s founder having taken leave, Xenia Shoe & Leather Repair is now helmed by longtime employee Matt Jopson, who Sontag said is “a great guy, and he’ll do a really great job.”

When asked about how he got into leatherworking and shoe repair, Sontag said that it started with a few small projects that blossomed into a trade.

“I’d done some leather working, I’d made some moccasins,” he recalled, “and I had this sort of romantic notion: I wanted to make shoes.”

With his mind set on this notion, a young Sontag went off to Akron where he worked under a shoe repairman, and after spending several months learning the ropes, ended up actually buying the store. But after a few months up there, he felt the pull of Yellow Springs, and he knew it was time to bring his trade back to his home.

“I learned there, I made some beginner’s mistakes, and I gained some confidence,” but ultimately, he said, “I knew I wanted to live in the Yellow Springs area.”

Sontag was born in St. Louis, Missouri, and first came to Yellow Springs to attend Antioch College in 1975.

There he met plenty of new friends, including his future wife, Lynn. And getting a taste of life in Yellow Springs, the couple decided that they wanted to stick around the area.

After his apprenticeship, Sontag came back to Greene County and began looking for a place to set up shop with his newly developed skills.

“I looked in Springfield, and Beavercreek, and Xenia, Kettering, and Huber Heights, and some places either had shops, or were just too far,” he said.

“I chose Xenia because I just really liked the look and feel of the town,” he said.

In an interview with Yellow Springs Chamber of Commerce Board President Gery Deer in December, he recalled, finding “a lovely little spot downtown, right across from the courthouse.” He moved in June 1982 and Xenia Shoe & Leather Repair has been a staple of downtown Xenia ever since.

In the interview with Deer, Sontag recalled spending his first winter in his newly founded shop “huddled over a kerosene heater because I was so worried about how much the heating was going to cost me.” But once he had time to put down his roots, the store blossomed into a unique facet of life in and around Xenia.

In opening up a shoe repair business in the early 1980s, Sontag was bucking a trend. According to the Shoe Service Institute of America, there were around 60,000 shoe repair stores across the country in the 1940s, but that number has been whittled down to under 7,000 stores nationwide today. Ensuring the success of his store took some patience and plenty of flexibility.

“It’s hard to make a living just doing traditional shoe repair, so we started fixing lots of other things, like luggage and leather jackets, or really anything that required heavy sewing,” he said.

In remembering some of the more unique things he’s seen come through the door, Sontag recalls tents, trampolines, scuba outfits and even circus gear.

In addition to expanding the shop’s repair repertoire, Sontag also guided Xenia Shoe & Leather into retail. When another shoe store in Xenia had to shut down, Sontag was able to pick up their Red Wing work boot account. As the store transformed their product approach, Sontag used it as an opportunity to fix up the store itself a bit as well, telling Deer that it was “good motivation and a good business move as well.”

But Sontag, being a small business owner, knows that it might all have been for nothing if not for the support of the community around him.

“The community really supported me, Xenia, Greene County, I know we had a lot of Yellow Springs customers,” he said. “A lot of people make a conscious decision to support local business, and it makes a difference.”

As for his next steps, Sontag says he’s looking forward to spending time with his adult sons, Andy and Nicky, who went to Yellow Springs schools, his grandchild and other family members who have settled down in different parts of the globe.

For the hardworking small businessman, it’s been an adjustment.

“I’m giving myself time to get used to it.”

*The writer is a freelance writer for the News based in Springfield. He can be contacted at miesse99@gmail.com.