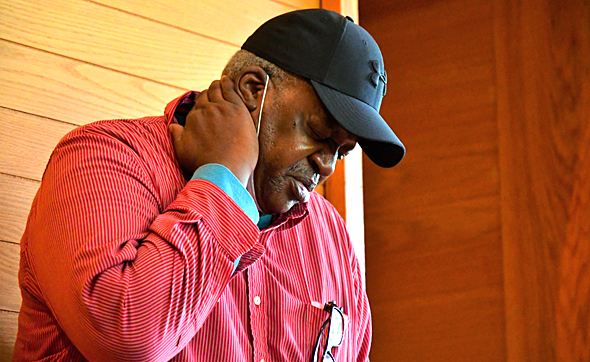 For “What’s Done in the Dark,” a new stage play by villager Bomani Moyenda, curtains go up this weekend in the auditorium of Central State University’s Paul Robeson Cultural and Performing Arts Center. (Photo by Kathleen Galarza)

“In order to create the universal, you must pay very great attention to the specific.”

That’s what playwright Lorraine Hansberry, speaking about her then-new play “A Raisin in the Sun,” told radio reporter Studs Terkel in 1958. It’s a thematic element shared by local playwright Bomani Moyenda’s new play “What’s Done in the Dark,” which will be performed Friday and Saturday, April 2 and 3, at Central State University’s Paul Robeson Cultural and Performing Arts Center.

The play begins with a story that’s all too familiar: a fictional young Black man named Anthony Neville is carrying a toy gun down the street, intending to deliver it as a gift to a nephew. A white woman spots Neville and calls the police. The police respond with violence.

Though the details that lead to the fictional Neville’s killing are reminiscent of a slew of real-life events in American history, Moyenda said the play aims to examine both the universal and the specific as it imagines the conversations people have around the case, the behind-closed-doors machinations of the criminal justice system and how all of it is perceived by the spirit of the man who was killed.

“I really started thinking, ‘What would the victims have to say if they had a voice?” Moyenda said. “Ultimately, it’s a way to experience their humanity.”

Moyenda said the original version of “What’s Done in the Dark” was written last year with the annual YS Theater Company 10-Minute Play Festival in mind. Unable to work out casting and directing before last year’s festival, Moyenda decided instead to send the script to John Fleming — who is directing “What’s Done in the Dark” — to get his take on it. Fleming, a performing arts instructor at Central State and longtime director of YS Kids Playhouse, said he encouraged Moyenda to expand the work into a full-length play, and the two corresponded often during the pandemic as Moyenda continued to write. 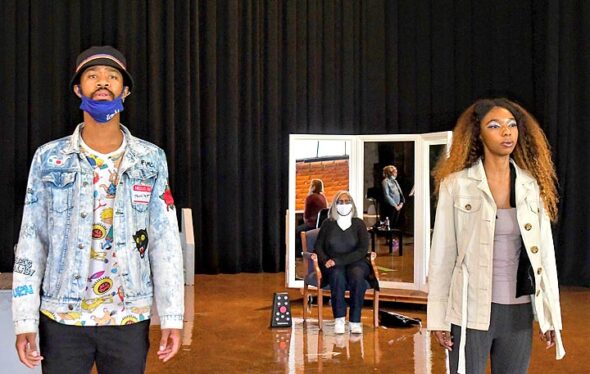 Pictured at left and right are actors Oscar Thomas and Avesha Clarke, who play “Unexpected Visitors from Another Dimension.” In center is the Cheryl Smith, who plays “The Lady In Black.” (Photo by Kathleen Galarza)

“We had an ongoing exchange of drafts — maybe eight or nine drafts — all during the pandemic,” Fleming said.

A poet, columnist and blogger, Moyenda is making his first foray into playwriting with “What’s Done in the Dark.” As such, he said, he sometimes called on Fleming’s theater knowledge when it came to things like structure during the drafting process.

“Once I get an idea I can just run with it, so I would write something, and then John would say, ‘Well, why don’t you bring these characters back again?’ or ‘These kinds of things come in threes,’ and so I’d sit down and write two more scenes,” Moyenda said.

“It was a great collaboration,” Fleming added.

Though Moyenda had written the play with certain archetypes in mind, Fleming said the casting of the play was somewhat nontraditional.

“I cast the show for reasons other than age or race — so the play’s villain, if you will, is an older white man, played by a young, African American man,” Fleming said. “And then we have several women in roles that were originally written for men.”

Fleming has staged the play so that the majority of the play’s 14 actors are on stage for nearly the full length of the show. Though the cast rehearses in masks, they will be maskless for performances, and are thus spaced out across the large stage in order to maintain physical distance.

This space on stage makes it easier for villager and filmmaker Elias Kelley, who serves as video production manager, and his cinematography crew to move between the actors on stage. Kelley explained that the play will be performed simultaneously to both a small, in-person audience and to online viewers, and that he and his crew will be filming both wide and close-up shots based on Fleming’s direction during the performance.

“So instead of the traditional livestream, we’re going to be able to do something more like ‘The Dick Van Dyke Show,’” Kelley said.

Fleming added: “For those watching in the auditorium, it will be like they’re watching the filming of a TV show.”

Kelley said the process of integrating both the live and virtual, along with sound and visual effects, has been a challenge for the production crew — but a welcome one.

“What we’re doing on the municipal level is what a lot of Hollywood studios used to do and are looking to do now — effects that can be performed live either in a soundstage or on a live stage,” he said.

Tailoring a performance to both a live and livestreamed audience has also been hard work for the cast, said actor Avesha Clarke.

“It’s important to have those subtle gestures for the camera to pick up, as well as being expressive enough for the audience to see,” she said.

Whether watching in person or online, Fleming said those watching should expect the play and its subject matter to be “intense.” Though no violence is portrayed on stage, it is implied and referred to throughout the play.

“It could be a triggering play for some people, especially [people of color] who have been stopped or pulled over by the police,” Fleming said. 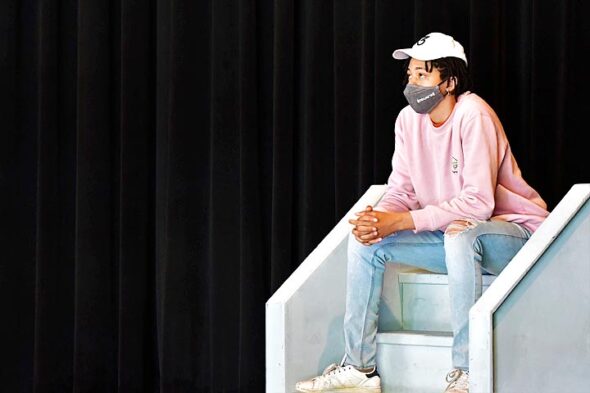 Malcolm Blunt from a recent rehearsal. (Photo by Kathleen Galarza)

Though the play includes a number of fictional characters, it also includes what Moyenda — in order to preserve the mystery for audiences — described as “unexpected visitors from another dimension.” Central State student Avesha Clarke plays one of these visitors — a character audiences will surely recognize — in one of the play’s more gut-wrenching scenes.

“It’s been hard sometimes, but it’s not something I want to hold back on — even though this is a play, we should address everything in it as real,” Clarke said. “My character is hurt, and I want to project so that the audience receives that.”

Clarke’s view on her character seems to line up with Moyenda’s intentions as a playwright. He hopes the audience will accept the characters as human first, noting that Black people who are killed by police are often dehumanized by the media and by the criminal justice system after their deaths.

“They find something out of [the victim’s] past — drug use, a crime they committed — and they use that to try to justify them being killed,” Moyenda said. “But as my fictional Anthony Neville character says: ‘Even if I did have marijuana in my system, is that a reason to put all those bullets in me?’”

Kelley echoed Moyenda and Clarke, saying he hoped that people would recognize the importance of the play’s message, but added that working with a cast and crew that’s diverse in terms of race, gender and age is just as important.

“There is a championing of diversity on this stage that’s bringing the play to fruition,” Kelley said. “If we were to take everything that’s happening on stage right now and project that out into the world, we’d have what we’re looking for.”

“What’s Done in the Dark” will be performed on Friday and Saturday, April 2 and 3, beginning at 7:30 p.m. each night in the Paul Robeson Cultural and Performing Arts Center at Central State University. In-person audiences will be limited to 150 each night; audiences will be required to wear masks, maintain physical distance and have their temperature screened before entering the auditorium. Admission to the in-person show is by donation; the play may be streamed for free.