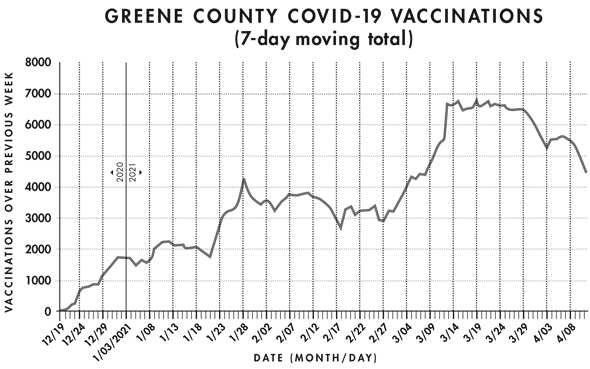 As of two weeks ago, 36% of the county’s population have received at least one dose of the COVID-19 vaccine. But as shown above, vaccinations per day is down from its mid-March peak. Each data point in the graph shows the total from the previous seven days. (Data: Ohio Department of Health)

Thirteen months into the coronavirus pandemic, a weary public is wondering what’s next.

Is another wave of COVID-19 coming? Can the vaccination campaign keep it at bay? Where is the illness now spreading? When will herd immunity be reached?

Recently, there have been both positive and troubling developments.

Most significantly, on Tuesday, April 13, Ohio officials heeded the recommendation of the CDC and the FDA and halted use of the Johnson & Johnson vaccine in the state, after six nationally reported cases of severe blood clots, including one death, were linked to the vaccine.

Ohio Gov. Mike DeWine addressed the issue at a briefing April 13. He said that after a call with the White House earlier in the day, he learned the recommendation was to help health providers treat any issues that arise from the shot.

“We were told the pause was to help the health community recognize any adverse events related to the Johnson & Johnson vaccine, to report those events, and to manage those events,” DeWine said.

DeWine added that he learned from the federal briefing that what’s being called a “pause” is likely to last “days to weeks, not weeks to months.”

The reactions occurred in women ages 18 to 48 between six and 13 days after receiving the vaccine. A total of 6.8 million people in the country, including 264,311 Ohioans, have received the Johnson & Johnson vaccine.

Those who have recently received a Johnson & Johnson dose are urged to contact their health provider if they develop a severe headache, abdominal pain, leg pain, or shortness of breath within three weeks of vaccination. Other symptoms to look out for, according to a medical professional at the DeWine briefing, are vision changes, consistent nausea and vomiting and swelling of the lower extremities.

While the severe reactions from the Johnson & Johnson vaccine were “extremely rare,” according to the Ohio Department of Health’s medical director, for some, it confirms fears over vaccine safety, with the potential to increase what’s been termed “vaccine hesitancy.”

Vaccination rates are already down in the county and state after reaching record highs in mid-March. There is now more vaccine supply in the state than demand, and appointments are going unfilled.

In addition to vaccination issues, the state is seeing new, more contagious variants of the virus starting to spread in Ohio. Elsewhere, including in nearby Michigan, they have spurred another wave of illness.

But there is good news too. New cases of COVID-19 are plateauing again in the county and state after a recent rebound. New hospitalizations and deaths are also flat. Meanwhile, all Ohioans age 16 and older are eligible for a vaccine, and more than 35% of state and county residents have received at least one dose.

Asked this week about the prospects for a fourth wave, Greene County Public Health epidemiologist Dr. Don Brannen said he understands that many people are “getting tired,” but everyone should continue to follow precautions such as mask wearing and social distancing, and get a vaccine if they haven’t already done so.

“If we can just stay the course for another month, hopefully by June we’ll be out of this,” he said.

“The more people who get the vaccine, the better,” Brannen added.

This week, the News looks closer at various trends in the county and state.

In mid-March, Greene County nearly dropped to “orange” on the state heat map, for the first time since October 2020. The county recorded just 100.6 new cases of COVID-19 per 100,000 residents for the two weeks ending March 18. It needs to fall below 100 to be downgraded.

Instead, the county saw rising case loads for three straight weeks. For the week ending April 8, Greene County’s new case incidence rate was 236 per day per 100,000, up from 163 the week prior, and above the state average. Greene County had the eighth-fastest rate of spread in the state during that time.

Dr. Brannen said he attributes the recent uptick to a “post-spring break increase.” For instance, contact tracers recently followed the movements of an area woman who brought the virus back from Florida.

“We are seeing some people traveling out of the area and coming back in, having been exposed out of the state,” he said.

Cases in the 45387 Zip code have been falling since late February, and reached zero new cases for the week ending Monday, April 5. But since then, five new cases have been added here. Whether it’s a growing trend or not remains to be seen.

Meanwhile, in the county, new cases dropped slightly over the last week, to about 32 per day, from 35 per day the week prior.

And statewide, cases also appear to be plateauing this week. For the week ending April 8, the state had an incidence rate of 183.7 new cases per 100,000 over the previous two weeks, up from 167.1 the week prior. Since April 8, however, new daily cases have been staying flat.

Another trend flagged on the Ohio Public Advisory System are new cases in congregate settings in the county. The proportion of congregate cases in the county rose for the first time in months, to one-third of cases, according to the latest update.

The problem is not county long-term care facilities, which recorded only four new cases over the prior week, among three staff members and one resident, according to state figures. High vaccination rates there, especially among residents, have drastically curbed COVID-19 cases in those settings.

Antioch College, which started its Spring Quarter on Monday, also is reporting no new cases. According to college spokesperson Christine Reedy this week, all students were tested when they returned from spring break this week, and will be mostly attending classes remotely until a second test of all students at week’s end.

The congregate case figure will likely get more pronounced in future weeks. Brannen said the reason is that some county residents were exposed at out-of-county long-term care facilities, such as Bethany Village in Centerville. Over the weekend, 30 of those cases were recorded from past outbreaks at such facilities, he said.

Other drivers of county cases

Asked if the county was seeing much COVID-19 spread in primary and secondary schools, Brannen said they were “not seeing that so much.” Instead, the current cases are among working-age adults, especially since most older adults are vaccinated.

“We had students who were associated with sports causing some issues in the fall and around December as well, but right now, it seems to be the working adults,” Brannen said. “That’s probably an artifact of the vaccination program focused on the older people.”

Brannen added that even when there are school cases, youth have done a better job of staying isolated due to an effective partnership between school districts and the county health department. By contrast, working adults are the main “spreaders” at present, Brannen said.

Driving some cases may be increased risky behaviors, such as flouting mask rules, Brannen added. He said the health department sees this type of behavior “everyday,” and it may lead to outbreaks among those who are hesitant to be vaccinated.

“They’re also the ones who are not getting the vaccine, so they may be inadvertently spreading it,” he said.

Another concern is the increasing prevalence of more contagious strains of the virus. Brannen said the county has had “sporadic reports of two variants” of concern, the P1 variant (Brazil) and the B.1.1.7 (U.K.) variant. He said it gives more urgency to the campaign to vaccinate as many residents as possible.

“That is one indication that people should get the vaccine as early as they can — to prevent those variants from emerging — because [the variants] are susceptible to the vaccine right now,” Brannen said.

DeWine has made similar pleas in regard to the statewide spread of the variants, which he said at a briefing last week are doubling about every nine to 10 days.

“Ohio remains in a very important race against the virus and its variants,” he said.

Vaccination rates may also have peaked in Ohio.

Last week, fewer vaccines were given in Ohio than in the previous two weeks. In Greene County, the peak of vaccination occurred in mid-March, when around 6,700 residents were being vaccinated per week.

Whether the issues with the Johnson & Johnson vaccine affect vaccination rates going forward remains to be seen.

Ohio Department of Health Medical Director Dr. Bruce Vanderhoff said he believes that the recent pause in the Johnson & Johnson vaccine should actually inspire confidence in the process.

“The bottom line is that these cases appear to be extremely rare and the fact that the CDC and the FDA have raised concerns and pushed the pause button on these six cases should give Ohioans great confidence,” he said.

Interviewed before the announcement about the Johnson & Johnson vaccines, Brannen said he believes that contraindications to receiving a vaccine are “few and far between” and that the chance of side effects still pales in comparison to a natural infection.

“The vaccine is still much better than getting the actual illness,” Brannen said.

With vaccination rates on the decline, public health officials need to try new tactics to increase vaccinations. DeWine has announced several initiatives in that vein, bringing clinics to college campuses and workplaces.

“There is a lot less demand now, so we’re going to have to get a lot more inventive to get the word out and get the vaccine to those where they are able and willing to get it,” Brannen said.

DeWine said at the briefing that Ohio’s allotment of Johnson & Johnson vaccines have largely been used at mass vaccination clinics and to vaccinate college students before the end of the spring semester, while a smaller amount went directly to pharmacies.

In the meantime, some providers are switching to Pfizer and Moderna vaccines. DeWine added that even without the availability of the Johnson & Johnson shot, there are plenty of appointments for the other two types, pointing to a recent “slackening of the demand” for the vaccine.

Drawing on his experience with other infectious diseases, Brannen believes that the first two years of the COVID-19 pandemic will be the worst, and that the situation will improve thereafter.

Specifically, he points to the country’s experience with mosquito-borne West Nile Virus, which reached sufficient seroprevalence to create herd immunity in its third year. That took place when about half of the population had antibodies to the virus, Brannen said.

With the novel coronavirus, the goal is to get to seroprevalence of more than 80%, he added.

Brannen believes that outbreaks of COVID-19 will eventually be more geographically limited, similar to other diseases that have been controlled via mass vaccination, such as chickenpox and the measles.

“We will probably see flurries of brushfire outbreaks among the clusters of people who are vaccine refusers,” he said.

As for those who doubt the severity of the disease, Brannen believes that the higher death rates among older people may have shielded its grave impact. So far 18,917 Ohioans, and 233 county residents, have died, and 93% of state deaths have been among those 60 and older.

But those who refuse to take precautions could still spread the disease to those who are more vulnerable, Brannen noted.

“If people have any doubt about the deadliness of the virus because they only see people get sick and recover, it’s because the people who are really sick are elsewhere,” he said. “It does have a propensity to affect the elderly.”