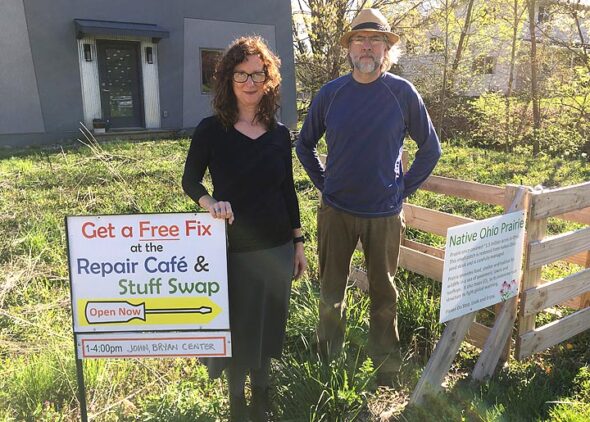 Kat Walter and Duard Headley pose before their Fairfield Pike home that features a prairie that minimizes CO2 emissions from not mowing; does not use fertilizers or herbicides; sequesters carbon; and increases groundwater retention. Walter and Headley are also organizers of the occasional Yellow Springs Repair Café. (Submitted photo by Marianne MacQueen)

As Faith Morgan told me in a recent interview, it is difficult to wrap our heads around the magnitude of the problems we have created through our reliance on fossil fuels. We are embedded in an extractive economic system, living lifestyles that are destroying life on the planet, she explained.

Recognizing the environmental crisis, Village Council, of which I am the vice president, approved a 2021 goal to create a Climate Action and Sustainability Plan. The Environmental Commission is currently reviewing a draft plan that builds on earlier work of the Yellow Springs Resilient Network, as well as that of former commission member Duard Headley.

In honor of Earth Day, April 22, I interviewed several villagers to learn more about what they are doing to care for the Earth and what their motivations are.

Everyone I talked with was passionate about what they were doing. There were other common threads as well. Several mentioned community as both a benefit of — and an important reason for — making change.

As composting expert Matthew Lawson said, “We can have a big impact as individuals and as a community.” Kat Walter noted that when people come to the Repair Café, “they bring their things and their stories.”

Morgan talked of the Cubans she met who, when faced with the loss of industrial agriculture, turned to each other for support as they relearned how to garden. When we are moved to make changes toward more sustainable practices, Morgan added, we create examples for others, and for the future. 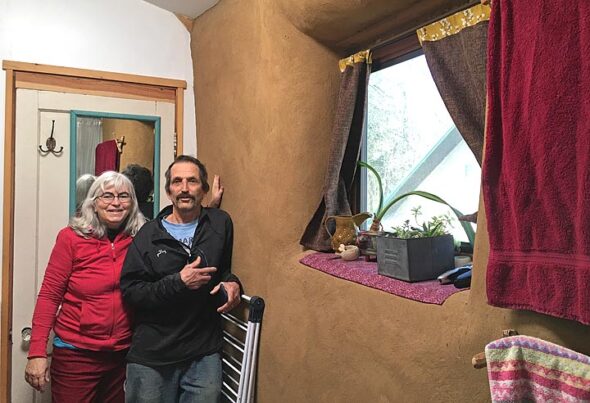 Andy & Beth Holyoke: “I wanted to feel good about the work that I did.”

Andy and Beth Holyoke recently moved into a straw bale home they built that they call their Tall Small House. It is the 15th straw bale building Andy Holyoke has constructed and is located above his shop on Railroad Street. At 550 square feet, it is one quarter the size of their previous home on the same property. He chose straw bale because he wanted a construction method that was energy efficient and used sustainable materials. He was able to purchase all the bales from within 15 miles of Yellow Springs. The bales offer high insulation value and the construction method provides jobs for unskilled helpers to install the bales. The Holyokes created urban infill by creating four housing units on the space where there had been one. They divided their property into three lots and built a straw bale home on each of the two new lots and rehabbed the existing older home, which they now rent to a family. The homes are close to downtown, which makes for easy walking and biking. 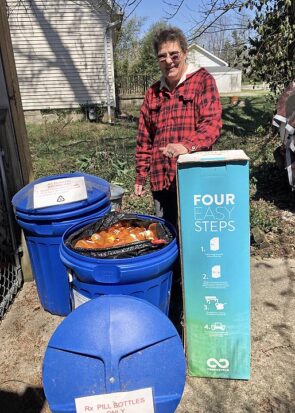 Vickie Hennessy:“People feel good when they are contributing to solving a problem.”

As a naturalist and an environmental activist, Vickie Hennessy has a deep concern about the pollution caused by plastics. Plastics aren’t biodegradable but they do break down into small particles now being found in the bodies of animals, including humans. Plastics result in untold deaths for marine species. Hennessy decided to start a recycling project she could do by herself. She placed bins at the Bryan Center, YS Library and the Wellness Center for people to drop off #5 plastics. She collected the plastic and once a month she drove her pickup to Whole Foods, which had a contract with a New York company. In one year she collected 1,200 pounds of plastic. She stopped when Whole Foods stopped taking plastic after the pandemic hit, but notes that this year Rumpke has started accepting #5 plastics. 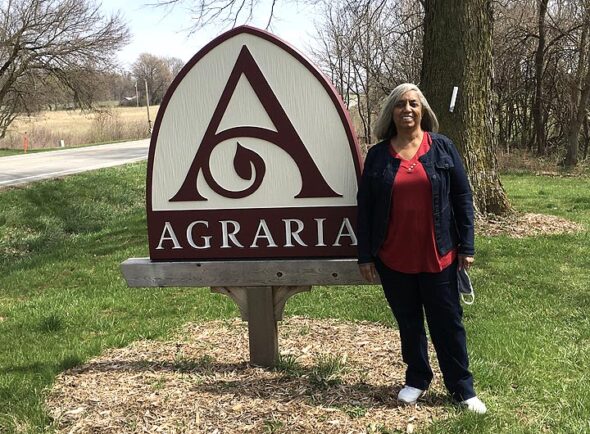 Cheryl Smith: “Food should be a right.”

Cheryl Smith grew up in West Dayton during the 1950s and ’60s when it was a vibrant African American community. People had gardens, there were thriving Black businesses, grocery stores and farmers markets. Recently, she was dismayed to discover while working with Black Lives Matter Miami Valley that food insecurity was identified as a deficiency in her former West Dayton neighborhood. While attending a food summit at Sinclair College, she met Susan Jennings from Community Solutions/Agraria. That meeting led to her becoming involved with Agraria to work on issues facing Black farmers. Smith helped organize Agraria’s first Southwest Ohio Black Farming conference, “Beyond Forty Acres and a Mule” last year. She is now on the board of Community Solutions and is working on a second conference, “Community, Land and Food Sovereignty,” slated for mid-September this year.

“When people start composting they become more aware of the need for environmental and economic sustainability.”

Matthew Lawson grew up in Ontario, Canada, where recycling and compost collection was just part of the solid waste collection service. While living in Central America, he started two composting projects to help people compost on their own land and communally. In 2017 he moved to Yellow Springs and started Trillium Organic Services. He makes a small profit, but his primary impetus is to provide people with a way to compost organic food waste. He notes that 37% of the garbage collected in the United States is organic matter that ends up in the landfills and creates methane — a greenhouse gas 27 times more potent than C02. Lawson points to San Francisco as a model for the United States. It was able to reduce its landfill waste by 60% over 25 years by contracting with an employee-owned composting company. 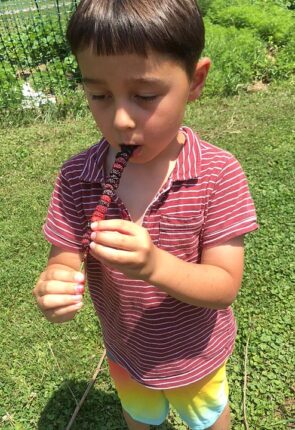 When Mao Ju was a young child growing up in the countryside, everyone raised their own food. In 2018, she moved to Yellow Springs, read books and got help from local gardeners so she could once again grow her own food. She now has garden plots on Bill Duncan Park, the Glass Farm, Corry Street and Dan Dixon’s farm. As a vegetarian, she grows about 80% of her own food from April through October. She grows tomatoes, cucumbers, green beans, stinging nettles (“they grow themselves”), winter, summer and Asian squash, ginger, onions, garlic, potatoes, basil, bitter melon, corn, okra, peppers, mung beans and Asian greens. She does it because she likes it, it is more nutritious, and it saves money. Ju rides a bike to work and to her gardens and uses the bus when necessary. 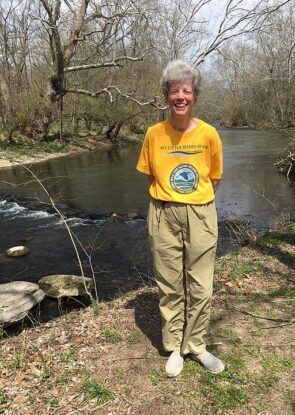 In 2007, Hope Taft and her husband, former Gov. Bob Taft, moved into their current home on the Little Miami River. Right away Hope started noticing trash on the banks and in the river. “It just didn’t look like it belonged there,” she said. What started with Taft and her neighbors initiating cleanup has become an annual event that has resulted in getting over 12,000 pounds of trash out of the river, including 975 tires. Early on, Taft realized that the pollution she couldn’t see was as much a problem as the visible trash in the river, so she began consulting with the Ohio Department of Natural Resources. The Little Miami Watershed Network, which resulted from her efforts, now provides advocacy and education for the watershed of which Yellow Springs is a part. Our village wells are fed by groundwater under and near the river. It is estimated that 60–70% of the water flowing down the river during the late summer comes from the wastewater facilities that dot the river – the first of which is the village’s. 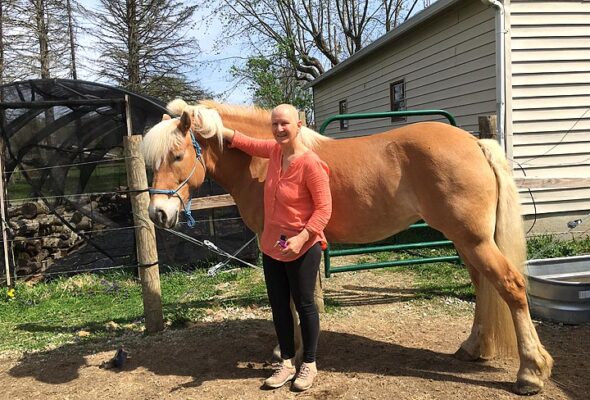 Sandy King with her oil-free transportation (aka her horse, Daisy). (Submitted photo by Marianne MacQueen)

Sandy King is an herbalist and a traditional-foods cooking teacher who grew up in and near Yellow Springs. As a working mom, she held a number of jobs and bought into the consumer culture. After raising her children, she realized that she wanted something different. She retired at age 55 and used her retirement money to purchase a home on one acre just outside the village. She attended herbal conferences to learn about food and homeopathy. During the Dakota Access Pipeline protests she realized that she was contributing to the problem by using gasoline to drive her car. Three-and-a-half years ago she sold her car and bought her horse Daisy. She now cooks on a wood stove in the winter and heats with wood. King comes to Yellow Springs on the weekends with Daisy and provides carriage rides around town on a donation basis. She uses those funds to provide for Daisy and her equipment. She lives on a shoestring, but she says, “I have enough.”

Kat Walter: “What started out as something to reduce waste morphed into something better that creates community.”

After Duard Headley and Kat Walter built their home on Fairfield Pike in 2013, Headley realized his soil was eroded. Having a degree in environmental studies, he pursued his interest in restoring natural systems by developing a prairie on his property. The benefits include: minimized CO2 emissions from not mowing; no fertilizer or herbicide use; carbon sequestration; and increased groundwater retention. However, Headley notes that it takes work, hence the term “managed” natural landscapes.

Kat Walter was doing research on zero waste strategies when she read about Repair Cafés which were started in the Netherlands. Rather than reinventing the wheel, she and Headley adapted the model and held the first Yellow Springs Repair Café in 2017. It is a volunteer-driven event where those who have skills — called the “fixers” — help people who bring their items to be repaired. The “fixers” help people see how they can fix things themselves. 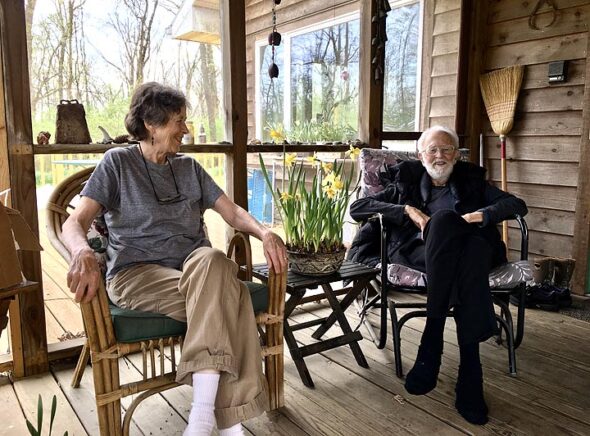 Faith Morgan and Pat Murphy:“We are now talking about whether we are going to make it.”

Faith Morgan grew up in the Vale, an intentional community just south of Yellow Springs. She and her husband, Pat Murphy, have been producing educational materials about climate change for a couple of decades, first through Community Service, Inc. (now Community Solutions/Agraria) and later through Project Curtail. Most people, they say, do not understand the magnitude of the problem caused by our use of fossil fuels and the production of greenhouse gases. In 2006, Morgan directed the production of the film, “The Power of Community: How Cuba Survived Peak Oil,” which details how Cuba transitioned from fossil fuel-based agriculture to small-scale organic farms. Murphy’s book “Plan C: Community Survival Strategies for Peak Oil and Climate Change” was published in 2008. Faith released her second film, “Passive House Revolution,” in 2013. It details a construction method begun in Germany that results in 80-90% reduction in energy for heating and cooling.

*The writer is the vice president of Village Council and Council liaison to the Environmental Commission. She can be reached at: mmacqueen@vil.yellowsprings.oh.us.