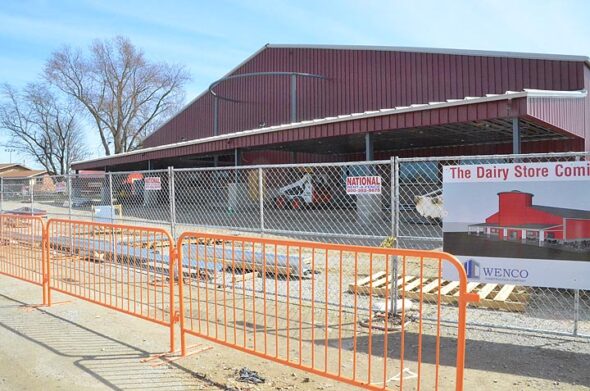 Work in progress: the new 22,000-square-foot Dairy Store at the southern end of Young’s Jersey Dairy 122-acre property. The $3 million facility is currently under construction, and will be finished by early summer. (Rendering by WENCO construction)

Young’s Jersey Dairy has been serving the Yellow Springs community since 1958, when they began selling raw cow milk to customers. The Young family ran the small business back then out of a 10-by-10 foot room that was added on to their historic barn. Since then, Young’s has slowly expanded the business to the one we know today, with the Dairy Store, the Golden Jersey Inn, Udders and Putters and more.

Dan Young is one of about a dozen family members who currently work at Young’s. He’s been in the family business for more than 50 years.

“My title is chief ice cream dipper,” Young said in a recent interview.

Changes are again coming to the growing food and entertainment destination, in part due to the pandemic. A new Dairy Store is under construction and a long-time restaurant is being turned into an event space.

The Golden Jersey Inn, which has been serving homestyle comfort food since 1998, closed in March of 2020 due to COVID-19 restrictions. The restaurant continued to offer carry-out to customers, but stopped because it was not making financial sense to the owners. The Inn didn’t reopen when restaurants got the green light to do so in early May.

However, the business was still able to operate the Dairy Store.

“COVID for sure made that type of operation very difficult to run,” Young said of the Golden Jersey Inn. “We are fortunate enough to have multiple different things going on to be able to accommodate the restrictions of the pandemic.”

There had been talk among the Young’s team to repurpose the Golden Jersey Inn into something else, such as a special events center. But the conversations had been mostly hypothetical until the pandemic.

“COVID-19 is definitely what caused us to reconsider what we are doing here,” Young said. “It is now a great time and opportunity to just change our focus of the Golden Jersey Inn from a sit-down restaurant to an events center.”

The Golden Jersey Inn will now be known as Young’s Events Center. Young’s is already connected to a large network of groups that hold outdoor events at their picnic pavilion, so in the future they will be able to accommodate the groups in the cooler months. They also hope to host new groups for business meetings, birthday parties, receptions, rehearsal dinners and, eventually, weddings.

Young’s will also cater the events with some of their old menu items, such as buttermilk chicken, meatloaf and beef and noodles. A huge expense for an events center is its kitchen, and the Golden Jersey Inn already has one.

Much of the work inside the building, such as tearing down walls to create an open layout, has already been finished.

“We have made changes,” Young said. “We’ve eliminated walls, so it is a more open space now.”

The owners hope to have the events center up and running by June.

Meanwhile, at the southern end of the 122-acre Young’s property, a new $3 million dollar Dairy Store is under construction.

Work began two years ago, but Young’s paused construction for five months in the middle of the pandemic because of the uncertainty of the times. The work has started again and Young’s hopes to have the grand opening in early summer.

“We have been thinking about a new Dairy Store for at least 10 years, if not 15 years, mainly because of capacity,” Young said. “The existing Dairy Store works great about seven months a year, but the other five months we have some of our giant weekends and events.”

The old store had the tendency to get overcrowded, Young added, and now, more than ever, it’s important to offer adequate space to socially distance, he said. The new facility will be 22,000 square feet, according to media reports.

The new Dairy Store will feature some additions. Customers will be able to watch ice cream and cheese being made. Young hopes it will offer an educational experience as well as more fun for families.

“Every day we will be making ice cream so you can watch that happen,” Young said. “While you are eating your deep-fried breaded cheese curds you can watch the cheese being made.”

After the new Dairy Store is complete, the old one, originally built in 1968 and remodeled in 1990, will be torn down and turned into additional parking. Parking has been a safety issue in the past for the business, Young noted.

Another change at Young’s that came about due to the pandemic is the creation of a drive-thru, which will remain in operation in the coming months. It was created quickly in May 2020 to continue to serve customers who wanted a safer option.

“I told the team on a Thursday, we know that we are not going to be able to take care of people safely when [attendance increases when] it gets warm outside, so we created the drive-thru,” Young recalled. “By that next Monday morning we had a drive-thru. It has worked pretty well.”

Since then, about one in four customers are served via the drive-thru.

Looking back, it’s been a challenging year at Young’s, which was greatly affected by the COVID-19 pandemic. Not only was the Golden Jersey Inn closed, but outdoor activities such as Udders and Putters and the batting cages were also closed by state order from mid-March until July.

At one point during 2020, revenue was down around 50% from the previous year, Young said. However, business has bounced back in 2021, aside from some weather-related difficulties.

“This year has been better. January was about even with normal times,” Young said. “February was down because we had an actual winter this year.”

But come this summer, things are looking up, with both the new Dairy Store and the Young’s Events Center expected to be open to ice cream lovers.

*The writer is a Ohio Wesleyan junior reporting for the News as a Yellow Springs Community Foundation Miller Fellow. She can be reached at elle.peifer@gmail.com.