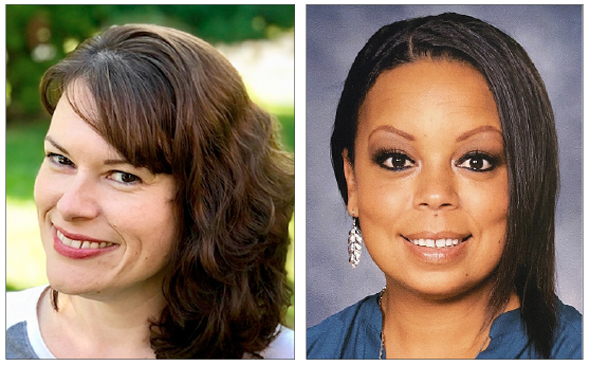 Cheryl Lowe, a fifth-grade teacher at Mills Lawn Elementary School, and Megan Winston, an assistant principal at Xenia High School, have been named as the two finalists in the Yellow Springs school district’s search for a new principal at Mills Lawn. (Submitted Photos)

Two finalists have been named in the search for a new principal at Mills Lawn Elementary School.

The school district announced earlier this week that a 12-member interview committee had selected Cheryl Lowe, a fifth-grade teacher at the school, and Megan Winston, an assistant principal at Xenia High School, as the top candidates.

Each candidate is scheduled to give public presentations and answer community members’ questions this week, with Lowe up first Wednesday, May 5, and Winston following on Thursday, May 6. Both events will be livestreamed and posted online on the district’s YouTube channel. District Superintendent Terri Holden said she anticipates making a hiring recommendation at the next school board meeting Thursday, May 13.

According to Holden, the district received 18 applications in about a two-week window in early April, after current Mills Lawn Principal Michelle Person announced her pending resignation effective June 30. Person, who came to the district from Cleveland Schools a year ago, has said that her decision to depart was based on family and business considerations.

Lowe, a native of North Carolina, has been a classroom teacher since her graduation with a bachelor of arts degree in elementary education from Lenoir-Ryne College in 2000. She has spent the past 13 years at Mills Lawn, where she has taught in the third, fourth, fifth and sixth grades. In that time she earned a master’s in educational leadership from Antioch University McGregor in 2010 and completed the Ohio principalship program at Wright State University in 2017.

“I love Mills Lawn,” Lowe said in a phone interview this week. “It’s literally like a second home. I love the people I work with. I love our students, and I love our families.”

She said that one of her goals if appointed principal is to work on restoring school-community cohesion that she believes eroded during distance learning and other pandemic-related difficulties.

“I feel like we need to come together as a Mills Lawn family and work together to rebuild that [community] culture,” she said.

In a separate phone interview, Winston also talked about the importance of building a school community, where students and staff feel “a sense of belonging and support.”

Born and reared in Xenia, Winston went through the public school system there before earning a bachelor’s in education, with a licensure in teaching mathematics to adolescents and young adults, from Wilmington College in 2004. She secured her master’s in educational leadership from the University of Cincinnati two years later; and more recently completed the Ohio superintendent licensure program at the University of Dayton in 2017.

Winston said she admires the Yellow Springs School district, where her younger sister graduated in 2007 as an open enrollment student. Mills Lawn counselor John Gudgel was the high school principal at the time.

“My parents did not see our home district as a place where she could be herself,” Winston said, adding that her sister still speaks fondly of her high school experience here.

Winston said she feels that the goals of the district align both personally and professionally with her own educational objectives, specifically to foster a strong foundation and drive for lifelong learning.

Both candidates said they knew from a young age that they wanted to become educators.

“That’s something that always felt like a calling for me,” Lowe said, though she didn’t have any educational role models in her immediate family.

“I was the first person in my family to attend college,” she said, noting that her grandparents left school after eighth grade.

“They encouraged me, and they were very hard-working people,” she said, but her career inspiration came from school itself.

“I felt a lot of comfort in school growing up,” Lowe said. “I had teachers who were really loving, kind people.”

For Winston, a career in education followed naturaly from her home life.

“I come from a long line of educators,” she said, noting that her grandparents were teachers, her mother taught and served as an administrator in the education department at Sinclair Community College and her father, who holds a doctorate in education, served as a vice president at Wilberforce University for over 20 years.

Winston said that while she enjoyed the six years she taught math at Beavercreek High School, she always leaned toward administrative work, where she thinks her strengths are best put to use in overseeing the health and progress of an institution.

From Beavercreek, she moved into administration in Dayton Public Schools, where she served two years as assistant principal at Thurgood Marshall High School, followed by five years at Horace Mann Elementary, a Pre-K through eighth grade school. She has been at Xenia High School, her alma mater, for the past five years.

Lowe said that after more than 20 years as a classroom teacher, she is ready to take on wider responsibilities.

“I see being a principal as an opportunity to have a bigger impact on a larger level,” she said.

Both candidates have two children who are now young adults. Lowe has a son who is a senior at Wright State University majoring in political science, and Winston has a son in his last year at the University of Findlay, where he is studying criminal justice. Lowe, who lives in Yellow Springs, also has a younger daughter who will be entering Sinclair Community College in the fall; and Winston has an older son who currently works in Xenia, where she also lives with her “very supportive” husband.

As for activities outside the school day, both educators are involved in local food efforts, with Lowe coordinating the volunteers of the Yellow Springs Food Bank. Winston, who played sports in high school, also participates in an intramural soccer league once or twice a week.

For their public presentations, the candidates were given current student competency data and asked to prepare a 15-minute talk on an aspect of the district’s strategic plan related to improving teaching and learning.

For Winston, an important piece is “making sure that teachers have the resources” to help students achieve the desired competencies. And she feels an effective school is a place where students, teachers and staff all have opportunity to learn and develop.

Lowe said that a necessary focus for her is developing “student agency,” where young people become “co-designers and co-creators” of their education.

“That’s really what we want our students to do in life,” she said.

Both candidates said they are grateful to be considered for the principal’s position.

Winston spoke enthusiastically about the prospect of joining the district.

“I’m so excited for the possible opportunity to work in Yellow Springs,” she said.