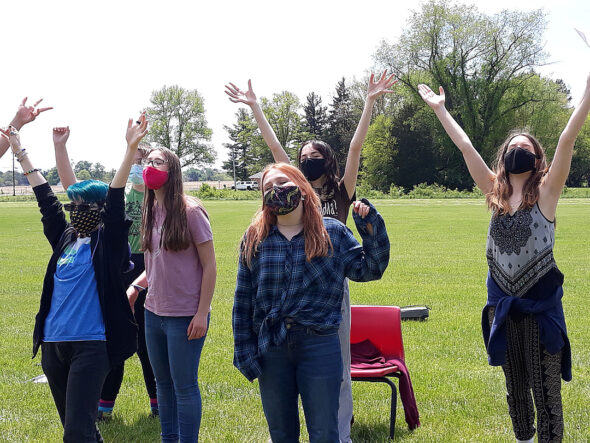 Emotions experienced throughout the past year are front and center in the original theatrical production to be debuted this weekend on the south lawn of the McKinney Middle School and YS High School campus.

“Please Stand By,” an approximately 60-minute work in one act, captures a year in the life of local students. But not just any year. The pandemic year, when previously normal life was put on hold, is the focus.

“The school year ended in chaos, and the next began in chaos,” shares one of the play’s characters.

The performers basically play themselves, but their words are a compilation of reflections written by many students in response to assigned prompts:

“What I was doing before the lockdown was …”

“The message I would give to people now is …”

In effect, the script was written by the entire student body, whose musings ranged from matter-of-fact pronouncements — “this year’s been a lot” — to poetic contemplations of existential considerations: “It’s a vulnerable state to live in the absolute knowledge that you’re entirely alone … and then the moment passes.”

Putting the pieces together into a narrative for the stage was undertaken by junior Amelia Hurley, who describes herself as “the dramaturge,” rather than “playwright” on the project, since the writing “wasn’t from scratch.”

Talking by phone after school recently, Hurley said she was given about 100 written reflections with which to form the script. An aspiring professional writer, Hurley came to the project through the suggestion of performing arts teacher Lorrie Sparrow-Knapp, who is directing the project.

“Organizing it was the hardest part,” Hurley said of weaving together all the different voices and experiences. “I didn’t want it to be too jarring. I wanted every transition to be intentional while also being true to the chronology of it.”

The timeline begins in spring 2020, as the pandemic hit, and follows through the ensuing months to the following spring, when the local schools and other aspects of the students’ life started reopening.

“Some of the [student] stories spanned a long period of time,” Hurley noted, adding that she eventually split the longer pieces into different sections of the play.

“I really wanted to show how much has changed and how much our perspectives have changed.”

The 12 months covered may have been shaped largely by the pandemic, but they also saw devastating wildfires in Australia and the western U.S., the ongoing killings of Black people by police, Black Lives Matter protests, a fraught presidential election and the violent insurrectionist attack on the U.S. Capitol, among other traumatic events.

And all that was experienced on top of being teenagers navigating school, relationships with family and friends and their own sense of self.

“I remember hoping for health and that everyone still had their family when they closed their eyes at night,” says one  character.

“I’m finding love for myself in myself,” says another.

“I don’t know if there’s normal to get back to,” muses another.

Venturing out onto an imaginary roof to bask in the spring sun, a teen responds to the new season.

“It’s opening a new hope of life and light in me,” they say of the experience. “A spring sun has never felt so inviting.”

The play’s presentation is in the style of “devised theater,” inspired by the interdisciplinary work of theater artist Ping Chong, Sparrow-Knapp said during a recent rehearsal.

The set is simple. Fourteen red plastic chairs, one for each of the actors, are arranged in two rows on the school lawn. The performance is mostly read, with scripts in hand, but there’s a lot of movement and interaction among the players as well. Everybody is on stage throughout the whole performance.

Sparrow-Knapp said that the decision to read, rather than memorize, lines helped simplify the production and eliminated an element of stress for the actors, who as the play states have been through “a lot.”

Music also plays an important role, as a handful of additional individual students as well as the middle/high school choir perform a variety of musical material, including some original work. Parent Caryn Diamond, who is also the district’s theater arts producer, will be on keyboards.

Sparrow-Knapp said she couldn’t be prouder of the performers, and has been inspired by the entire student body.

“They didn’t pull back,” she said of the vulnerability and authenticity in their reflections.

For Sparrow-Knapp, the overriding character that comes through the work is resilience. Despite all the trauma they’ve experienced or witnessed, the students have found hope, humor and joy while making new realities in their lives.

As rehearsal Sunday morning wrapped up, she told the performers that creating a new artwork, as they have done in making “Please Stand By,” is an act of resilience and hope.

“You have made a new piece of art that doesn’t exist on the planet,” she told the teens.

While several students said they had been a little skeptical about taking on a nontraditional production for the school’s spring play, they all agreed that they feel good about the work they’ll present to audiences this weekend.

After the past year, freshman Sydney Roberts said she “didn’t really see us doing a normal play.”

“This year is not like any other,” she said. But while “there were bad things, there were also good things and things neither bad or good, just things.”

Freshman Otto Cipollini said he was struck by how many major events occurred over the course of the year, and how many different issues they — and consequently the play — cover.

For sophomore Eve Diamond, the play captures not only the many aspects of the past year, but also shows the nature of life at any time, when sadness and joy exist side by side.

“Life kept on moving even though we were all stuck inside,” he said.

“Please Stand By,” will be presented at 6:30 p.m. Friday and Saturday, May 21 and 22, on the middle/high school’s south lawn. Admission is free, but donations will be accepted.