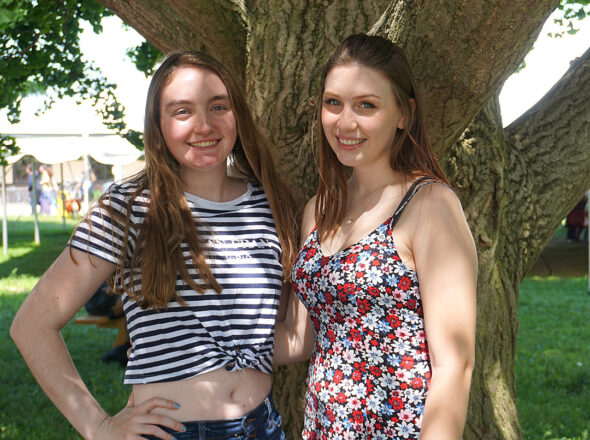 Saying that the Yellow Springs class of 2021 has had an atypical senior year is an understatement.

The more than 60 students graduating this week spent the bulk of the past year at home, logging onto personal computers and laptops for their daily classes amid the ongoing global pandemic. Their return to in-person learning, at first part time in March before going full time in April, truncated the time and experiences that traditionally mark and define a senior year.

The two seniors chosen to speak for their class at Thursday evening’s commencement ceremony say that while they feel disappointment and a sense of loss about what they may have missed, they also see in retrospect that they were able to evaluate their personal priorities and find purpose and direction despite circumstances not of their making.

Natalie Galarza and Kayla Ross were selected through an audition by a committee made up of Principal Jack Hatert, librarian and senior advisor Eli Hurwitz and teacher and counselor Dave Smith.

“Natalie and Kayla’s speeches stood out,” Smith said earlier this week at the school.

In separate phone calls, the young women reflected on their time in Yellow Springs schools and the ways they feel they’ve grown.

Both entered the district later in their school careers — Galarza as a high school freshman, after being homeschooled through her eighth-grade year; and Ross as a seventh-grader, having moved to town from her native Lancaster, Ohio. Both said their transitions were difficult, but made easier by kind and caring faculty and staff and a welcoming student body.

Having grown up in the village, Galarza said she already had “a lot of friends” when she entered high school. And her homeschooling experience may have helped her adjust to the district’s move to remote learning during the pandemic, but the school’s closure was still difficult.

“I’m used to being independent in my studies,” she said. “But the isolation was definitely hard.”

Staying involved in a variety of school-related activities helped, Galarza said. She played soccer and softball and participated in track. In past years, she was also a member of the swim team, but the squad’s season was canceled this year.

“One of my absolute favorite [activities] was doing School Forest,” she said. “I love to be outdoors … and School Forest is very, very inclusive for anyone who wants to try it.”

Galarza said that her experiences this atypical year have led her to redefine the concept of success. That’s the focus of her commencement address.

“In school, there is a success standard that we are held to, like grades,” she said. But during the past year she has found that success can be achieved in different ways, ways “that are more inclusive to everyone.”

She said she wants to encourage her classmates to define success on their own terms.

“I generally feel that everyone in my grade has achieved something … academic success or not. We’ve all come out just so much stronger. We all have this intense inner strength that isn’t always highlighted” by standard measures.

Like Galarza, Ross has stayed busy with extracurricular activities.

This year, she played varsity basketball, was co-captain of the cheerleading squad and ran track. Outside of the school setting, she participated in dance and gymnastics and played golf. In addition, she is an avid photographer and plays percussion. Amid the pandemic, she was able to have weekly online lessons with the drummer of a band she likes that’s based in Virginia.

“That’s kind of like a positive thing that’s happened during the pandemic,” she said.

She also launched a business early in the pandemic designing masks, donating the proceeds back to the school district. The effort became her senior project, winning an award this spring. She said she felt compelled to do something positive amid “kind of a horrific time.”

In recent months, she expanded the enterprise to include designs for water bottles, jewelry and other items.

Ross said she “was pretty shy” when she entered McKinney Middle School. She remembers an early parent-teacher conference when a teacher said she needed to learn “to advocate more” for herself.

The assessment is no longer true, she said. And her commencement speech will talk about the growth that she and her classmates have experienced.

“How Yellow Springs turned us into fearless thinkers,” she said. 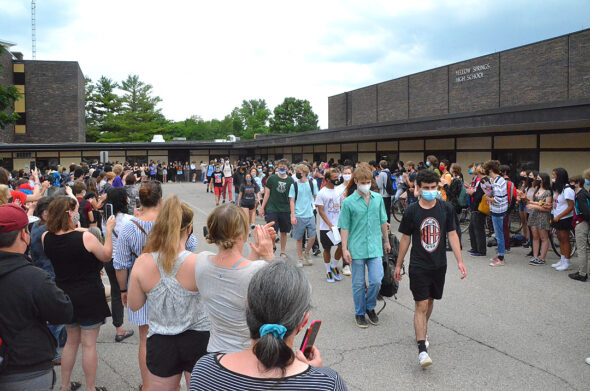 The YSHS Class of 2021 paraded in front of enthusiastic peers and parents as the traditional clap-out on Monday, May 24, was literally held outside this year. Though cheer and goodwill were in great supply, the main attractor seemed to be a mobile bakery truck, which handed out cupcakes, cake pops and cookies, as an anonymous gift to the graduates. (Photo by Matt Minde)

About $50,000 in more than 30 separate local scholarships and awards are going to this year’s graduating seniors. Typically presented during a public assembly at the high school, the awards were handed out privately this year, as they were last spring, due to pandemic-related restrictions on large in-door gatherings.

The high school has released the following list of recipients:

50th Class Reunion Leadership Scholarship: Created in 2016 by the class of 1966 and awarded annually through funds donated by members of each successive 50th reunion class, to honor a graduating senior who exhibits exemplary leadership qualities; $7,500, Arielle Johnson

Bulldog Scholarship: Initiated over 10 years ago by an anonymous former student while a sophomore in college; $1,000, Ian Sherk

Chris Sparks Social Justice Award: Established by the class of 1967 in memory of a seventh-grade classmate who modeled leadership and inclusion; $500, Annlyn Foster

Connect for Success: Initiated in 2019 by local company Electroshield, the award supports a first-generation college student; $500 a year for up to five years ($2,500 possible), Breanna Wallace

John T. McConville Memorial Scholarship: Given in memory of McConville, a physical anthropologist, to a graduating senior planning to complete a course of study at a certified educational institution; $1,000, Joseph Minde-Berman

L. Shelbert Smith Memorial Scholarship: In memory of the former chemistry professor, Yellow Springs school board member and tutor, for a student interested in a career in science or math; $2,000, Annlyn Foster

Martha Dell Cadow and Warren Dell Memorial Athletic Scholarship: Honoring a sister and brother who attended Yellow Springs High School in the 1930s and who excelled in basketball and golf; award recipients must have lettered in basketball and/or golf; $500 each, Kayla Ross and Haneefah Jones

Scholarship for the Study of History and the Social Sciences: Established by YSHS history faculty; $500, Jonas Bahn

Also announced this month were the annual college awards to local juniors, including:

Bausch & Lomb Award: worth $30,000 for a student who goes on to attend the University of Rochester, Amelia Hurley

Honda/OSU STEM Award: worth $12,000 for a junior to study science, technology or engineering at The Ohio State University, Lily Rainey

Rensselaer Medal: worth $120,000 for a student who goes on to attend Rensselaer Polytechnic Institute, Delia Hallett

The commencement ceremony for the Yellow Springs class of 2021 is scheduled Thursday, May 27.