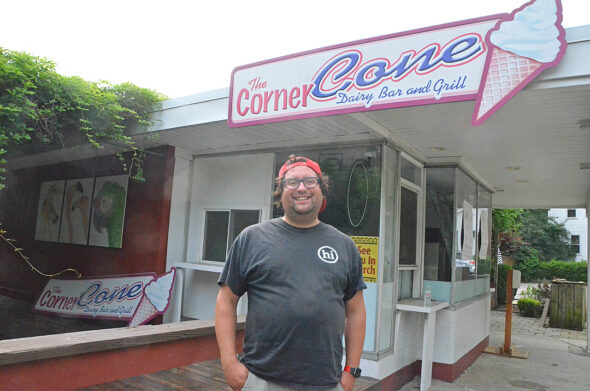 Those who have been waiting to enjoy a local soft-serve ice cream cone on a hot summer day may not have to wait much longer.

Villager Matt Kirk has purchased the Corner Cone, with plans to reopen the longtime ice cream stand sometime in July.

“See you in March” announced a sign affixed to the Corner Cone at South Walnut and Dayton streets, a location that has been pumping out ice cream cones for 66 years.

Yet this March came and went, and the shop remained shuttered. Kirk noticed the sign in late April, and decided to inquire about the fate of the beloved fast food spot.

“Like everyone else, I’m driving by saying, ‘Why isn’t the Corner Cone opening?’” he said.

Kirk looked further into it, and found that its Fairborn owner, Lawren Williams, of former local restaurant William’s Eatery, had some challenges reopening the establishment this season. Williams was also open to selling. And last week, Kirk closed on the property, for $330,000.

Two weeks ago, as the sale was still being finalized, this reporter found Kirk walking the perimeter of the ice cream stand, pouring a cleaning solution on a wooden deck slick with mildew.

“We need a place that’s not a hazard for people when they’re picking up their frozen treats,” he said.

Other preparations have been underway inside the 476-square-foot building, including deep cleaning, fixing a roof leak and reviving its numerous machines — cooktops, hot dog warmers, milkshake mixers and the like.

“We’re scrubbing everything,” he said.

Kirk plans to reopen the Corner Cone with a simplified menu that includes soft-serve ice cream in a handful of flavors and also available dipped, with rainbow or chocolate sprinkles, or made into a blizzard; Dole Whip, a nondairy soft-serve; milkshakes; popsicles; hotdogs; and popcorn.

“Basically it’ll be like a concession stand,” Kirk said.

Adding popcorn, he said, was a no-brainer because “it smells delicious, and it’s a complimentary product for ice cream because of the sweet and the salty.”

Kirk hopes to keep the Corner Cone open year-round, with a more limited menu in the offseason. He’ll be exploring breakfast items, as well as late night options for those leaving downtown watering holes. The shop’s equipment also includes a soft pretzel warmer and the nut roaster from the Nut Haus; those items too may find themselves on a future menu.

Staying is the property’s food truck tenant, Aahar India, which has been a fixture at that location for more than a decade. Not returning any time soon is bike rental, as many of the bikes have fallen into disrepair.

Kirk said he knows how important the restaurant is to the local community. It’s at a prominent location downtown, with a large outdoor patio, and a fast-food vibe.

“This is probably the only fast-food place in town,” he said.

The opportunity to buy the Corner Cone came at the right time for Kirk, who, with his youngest child now 2, was looking to get back in the job market.

But Kirk is grateful that instead of a long commute, he’ll have a local gig that will keep him closer to his family, which includes his wife, Dr. Kris Kirk, a pediatric ER doctor who grew up in town, and their two sons, Oliver, 8, and Elliot, 2.

In fact, the Corner Cone will get a slight name change in honor of his children — ice cream aficionados, of course — O&E’s Corner Cone, featuring the initials of his sons’ names.

Although he has business development experience, Kirk admits he’s never owned a restaurant before and will face a learning curve. He plans to be hands-on at the shop for the foreseeable future, with hopes of hiring an assistant manager soon.

“I have no background in soft serve,” he joked. “But the idea of being a business owner has never been foreign to me,” he added.

A Columbus native, Kirk formerly worked as an economic development professional, often as a liaison between government agencies and businesses. He worked in the State of Ohio’s Department of Development and in the economic development office of the City of Columbus. He got his degree in urban and regional planning from Miami University in 2005.

Asked about the financial viability of the enterprise, Kirk said he saw some financial figures from former longtime Corner Cone owner Bob Swaney, who purchased the shop 15 years ago.

“The margin on soft serve is strong,” Kirk said with a smile. “It’s a whipped air product.”

However, Williams didn’t reopen the shop as expected in March 2021. Reached by phone this week, Williams, who operates two restaurants in Fairborn, said he preferred not to comment on the matter. Swaney recently repurchased it from Williams and sold it to Kirk after five days of ownership.

Swaney originally bought the Corner Cone in 2006, beautifying the outdoor area with trellises and vines, among other upgrades. He began hosting new activities on the site, such as open mic nights, youth ukulele lessons, the 10-minute play festival, farmers market stalls and a food truck.

Before Swaney, the property was long owned by the Heaton family, with others running the business over the years. According to Tim Heaton this week, his grandfather, Russell Bales, of the local Bales Chevrolet, built the structure in 1955. There, an ice cream shop operated as a franchise of the national Tastee-Freeze chain. Later, when the chain closed multiple locations, it operated as an independent business, Freeze Dairy Bar.