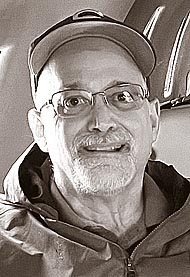 Stephen Jay Scherr passed away May 18, 2021, in Woodbridge, Va., due to complications of pancreatic cancer. He was 62.

While still at MSU, Steve began working at the Air Force Research Laboratory (AFRL) at Wright-Patterson Air Force Base. In 2008, after residing in Yellow Springs for 17 years, Steve moved to Lorton, Va., to support an Air Force program located there. Still an active AFRL employee, Steve had almost 41 years of service when he passed away.

Steve was a polymath, with interests too numerous and varied to list. His first love was the Cincinnati Reds and baseball, which appealed to and developed his love of statistics and data analytics. Stories are still told of the wall-long chart of Reds statistics he maintained in his childhood bedroom. But first and foremost, he was a lifelong, dyed-in-the-wool MSU Spartan.

Steve was active in Scouting, both in Ohio, with Yellow Springs Troop 78, and in Virginia, with Fairfax Station Troop 688, serving at the troop, council and district levels. He traveled extensively to national and international Scouting jamborees and received numerous volunteer awards.