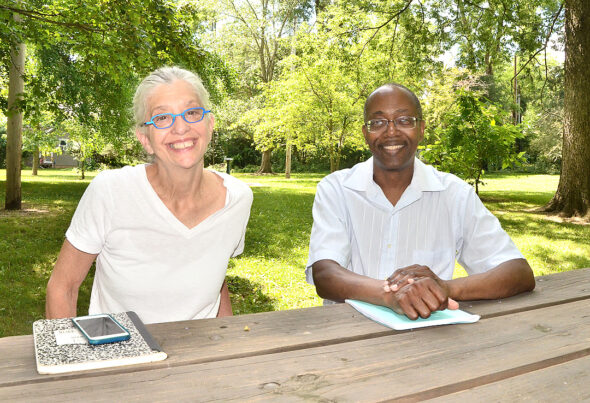 Neenah Ellis and Kevin McGruder helped create “Loud As the Rolling Sea,” a new WYSO radio series featuring the voices of Black elders and other villagers who lived through the civil rights era. Ellis is the former WYSO general manager and current director of the Eichelberger Center for Community Voices, and McGruder is vice president of academic affairs and associate professor of history at Antioch College and WYSO Community Voices producer. (Photo by Megan Bachman)

“Let our rejoicing rise/
High as the listening skies/
Let it resound loud as the rolling sea.”

A new collaborative radio project aims to preserve and amplify Black voices in the village.

Named after a lyric in the civil rights standard, “Lift Every Voice and Sing,” local public radio station WYSO’s new series, “Loud As the Rolling Sea,” brings to the airwaves stories of African American life in mid-20th century Yellow Springs.

It was originally conceived in 2010 as the Yellow Springs Civil Rights Oral History project, a collaboration that included participation of the James A. McKee Group, the Yellow Springs Historical Society and the Greene County African American Genealogy Study Group.

According to Neenah Ellis, director of WYSO’s Eichelberger Center for Community Voices, that group focused on elders in order to preserve their stories, coming up with a list of more than 100 people — Black and white — to interview.

“They understood the uniqueness of the community of Yellow Springs, and they wanted that history to be saved,” Ellis said.

Volunteers have since conducted nearly 50 interviews, and the first edited radio stories from the collection started airing on WYSO last month. Excerpts from interviews with Yvonne Seon and Alyce Earl-Jenkins are now available online. Next up are installments featuring Paul Graham and the late Jewel Graham.

And in another collaboration, the Yellow Springs News will print excerpts from the interviews in upcoming issues over the next several months.

What emerges from the interviews is a detailed picture of Yellow Springs before, during and after the civil rights era, whether or not the subjects were themselves part of any movement.

“It didn’t matter if they were involved in civil rights,” said Kevin McGruder, a WYSO Community Voices producer who was instrumental in the project. “Whether they were activists or not, they lived through it as Black people.”

Ultimately, it was the police killing of George Floyd, a Black man, in Minneapolis, Minn., in May 2020, that spurred WYSO to move more quickly to bring the stories to the airwaves, according to Ellis. Sometimes more than one hour long, they were edited to pieces around five minutes in length, with a longer version running more than 10 minutes.

“After George Floyd, I thought we need to really present this history,” Ellis said.

Ellis said it was important for today’s young activists to understand the roots of the movement, and to honor those of the previous generation.

“You have to know what happened in order to move forward,” she said. “We have these stories. … Many of the people are alive. It honors them to present this now.”

WYSO’s General Manager Luke Dennis was also moved by the moment to bring the project forward, emphasizing that the stories of elder Black villagers “build a bridge to the future.”

“It was never meant to be a looking backwards, it was, ‘What can be learned from the past?’” Dennis said.

Hearing the stories of those who participated or witnessed the civil rights movement may both inform and inspire today’s young organizers, McGruder added.

“It’s important for the youth to understand they are working in that tradition,” he said.

A ‘social history’ of YS

For McGruder, an Antioch College associate professor of history and vice president of academic affairs, oral histories are valuable first-hand accounts that shed light on the “granular details of daily life.”

“Social history is the history of everyday people,” he said. “It’s history from the ground up.”

McGruder added that personal stories are a type of “social history,” and though they are unfortunately not always preserved, can lend valuable insights to the understanding of events and times.

So interviewers, of whom McGruder was one, didn’t just focus on politics. McGruder instead asked the type of questions he would have of an elderly relative, such as, “What was it like growing up?” and “What brought you to Yellow Springs, and what was your experience when you arrived?”

Other interviewers were Venita Kelley, Deb Henderson, Amy Harper, Robin Heise and several Antioch College students. Also involved were several producers trained at the Eichelberger Center for Community Voices at WYSO, and Katie Davis, a producer and editor based in Washington, D.C.

McGruder found some common themes in his interviews. Many Black people came to the area from the South. Some came for jobs at Antioch College, or were employees at Wright-Patterson Air Force Base looking for a place where they could buy a house. Through the interviews, McGruder learned that there was “subtle segregation here,” and that many white people were not aware of it.

“It’s not perceptible if you’re not experiencing it,” he said.

Specifically, segregation was a fact of life when it came to public accommodations, including many of downtown Yellow Springs’ shops and restaurants, McGruder learned. That’s the kind of history preserved in family stories, not history books.

“Parents tell their children these things,” he said. “If you’re looking for that in a book, you won’t find it, because people didn’t write it down.”

McGruder also asked “What was it like to raise your children in Yellow Springs?” which captured the changing experiences of Black families across generations.

“We can see, through the experiences of children, the barriers they were navigating,” McGruder said.

In one of the first two interviews that have aired, longtime villager Alyce Earl-Jenkins talks about her experiences of segregation in her native Birmingham, Ala., as well as in Dayton and Xenia. She also recounts campus protests at Central State University and Wilberforce University in the 1960s and ’70s.

Yvonne Seon, who is the mother of comedian Dave Chappelle, speaks about moving to Yellow Springs because it was a “wonderful place to raise children” and shares how while there was segregation in town, there wasn’t the same “hard core racism and segreation” of other communities at the time.

Both interviews can be read or heard in either a short or long format at wyso.org.

The effort to collect these oral histories goes back more than a decade. According to Ellis, it was spurred by an effort to find a box of audio tapes of interviews with local Black elders, which were originally recorded in the 1980s and were thought to be stored in someone’s home. However, those materials were never found, so the group decided to begin anew.

Brooke Blackmon Bryan, then a WYSO employee and now an Antioch College associate professor and dean, took on the task of coordinating the project. The original planning group also included Jean Payne, Peggy Erskine, Bob Harris, Rick Kristensen, Phyllis Jackson and Robin Heise. The Yellow Springs Community Foundation provided a grant to purchase audio equipment to record interviews, and they were off running.

Initially, the groups came up with a list of interviewees that swelled to 108 people. Over the last several years, 47 interviews have taken place, with plans to continue to complete them all.

The oral history project dovetails with other activities at WYSO, and in the community.

When Ellis came to WYSO as its general manager in 2009, the station had been “in a tough period,” she recalled, and many of its archival materials were deteriorating.

Old audio tapes were kept in garbage bags and cardboard boxes in a moldy, wet basement, she said. However, they were meticulously catalogued, and represented a valuable archive of presentations, meetings and concerts at Antioch, in Yellow Springs and the larger region.

“Antioch was the center of a movement — the anti-war movement and the civil rights movement,” she said. “They were recording lectures and poetry readings. It’s the dream for an archivist.”

“When I saw the collection and the notations, I thought, ‘This is a treasure waiting to be unearthed,’” she said.

Ellis had just spent 15 years working in oral history at the Holocaust Museum in Washington, D.C., and understood the value of such materials. Through the Corporation for Public Broadcasting’s American Archive Project, WYSO was able to digitize and make available online more than 300 hours of historical material, most from the 1960s and ’70s. Villager Jocelyn Robinson went on to make use of the rich archive for her Rediscovered Radio WYSO series, which was funded through a grant from the Ohio Humanities Council.

At around the same time, The 365 Project had started to collect their own stories of Black villagers, launching the Blacks in Yellow Springs Encyclopedia. Last year, a 193-page encyclopedia profiling more than 100 people was released, and a 70-page supplement was added this year.

McGruder, who was involved in both initiatives, believes in focusing on people’s stories rather than just historical events.

“You get to the events through the people,” he said.