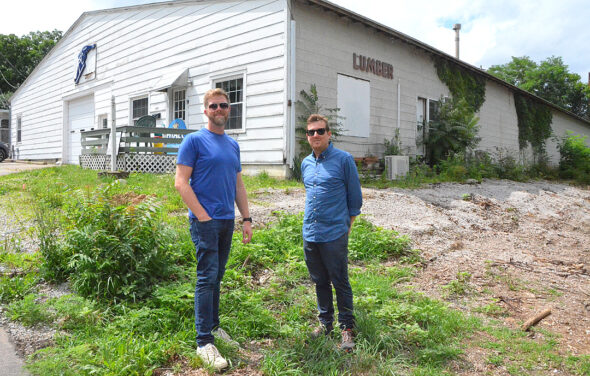 Patrick Lake, left, and Brian Drew have submitted plans to turn a former lumber yard on Cliff Street into an indoor public market with food and retail vendors. The Lumber Co. Market & Eatery was given a conditional use approval at Planning Commission’s July 13 meeting. The area in the foreground will feature outdoor seating along the bike path. (Photo by Megan Bachman)

Lumber yard to be market, eatery

A 1940s-era lumber yard may soon be the site of an indoor public market with eight to 10 vendors selling prepared foods and goods.

Once renovated, the Lumber Co. Market & Eatery, at 108 Cliff Street, would transform what is currently a storage facility along the bike path into an open public space where villagers and visitors can shop, dine and work.

That’s the vision of business partners Patrick Lake and Brian Drew, who both have long ties to the village and a desire to keep more tourist dollars in town.

Lake said the market could act as a “relief valve” for congestion downtown on busy weekends and meet a need for more “quality, quick-service food in town.” The project may add 20 to 30 jobs, according to their projections.

“This is about creating a platform for job creation, meeting an existing need and creating a public space,” Lake said.

Also important to the partners is the strengthening of a business corridor along the bike path that includes Millworks, and the restoration of a building with historic charm, they said.

“This is a space that can be revitalized,” Drew said. “It’s one of the older structures in town and we want to preserve it.”

Finally, they want to cultivate a public space where villagers can meet and work remotely from their laptops, using the facility’s WiFi. Restrooms would be open to the public.

“We want people to come in,” Lake said. “We’re competing for human capital and this is a big part of the ‘new work.’”

Planning Commission approved in a 4–0 vote a conditional use for the property at its July 13 regular meeting. The 0.67-acre property is currently zoned I-1, Mixed Industrial, which allows retail as a conditional use. Voting in favor were Frank Doden, chair, and members Stephen Green, Sarah Amend and Susan Stiles. Council liaison Laura Curliss recused herself from the discussion and vote, stating later it was due to a potential conflict of interest. 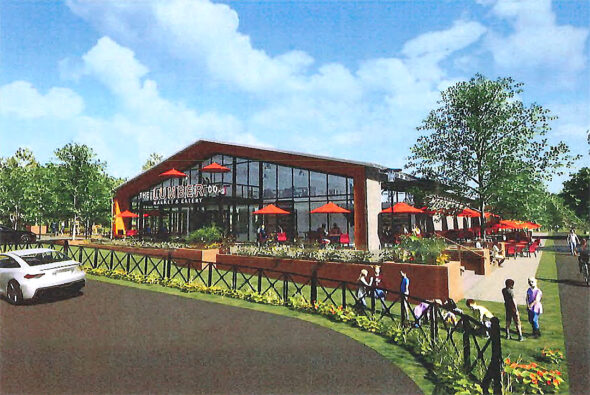 A rendering of the Lumber Co. Market & Eatery shows an entrance facing Cliff Street and an outdoor patio along the bike path. The Village is allowing the company the use of its right-of-way along the bike path for additional seating and bike racks. (Rendering by Max Crome Architecture)

The project’s design, completed by Max Crome Architecture, includes renovations to the 12,200-square foot main building, where tenants would rent stalls to sell their wares. It adds a 2,400-square-foot open mezzanine that is handicapped accessible on its upper floor, and creates a 3,000-square outdoor seating area along the bike path and a courtyard on the west side of the building.

“We’re preserving and restoring the place,” said Lake of the design, which calls for the main building structure to be retained, although much of the interior will be gutted.

“It’s a change, but it’s still honoring the past,” he added.

Plans also include the demolition of an existing storage structure on the west side of the property, which would accommodate a fire lane requested by Miami Township Fire-Rescue and connect to the Millworks parking lot. The project would create 15 on-site parking spaces, with additional parking needs to come from Millworks and public lots downtown, according to the application. According to the code, the developer must identify 65 parking spaces for the proposed use, but can count any spaces within 300 feet of the property.

“My biggest concern is parking,” she said. “I know that there are the public lots but if you look on the weekend, they are full. All the businesses in town are depending upon those.”

Lake defended the parking plan, but was open to looking at other options. He noted that there are 269 spaces within 300 feet of the project, four times more than required.

“There is more than enough parking to accommodate visitors to the Lumber Co.,” he said.

The Lumber Co. takes inspiration from other public markets, such as Columbus’ North Market, the Eataly Italian marketplace in Chicago and the Time-Out Market in Lisbon, Portugal, albeit on a much smaller scale.

At present, five to six food-based users and two retail users have expressed intent to rent space, according to Lake and Drew, who said they couldn’t release the names due to mutual confidentiality agreements. Around 60% of the businesses are minority-owned, and they intend to not duplicate goods sold elsewhere in town, Lake and Drew added.

“The tenants are either locals, people who have fallen in love with Yellow Springs, or those who have businesses that are perfectly suited for the community’s values,” Lake said of the initial group.

At the Planning Commission meeting Dino Pallotta of Dino’s Cappuccinos announced that he had signed a letter of intent to locate a coffee kiosk at the site. Lake also indicated that some food trucks who regularly visit the brewery may be among the market’s tenants, and that the local farmer’s market has been invited to rent space.

The venture is the first project for Lake and Drew, who said they were motivated by a desire to support the growing tourist economy. They cited a study completed as part of the 2020 Comprehensive Land Use Plan that identified a “multi-million dollar food service gap” in the village, which leads to some visitors dining and shopping outside of town.

“The report shows that there is a surplus of money that leaves the village,” Drew said.

According to that study, in 2017 the village had $3.6 million retail gap in the sector of food and beverage sales/service.

The Lumber Co. Market & Eatery would help meet the visitor demand that its proponents believe is perennial. 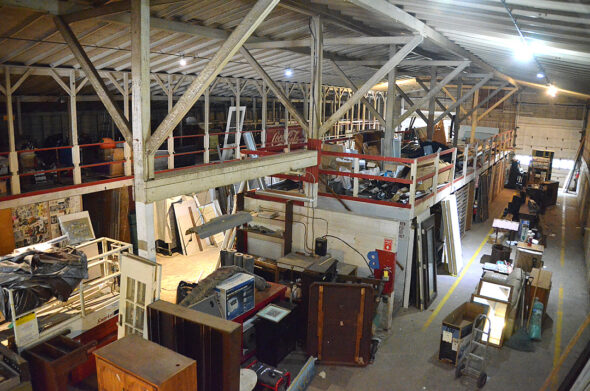 The current interior of the lumber mill. (Photo by Megan Bachman)

“This has been a tourist destination for over 100 years,” Drew said.

Drew and Lake have been closely observing the town’s economic trends, as both grew up in the area. Drew hails from a farm on Wilberforce-Clifton Road, attended Cedar Cliff Schools and graduated from Cedarville High School in 2000. After getting degrees in economics and finance, he worked for 15 years in business development and marketing. He lives on the family’s property, with his wife, Jillian, a Yellow Springs native, and their 2-year-old daughter, Tatum.

Lake grew up just outside of town on Dayton-Yellow Springs Road and attended the Antioch School and then Yellow Springs Schools through the seventh grade. He graduated from the Miami Valley School in 1997. Lake now runs the company originally founded in town by his father, Max Lake. Based in Cedarville, the company, Applied Sciences, is an advanced materials research and development firm. Lake has degrees in chemistry and chemical engineering. He lives in town with his wife, Carla, and their children, Henry, 10, and Ellie, 7.

Lake and Drew started working together professionally several years ago, when Applied Sciences hired Drew’s business consulting firm. Drew is now the company’s marketing and business director. Only recently did they decide to team up on a local development project.

“We recognized that we had a great dynamic,” Drew said of the duo, officially working as Massie’s Creek Ventures, LLC.

Specifically, the idea for the Lumber Co. Market & Eatery came during the pandemic, when, after breaking both of his arms, Lake couldn’t work, so spent his time walking around town. After walking by the Cliff Street space along the bike path several times, he got the idea, then approached the building’s owner, Les Guilford. Guilford, a contractor who used the space for staging materials and other storage, was open to selling, and the two parties are expected to close on the property sale this week, Lake said.

Originally built in 1940, the 108 Cliff Street building was home to Erb Lumber, PK Lumber and the Yellow Springs Lumber Company, according to prior News articles. When Bob Baldwin bought it in 2003, he told the News he was considering creating a business incubator there, but it has mostly been used for storage since. A gym and personal training facility, Posterior Chain, also operates at the site.

Looking ahead, Lake and Drew don’t see themselves personally starting any new businesses, but hosting a mix of existing and startup businesses who would benefit from working out of a shared facility. Those amenities will include shared dry and cold storage space, bathrooms and dining areas. After the facility is complete, they will act as property managers, they said.