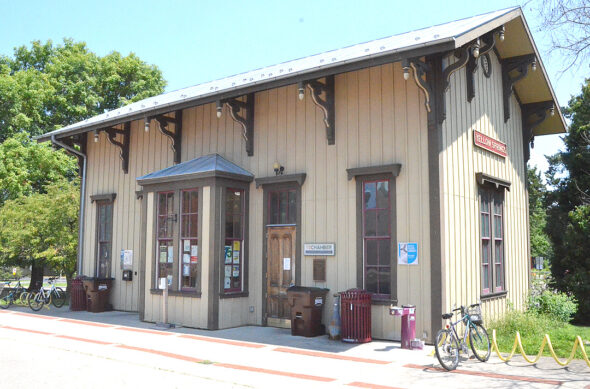 The Yellow Springs Train Station is also the location of the YS Chamber of Commerce offices. The Chamber’s board of directors reversed their position on the hiring of a new director Elizabeth Ford, following backlash from Chamber members and villagers after posts on her personal Facebook page surfaced. (Photo by Matt Minde)

Just 13 days after being hired, Elizabeth Ford is no longer the executive director of the Yellow Springs Chamber of Commerce.

In an emergency meeting on July 20, the Chamber’s board of directors reversed their position to hire her following backlash from Chamber members and villagers after posts on Ford’s personal Facebook page surfaced.

Since Ford was still in a probationary period, the board decided to rescind the employment offer, stating in a press release that material on Ford’s Facebook page “did not represent the best interests or the community values of Yellow Springs.”

Ford, whose hiring was effective July 7, 2021, was chosen by a small group of executive committee members without input from local business owners who sit on the board. That’s in violation of Chamber of Commerce bylaws that require the input of the entire board. The press release explained that the decision to exclude the full board membership was made to expedite the process in order to mitigate the financial struggles of the COVID-19 pandemic.

Numerous calls and emails were made to the board’s four executive committee members seeking comment. Two board members reached on the phone declined to comment on how the decision to hire Ford was made.

Ford, of Xenia, was hired to replace former Executive Director Karen Wintrow, who served in the role for 13 years. Wintrow left the position Oct. 23, 2020 to be near her son in New York; longtime Chamber employee Alexandra Scott served as interim director after Wintrow’s departure, and left the Chamber earlier this month for a new position at YS Home, Inc. Ford would also have served as special events coordinator, a position formerly held by Scott.

In an interview with Ford before her social media posts came to light, Ford explained that she has over 21 years of experience in marketing and business leadership. She said that while pursuing a degree in visual communications, she worked at Courtesy Card, a print shop formerly located in downtown Yellow Springs where Dragon Tree Tattoos and Gifts is currently located. She worked in visual design and branding for the Dayton Dragons, Orthopedic Associates and Dayton Outpatient Center, among others. Ford is also the chairman for the Naomi Foundation, an organization that helps widows and orphans of the Rwandan genocide. Ford resides in Xenia with her husband, Brian, their mini Aussie, and three Mini Rex rabbits.

“I applied for the job because I fulfilled all of the requirements, and I had a wonderful experience working in Yellow Springs in the past,” Ford said.

According to the Chamber’s job description for the executive director, applicants must have five years of leadership experience; strong communication and presentation skills; and preferably, a bachelor’s degree in marketing, business, or public relations. Job responsibilities include acting as an ambassador for Yellow Springs, having knowledge of the community and marketing for businesses. Ford added that the position would require that she manage the Chamber’s social media pages, which include the Yellow Springs Chamber of Commerce page, Handcrafted 68 and Yellow Springs Street Fair.

“I have to say that the posts that I’ve seen give me pause and make me worry that this person is not a good fit for our community,” Sharp said in a later interview with the News. “There are things that she posted that are painful to me as a Black person.”

Posts publicly shared by Ford on her personal Facebook page display controversial views, such as “People demand the police get new training. How about training your children to act like they got some morals and respect” and “white privilege is nonsense.”

In addition to posts about white privilege and police brutality, Ford shared several memes with disparaging comments about members of the trans community, with one image threatening harm to a person who chooses to use the bathroom that reflects their gender identity rather than their biological sex. In addition to  business owners, several community members, including Shane Creepingbear, were outraged at the posts.

“It’s not about someone’s political affiliation,” he said in a phone interview. “But if someone is being openly transphobic, we should be concerned. It isn’t one post. It’s over and over. It is alarming, to say the least.”

In a follow-up interview after her firing, Ford claimed that the posts are a small part of her overall online presence, and that she shares posts that will begin conversations, even if she does not agree with the message of the post. She explained her sharing of posts with transphobic sentiments as simply sharing her opinions about current events.

“What is abhorrent is that those on this Chamber witch hunt have twisted that [meme] and perpetuated it as transphobic, when it doesn’t mention that or say that in any way,” said Ford.

Ford also claims that many villagers attacked her in online postings for her Christian faith and because she voted for Donald Trump. She called the online discussion “a strategic plan to oust me” as a part of a larger conflict between the Chamber and its local membership.

Ultimately, Ford maintains she has experienced online discrimination and bigotry from business owners and villagers, but said she will continue to treat people in accordance with her Christian values.

“I love all people as God has commanded us to. I believe Yellow Springs needs missionaries who peacefully demonstrate the love of Christ by how they live their life,” Ford said.

“This is just another example of how we are struggling to feel represented by the Chamber,” Sharp said.

Other Chamber members reflected Sharp’s concern, pointing out that they did not have any information about the hiring processes, were denied access to potential candidates’ resumes, and were excluded from the decision to hire Ford, which was made by an executive committee consisting of four of the board’s then-13 members.

“We are very disappointed in the leadership of the Yellow Springs Chamber of Commerce, and at this time we do not wish our store, Yellow Springs Hardware, to be associated with them,” Pomeranz and Anderson wrote in an email to the News.

Asked about Ink Art Collective’s departure from Chamber membership, Burke explained that she did not trust the Chamber to represent her values.

“When we found out that Ford was the hire, we realized that the Chamber ultimately did not have our best interests at heart,” Burke said.

Additionally, Pallotta remarked that the board needs to make further steps towards accountability to resolve the issue.

“They know what they did, and I think they need to be out,” Palotta said.

As of press time, no members of the executive committee agreed to speak on the record about the issue, though Gery Deer, the former president of the board, is no longer listed as a member of the board of directors on the Chamber’s website. Other members of the executive committee are Nick Gaskins of Bing Design, Ashley Mangen of U.S. Bank and Ryan Aubin of Mills Park Hotel.

The board’s hiring decision, paired with an overall feeling of underrepresentation, has encouraged local business owners to be more vocal about a new collaborative group called the Downtown Business Association, or DBA. The DBA is a collective of 68 businesses focused on marketing strategies and forming relationships within the village. Its members communicate on a private Facebook page. Among the DBA’s members are Sharp, Burke and Brittany Baum, owner of The Greene Canteen, who is also a Chamber board member.

“Our goal is to make sure that the things happening in town are reflective of the businesses in town and the community,” said Sharp of the group. “We understand that we are not a monolithic community, but we have to be able to work together.”

The DBA differs from the Chamber in that it only extends membership to business owners within the village. According to their bylaws, the Chamber’s membership is open to “any individual person, firm, corporation, partnership, association or legal entity having an interest in the purpose of the Chamber.” To that effect, the Chamber has members from the greater region, including businesses from Xenia, Kettering, Springfield and Columbus. Sharp and Burke, members of the DBA, explain that the organization is in its infancy, but it will seek to represent the interests of businesses in Yellow Springs and add value to the village.

“Because we are local, we are going to do what’s best for our neighbors and the community,” Burke said. “The Chamber is collecting our money and serving other businesses. If they want our money, they’re going to have to earn it.”

Though the DBA is a separate entity, its members want to work in tandem with the Chamber to reach shared goals. Baum has tried to act as a liaison between the two entities.

“For the last year, I’ve been trying to build a community between the downtown businesses and the Chamber. This situation has totally put that process into an upheaval,” said Baum.

“We have every intention of working with the Chamber, but this has definitely been a wrinkle,” Sharp added. “For such an outward facing position, we [the businesses] want to have input on hiring.”

While the press release submitted by the Chamber’s board claims that they will be working with the full board of directors to fill the executive director position left vacant by Ford’s firing, they have not commented on what procedure they will follow to ensure the next hire is a mutually agreed upon candidate. That said, at least one member recognizes a need for change.

“We will be discussing those things in the coming weeks as we fill in some of the  day-to-day activities,” said Baum. “We will do our best.”

In addition to Gaskins, Aubin, Mangen and Baum, members of the Chamber’s board of directors are Minerva Bieri, Sarah Courtright and Gariot Louima.

Brian Housh, Terri Holden, Nick Boutis, Jeannamarie Cox, Kat Walters and Gene Barnett are community liaisons to the board, and are not voting members.

*The Yellow Springs News is a current member of the Chamber of Commerce and the Downtown Business Association.