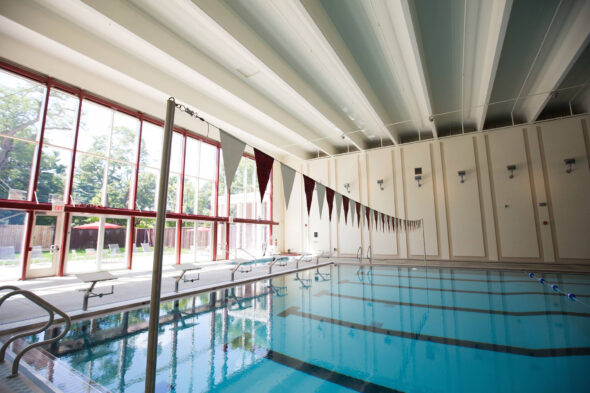 The pool at the Antioch Wellness center as it appeared in 2015. (Photo from Antioch.edu)

When the Antioch College Wellness Center reopens, it will be under new management.

The Yellow Springs Development Corporation is finalizing an agreement with the college to reopen the fitness center, which has been shuttered since March 14, 2020.

No date has been set for its reopening, but the two groups hope to reach an agreement by the end of August.

It will work this way: The YSDC will create a subsidiary that manages the operations of the Wellness Center. Antioch students and staff will continue to have access to the center, along with paid members. The YSDC subsidiary will not take over ownership of the building, and will not pay rent to the college for the use of the property.

In interviews this week, college and YSDC leaders expressed optimism about the arrangement, which was announced at a special YSDC meeting on Friday, July 23.

For Antioch, it means less time and money spent on running a gym, an activity which it sees as detracting from its core educational mission.

Sharen Neuhardt, a local lawyer and trustee who is also the college’s acting senior vice president, said the change will help the college become more “strong and stable.”

“We can’t be everything to all people,” Neuhardt added. “We have to realize our No. 1 strategic goal is a four-year residential college.”

Specifically, the college will no longer shoulder the overhead costs for the center, including its payroll, maintenance and management.

“It also frees up time and mindspace,” local trustee Maureen Lynch added of the benefits to the college.

The YSDC views its role as stepping in to help the center get back open. In addition to providing some jobs, it’s an important local asset, according to YSDC President Lisa Abel.

Looking ahead, the YSDC hopes the Wellness Center can expand to meet additional local needs.

“There is a lot of upside to this,” Abel said. “We could extend the hours, focus on space rental and offer opportunities for healthcare practitioners to come in.”

“We know the community is anxious for it to reopen,” she added.

Over the months, Wellness Center members have grown increasingly frustrated with the center’s ongoing closure and what was perceived as poor communication with members. Neuhardt said that it has taken some time for Antioch to “do things the right way” with regard to the Wellness Center’s future, but that the college, like others, is looking forward to its reopening.

“The Wellness Center is a big thing that the college can offer our students,” while bringing community members onto campus, “makes our campus more vibrant,” she said.

The YSDC’s makeup was attractive to the college, which was looking to involve a community group in managing the center. In the words of Lynch, who recently became an ex-officio member of the group, the YSDC members are “pillars of the community.” The college never considered selling it, the two trustees said.

“We approached YSDC first,” Neuhardt said. “We weren’t looking to turn over the operation of the Wellness Center to a commercial entity.”

Added Abel of the YSDC’s intentions for managing the facility, “We’re not just going to turn it over to the ‘Y.”

After years of community interest in a local fitness facility with an indoor pool, the Wellness Center opened to great fanfare on Sept. 6, 2014.

Under then-Antioch-President Mark Roosevelt, the college undertook an extensive, yearlong, $8 million renovation of the former Curl Gymnasium, originally built in 1929.

A local fundraising effort raised about $1 million toward the renovation costs. The college paid for the rest of the costs outright, and the building carries no debt, according to Neuhardt this week.
The 44,000-square-foot Wellness Center featured a six-lane pool, large hot tub, an equipped workout room, multiple gyms, racquetball courts and yoga studios. Before it closed, it had 1,611 members, including college students, faculty and staff, according to the college this week. About half resided in Yellow Springs.

On March 13, 2020, the Wellness Center announced that it would voluntarily close for one week the following day to slow the spread of COVID-19. That closure became required and longer-lasting on March 16, when Ohio Gov. Mike DeWine ordered all gyms to shut their doors.

Wellness Center memberships were suspended, which meant those who had already paid annual membership dues were not refunded, but would have access to the center for the number of months they paid for, whenever it reopened. Those with monthly memberships, or whose annual memberships expired after the closure, were not charged.

But when fitness centers in the state were given the green light to reopen on May 26, 2020, Antioch chose a more conservative approach. One factor was the higher than average age of the center’s members, according to Antioch Vice President for Operations and Business Hannah Montgomery, who is also a voting member of the YSDC.

At the time, the college “never thought of opening it,” Neuhardt added.

When students came back to campus that fall, the college was focused on ensuring that its students and staff were safe; the entire campus, in fact, was closed to outside visitors.

Although COVID-19 was the main factor keeping the facility closed for so long, financial considerations also played a role, according to Montgomery. Looking at different operating scenarios where there would be staggered visits and lower attendance, the college didn’t see how it could keep the center in the black.

So when other fitness centers reopened as a necessity, in order to stay in business, it actually made more sense for the college to keep the Wellness Center closed, Neuhardt explained.

“We were not willing to take any chances with the safety of students and college leaders,” she said. “Our business is educating these students, not running a [commercial gym].”

Even after the vaccine became available earlier this year, concern over COVID-19 was simply too great, and the college focused on keeping the campus safe, Montgomery added.

In response to the Wellness Center’s prolonged closure, many members wrote letters — and one poem — to the Yellow Springs News to express their dissatisfaction. Some noted that they were forced to continue their exercise regimens at other area gyms, potentially risking their health at places with higher COVID-19 infection rates. Others complained that their annual memberships were not refunded, including some who had just renewed.

College leaders hope that the recent arrangement will be seen as “good news” to members and villagers alike, according to Neuhardt. The college will also make sure that the agreement with the YSDC includes the provision that all existing memberships will be honored. Montgomery said 219 members have time remaining on their memberships.

For the YSDC, however, those fees won’t be able to be used for operations, as they have already been spent. As such, the group is currently looking for ways to cover starting costs for the center, which will include the salary of the manager and other employees. In the meantime, the college has continued maintaining the facility, which Montgomery said is in “great shape.”

Going forward, there may be changes to membership rates, Abel said. The group’s first step is to form a subcommittee to find someone to manage the center. Abel said the YSDC has not discussed whther former employees will be rehired. That will likely be the decision of the new manager.

The YSDC may also create either an LLC or a 501(c)3 to run the Wellness Center, with the goal of a self-sustaining enterprise. In May, the YSDC earmarked $3,000 to investigate the formation of an LLC for development purposes, but did not disclose the reason at the time. Abel shared this week that the LLC discussion was related to the Wellness Center.

According to Montgomery, for the college, the Wellness Center was “budget neutral” and not a “significant revenue generator.” However, college leaders think the center could actually turn a profit once in the hands of an outside group.

“The college is good at a lot of different things, but we didn’t have a lot of ability to capitalize on the economic potential of the Wellness Center,” Montgomery said.

Following an executive session for the purposes of “real estate and business development” at its July 13 regular meeting and continued to the July 23 special meeting, the YSDC voted to enter into a collaboration with Antioch to reopen the Wellness Center. Abstaining from the July 23 vote were Montgomery and Kevin Stokes, YSDC members who work at the college. Lisa Kreeger, Steve Conn Steve McQueen and Sarah Courtright were absent.

The YSDC has been officially designated as the community improvement corporation for the Village of Yellow Springs and Miami Township, and is subject to state public meeting and public records laws.