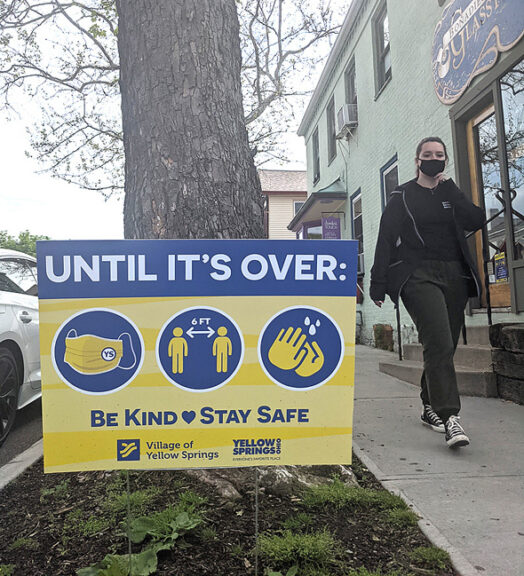 At an emergency meeting on Monday, Aug. 9, conducted remotely via Zoom, Village Council declared a state of emergency in the Village and re-enacted its downtown mask mandate, effective immediately.

The move came after rising case counts associated with a new, more contagious variant of the SARS-CoV-2 virus that, while mainly affecting the unvaccinated, is sickening some vaccinated locals, according to anecdotal reports.

Council member Lisa Kreeger, a registered nurse, said at the meeting that the state of the pandemic is “disappointing and dangerous” after a summer of lower caseloads and relaxed restrictions.

“This is so very disappointing,” she said. “We’ve always said this is a nasty bug, but the Delta variant is a very serious variant. It is, by far and away, more contagious.”

The mandate applies indoors in the Central Business District, and outdoors on public property downtown such as sidewalks when it’s not possible to keep a six-foot distance from others. Masks must also be worn in government-owned facilities such as the Bryan Center, and street vendors and buskers could be cleared from sidewalks for obstructing them.

Despite a vaccination rate of 72% of eligible residents in the 45387 ZIP code, cases of COVID-19 are rising here, as well as in the rest of the county and state. In Greene County, where the vaccination rate is lower than the state’s, COVID-19 case averages are now on par with spread during February 2021 and October 2020.

Miami Township Fire-Rescue Chief Colin Altman commented on the worsening situation by noting that area hospitals are at 94% capacity, due to both an influx of COVID-19 patients and staff shortages. Altman, in addition to supporting the Village mask mandate and urging against “the three-minute hug at Tom’s,” said the fire/EMS department is now requiring its employees to be vaccinated.

“We need to take steps because we are getting to that point where the hospitals are overwhelmed,” he said.

Council President Brian Housh said the Village has been monitoring a “constantly changing situation” and decided to act in the absence of new state-led restrictions. Ohio Gov. Mike DeWine has been hampered in his ability to enact pandemic measures such as mask orders after the Ohio Legislature stripped him of such powers earlier this spring.

“Yellow Springs has been at the forefront of these issues, being as proactive as we can and taking a lead on safety measures,” Housh said.

Council member Kevin Stokes said he was “112% in favor of a mask mandate” and that the situation was serious enough to warrant drastic action.

“We are taking this action to save lives, plain and simple,” he said. “For anyone who does not want to live, work or shop in Yellow Springs, I would submit that we will be OK with you if you come back later.”

Not all Council members were on board with the mandate. Laura Curliss was opposed to any outdoor masking requirement, even if a six-feet distance cannot be maintained, and also to a section of the legislation aimed at limiting vendors and buskers on the sidewalks.

“As far as I know, there is not one single, documented case of COVID transmission out of doors in the world,” Curliss said.

But Curliss’ motion to strike those portions of the legislation was not seconded. The measure passed 3–1, with Curliss voting against it; Council Vice President Marianne MacQueen was not in attendance.

Yellow Springs may be the first community to bring back a mask mandate after a statewide mask order, in effect for 10 months, was lifted in May.

In July 2020, the village was one of the first municipalities in the state to pass a mask mandate, two weeks before the state did so. The original local mask order expired on June 2, 2021, when Ohio’s state of emergency ended. The Village state of emergency was tied to the state’s at the time.

Before that, in May, Gov. DeWine had adjusted the statewide mask order to match new CDC guidance that fully vaccinated people no longer needed to wear a mask or physically distance except where required to by private businesses, healthcare settings and public transportation.

Those who are not vaccinated, however, were advised to continue to wear masks and social distance, but with no enforcement mechanism.

Because local laws can be stricter than state measures, and since Ohio has yet to pass a ban on mask mandates — like Florida and Texas have — Yellow Springs Village Council was able to pass a new mask order this week.

Housh said at the meeting that while downtown business owners previously said that they wanted the flexibility to enforce their own rules, more recently he has heard calls for Village action. Asked for details, Housh said the Village did not conduct a survey of businesses, but that he personally heard from “about 10” businesses who favored a mandate. Council’s packet included support letters for a mandate from three shops: Yellow Springs Toy Company, Asanda Imports and Ohio Silver.

On the former, Housh said he and Village Manager Josué Salmerón told the Yellow Springs Chamber of Commerce, “It may not be a good idea to have an October Street Fair.” The event, which draws an estimated 25,000 visitors, is scheduled for Oct. 9.

On the latter, Kreeger urged Council to set a benchmark for COVID-19 cases that would trigger remote meetings at the Village. Council Clerk Judy Kintner shared that, at present, one Board of Zoning Appeals member and one Planning Commission member would not participate in in-person meetings due to the coronavirus situation.

Although no decision was made, several officials suggested that all public meetings go remote if Greene County meets designations for “substantial” or “high” spread, as determined by CDC guidelines. A county’s spread is “substantial” if COVID-19 cases rise above 50 per 100,000 for a seven-day period; its spread is “high” if that figure goes higher than 100. Greene County averaged 112 cases per 100,000 over the last week.

In other Council business at recent meetings:

Council voted unanimously at its July 19 meeting to annex 34 acres on the south end of town in Miami Township into the village for a housing development.

Oberer, a Miamisburg semi-custom home builder, owns 55 acres at the southern end of Spillan Road, with 17 acres already within village limits. Oberer plans to build 138 housing units, with houses expected to start at $280,000. It is projected to be the largest new housing development in Yellow Springs in decades.

At the meeting, Council members debated the costs and benefits of annexing the land. Curliss said she wanted to see the actual costs the Village would incur to provide services to the neighborhood. Village officials said the Village would get $7,000 more annually if the township property was annexed, in addition to income tax revenues from its residents. MacQueen said she supports the project since it would “take more pressure off of the housing market.”

From the floor, area neighbor Matt Kirk aired worries over traffic, as many residents walk and bike on Spillan. Oberer representative Greg Smith responded that a similar project with 99 homes and only one entrance has caused no problems.

In response to a News question, Housh said that the development agreement between the Village and Oberer is currently being worked out, and that the villagers who have participated in that process have included: Housh and MacQueen, from Council; Salmerón, Public Works Director Johnnie Burns and Village Planning and Zoning Administrator Denise Swinger, from the Village; representatives from Home, Inc.; and Kirk and Joshua Miller, citizens.

Review for review board

Council continued talks on July 19 about forming a Citizen Review Board, an independent body that would investigate citizen complaints against the police. Curliss and Kreeger presented a plan to have an outside lawyer review their proposal. Salmerón and Village Solicitor Breanne Parcels raised concerns about a “tight budget” to do so. Parcels added that Council has previously allowed its solicitor to choose the outside lawyer when an external review was requested.

Council unanimously agreed to use $2,000 for the external legal review. But the body voted 3–2 on the review, with Kreeger and Curliss opposing, after MacQueen added a section requiring Parcels to bring Council a list of possible lawyers to do the review.

At the July 19 meeting, Council voted 3–2 to approve a $25,000 contract with Piper Fernway to draft a Climate Action Plan for Yellow Springs in six months. Council members Curliss and Kreeger were opposed.

Fernway was selected at the recommendation of the Environmental Commission after two candidates responded to a Village request for proposals, or RFP. Kreeger raised concerns about that process, asking why “only two people were considered” and why there was a rush.
Salmerón said the RFP was sent out through the “usual channels” and posted at a few area universities. Housh defended the plan as “hugely important for the village,” which he said should take proactive steps to deal with climate change.

Fernway was formerly an alternate for the Environmental Commission, where she started advising the group on how to create a climate/sustainability action plan before Village officials recommended asking for Council funding. Funds for the plan are slated to come from the Village’s renewable energy credit sales.

On July 19, Village officials explained efforts to improve the water quality at Ellis Pond in response to a question from this reporter. Earlier this year, following a fish kill at the pond, the Village tested water samples and found low dissolved oxygen levels had contributed to the formation of toxic algae in the waters. The Village laid barley bales in order to inhibit new algae growth, and installed aeration pumps that were to be operational by the end of July. Burns said the pond’s shallow depth, at just 2.5 feet across much of it, contributes to algal growth due to high heating in the summer.

• Council voted unanimously on July 19 to commit to $12,000 for Home, Inc., in 2022. The funds will come from the general fund and be used as a match for a $200,000 USDA grant that would provide money for local homeowners to make major repairs and weatherization upgrades.

• At the emergency meeting on Aug. 9, Council approved a settlement agreement related to litigation against opioid companies for their role in the opioid crisis. Village Solicitor Breanne Parcels estimated the Village would receive between $20,000 and $29,000 from the settlement. The vote was 3–0, with Council members Curliss and MacQueen absent during that portion of the meeting.

• On July 19, Council members tussled over the local policy governing street vendors, who Housh said were proliferating downtown in recent months, and the related issue of buskers, both being especially concerning due to COVID-19.

“They are not paying property tax, probably not paying income tax and crowding our downtown,” Housh said, adding that it may lead to unfair competition with brick-and-mortar businesses downtown.

Council members also discussed concerns about vendors blocking sidewalks. Curliss said the problems involving vendors were overstated, and she would not be in favor of limiting vendors in any way. Kreeger said it is important to “keep Yellow Springs weird” and allow cultural expression downtown.