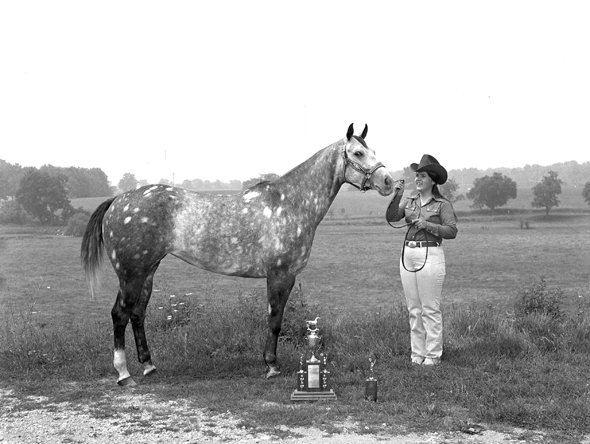 August 11, 1971: “SHOWMAN OF SHOWMEN among 4-H competitors at the Greene County Fair was Becky Collins, above, with her horse, Mary Grey. Two of her trophies are on the ground between her and Mary Grey.” (YS News archive photo)

ITT to buy YSI Incorporated. “The multinational company ITT Corporation and YSI announced this week that they had come to an agreement for ITT to purchase the Yellow Springs company.”
Fireworks assault. “Three Yellow Springs residents were arrested … for firing a bottle rocket at two Clark County Sheriff deputies on U.S. 68, slightly north of Young’s Jersey Dairy.”

Police Chief Grote to retire. “After 25 years of community policing in Yellow Springs, Police Chief John Grote has announced that he is retiring from the force.”

Erbaugh & Johnson Drugstore closed. Carl and Sue Johnson sold their drugstore to Revco. The Odd Fellows lodge owns the building and announced that they only wanted to lease to another pharmacy. Chamber of Commerce Director Betsy Newman and Village Manager David Heckler searched for a new drugstore, finally arranging for the pharmacy in Jamestown to open a second store.

Affordable housing. “‘Yellow Springs needs more low-cost houses,’ says builder Ray Olds, and he is building one — 22 feet square for $7,500, or about $15 a square foot.” [Full disclosure: Don Hollister was a junior contractor.]

Gunshot victim. “A 16-year-old Springfield youth with a gunshot wound in his left abdomen was found beside Xenia Avenue near the Pennsylvania Railroad tracks about 2:45 a.m. Monday.”

Segregation downtown. “Glen Café’s policy of refusing table service to [Black people] again brought criticism from distinguished visitors to the village who were victims of it Monday night.”

Traffic signals. “Council referred to the attention of the street committee the suggestion of a stop-light at Dayton and Corry Streets and caution lights on Dayton Street in the vicinity of the grade school [Union School]. Fast and heavy traffic at the time each day that workers are returning from Wright Field brought consideration of these measures.”