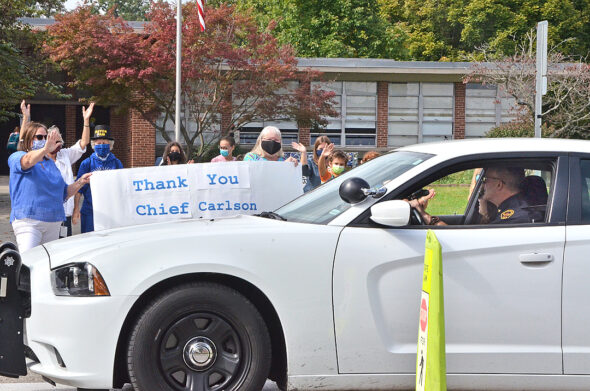 Mills Lawn students and staff and Mayor Pam Conine gave Police Chief Brian Carlson a round of applause — a Mills Lawn “clap out” of sorts — thanking him for his service. In a short ceremony Thursday, Oct. 14, students presented Carlson with a “thank you” plaque. (Photo by Jessica Thomas)

Carlson, who has been with the Yellow Springs Police Department for 12 years — five of those as chief — is leaving the force in November.

Conine led a group of fifth graders in a call and response cheer: “When I say ‘thank you,’ you say ‘chief.’”

The crowd of onlookers joined in the cheer, which added to the sounds of laughter from students on the nearby playground.

“You are a man with a big heart, which is what we have needed and wanted in a police chief, because you understand the values of the community,” MacQueen said. “I appreciate the work that you’ve done, and while I know we will miss you, I am hopeful that you will move on to something enjoyable.”

Winston also thanked Carlson for the care and support he provided to the elementary school.

“I thank Chief Carlson for adopting the Mills Lawn students and staff and allowing them to be part of his family and treating them as such,” she said.

Superintendent Holden remarked on the culture of service that Carlson created in the village during his tenure as chief.

“As superintendent of schools and a resident of Yellow Springs, I know you have really worked hard to change the perception of the police department to one of a servant organization while keeping the community safe,” Holden said. “We’ve noticed it, we’ve appreciated it and we will truly miss you.”

After Holden’s remarks, members of Student Council presented Carlson with a plaque to honor his years of service to the community.

“Thank you, Chief,” the students said.

Carlson gave a short speech, saying that the connection between the department and the schools has been “pivotal.” He said that he is proud of the work he has been able to do, calling it “a great honor.”

In the last part of his speech, Carlson credited his wife for his ability to cope with the demands of the job.

“It’s difficult for the family members that police officers return home to every night.” he said. “From the bottom of my heart, I thank you for all the support you’ve given me in my 12 years here.”