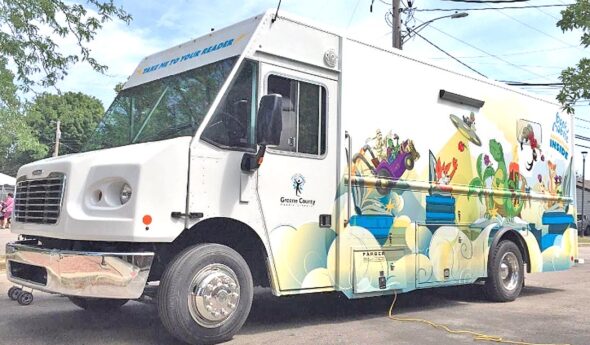 On Saturday, Aug. 14, booklovers from around the county gathered at the Fairborn Community Library to help dedicate the Greene County Public Library system’s latest asset: its brand new bookmobile. Over the course of the afternoon, more than 200 people came out to explore the bookmobile, which will bring books of all subjects to thousands of Greene County children each month.

The dedication event marked the culmination of a years-long effort. Replacing a beloved older model that served the community for two decades, the new bookmobile had been in operation for close to a month at the time of its dedication.

The dedication event served to honor the bookmobile with an official launch, including a ribbon cutting, food trucks and plenty of activities for children. Throughout the event, children made buttons, assembled 3-D paper models of the bookmobile and colored masks of the library’s mascot, Booker T. Fox.

“Our goal has always been spreading literacy with fun,” said Stacy Westfall, the bookmobile’s driver and manager.

Young readers should have no difficulty spotting the new bookmobile thanks to its visual design, which was crafted by art director and designer Liz Stolter Robertson and illustrator Wakka Ciccone, both of Yellow Springs. Strolling around the sizable bus, the library’s youngest patrons can view a series of surreal, dreamlike vignettes — here, a dragon-riding princess passes a football to a robotic receiver; there, a mummy and a zombie jump a hot rod off a stack of books.

According to Greene County Public Library Communications Coordinator Evan Scott, the bookmobile — and, for that matter, the entire library system — are all about imagination.

“The real epiphany was that there’s really no way to represent imagination — it’s too broad,” Scott said.

Instead of representing imagination, Scott said the creative team realized that the bookmobile should itself be imaginative. The mural on the vehicle’s exterior is a cross-section of the subjects in which library staff have observed that young readers most often express interest. The artwork is meant to inspire children to pick up a book through reminders of the kinds of adventures that hide in its pages.

Kim Bautz, the Library’s youth services coordinator and the supervisor of the bookmobile, said that the design company that supplied the bookmobile’s graphic wrap had never seen anything like it before.

Jans Pasma, the lead designer of Applied Graphics Ltd., said: “We’ve worked with hundreds of bookmobiles around the country, and this one will raise the bar for others.”

In addition to a creative new look, the bookmobile also features a number of accessibility and safety features, such as a wheelchair lift, wider steps and non-slip floors. Westfall said she hopes that these improvements will allow more children to experience the benefits of reading.

“We reach a lot of kids who either aren’t making it to the library on their own or can’t make it,” Westfall said. “Getting books into kids’ hands is the goal.”

Inside the bookmobile, the walls are lined with stories of all kinds — a true mobile library. The dashboard of the bookmobile is reminiscent of the cockpit of an airliner, complete with an intercom system.

In an average month, the library’s bookmobiles have historically served some 4,000 to 5,000 children. Beyond bringing books to schools, daycares and summer camps, Greene County Public Library Executive Director Karl Colón said the bookmobile represents the connection between the communities of Greene County.

“Libraries don’t belong to a place — they belong to a community,”he said. “And there’s few things that manifest that as clearly as the bookmobile. The bookmobile is an actual piece of physical library that will come find you wherever you are.”

“We want a bus that our community can see itself in,” he said. “With a new bus, we have the opportunity to try to figure out what story to tell.”

One Response to “New bookmobile revs into action”