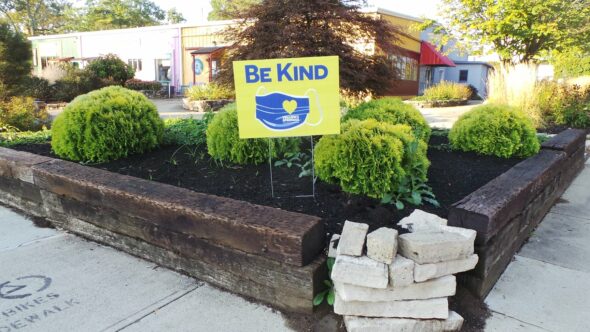 "Be Kind" signage issued out by the Village of Yellow Springs earlier this fall. (Photo by Phillip O'Rourke)

Editor’s Note: This article originally appeared in the Thursday, Oct. 21, issue of the Yellow Springs News. The printed article stated that the ordinance update had passed, which it did not due to the lack of a supermajority among those Council members voting on the legislation at the Oct. 18 regular meeting. A correction will be printed in the upcoming issue of the News. The article below has been updated for accuracy.

At its regular virtual meeting on Monday, Oct. 18, held via Zoom, Council attempted to pass an emergency ordinance to update the wording on the Village mask mandate. The vote was 3–1, with Council member Laura Curliss being the only “no” vote. Because Lisa Kreeger was not in attendance, and a supermajority was needed to pass the emergency measure, the ordinance did not pass, and it will not receive a second reading.

“This is a reflection of our conversation from the last meeting related to whether we should update our ordinance to reflect the recommendations from the CDC,”  Council President Brian Housh said.

During the public meeting, Curliss took issue with some of the changes, asking why the list of acceptable facial coverings was removed. Village Solicitor Breanne Parcels said that the original legislation included a list of examples of possible facial coverings due to the lack of available medical grade masks.

“The CDC right now is recommending people wear medical grade masks when they are in public,” Parcels said.

Curliss also asked about the burden placed upon people to prove medical exemptions if they are cited by the Yellow Springs Police Department.

“To me, this doesn’t strike the right balance between presumption of innocence and what we are asking people [to prove in court],” she said.

Parcels affirmed that, in the proposal,  the burden does shift to the person being charged, but said that police are not charging people unless they have been given several warnings.

“Our policy is that we are trying to reduce the number of stops for minor misdemeanor offenses,” she said. “The police aren’t going to be going out and ticketing people left and right.”

Parcels elaborated on the burden of proof, saying that the prosecution would still need to prove their case. A defendant, however, can provide documentation of an exemption, which would serve as affirmative defense.

Villager Jenny Johnson asked Council why they decided to change the exemption for children ages 2–10.

“Does that mean you are going to enforce kids wearing masks?” she asked.  “How are you going to give a kid a ticket? A lot of people are frustrated that the rules are getting stricter.”

Housh said that he would be happy to further discuss the proposed changes and expectations of the ordinance, stating that enforcement has been focused on education and not punishment.

“We have not had one citation for not wearing a mask in almost two years,” he added.

Council Vice President Marianne MacQueen said that the proposed changes to the ordinance would have made enforcement simpler, pointing out, “This is how we want things to be.”

In other Council business, Oct. 18:

• Council unanimously passed a resolution that would allow the Village manager to enter into a contract with Ranger Earthworks for sewer rerouting on Dayton Street. This will reroute the stormwater system on Dayton Street behind the businesses. According to the resolution, the total cost to the Village will not exceed $83,632. The total project could cost up to $522,697. The Village received a grant for $439,065 toward the total project cost.

• Village Manager Josué Salmerón reported that the Village broadband pilot project is testing its equipment in order to determine deployment protocols. The team submitted the Village’s census blocks to the National Telecommunications and Information Administration, or NITA, the entity to which the Village submitted its broadband grant proposal. According to Salmerón, “we consider this a sign that our application is being considered.” Next steps include adding equipment to the targeted households and areas, doing a survey of villagers to determine interest in the new utility and determining a fee schedule. Asked about satisfaction levels of current Village broadband users, Salmerón said that it would be difficult to survey current users because there is not a way to track who is using the service. He did say that there are 658 average daily users, up from 500 last year.

• Salmerón is working with Ellis Jacobs to put together a five-person committee to look at body-worn camera best practices and policies, including guidance from the ACLU. After researching the practices of other communities, the committee will draft policies for Council to adopt for the Yellow Springs Police Department. Those policies will focus on body camera usage that will not infringe on the civil liberties of citizens. Salmerón hopes to have an update within a month.

• Salmerón also updated Council on staffing needs for the YSPD. The police chief search meetings are continuing, and the selection committee is reviewing candidates, having narrowed the pool down to 10 of the 32 initial applicants. He said that the committee is focused on finding a candidate that has “the skills and abilities to work beyond the skills given in traditional law enforcement training programs.” The search committee is working on planning and scheduling a community forum. In other police department staff updates, appointments have been made for the property and evidence manager’s position and a full-time dispatcher position.

• Council also discussed plans for Beggars Night trick or treat, which will be held on Sunday, Oct. 31, 6–8 p.m. The Village will sponsor four bonfires: one at Gaunt Park, and three at locations that are to be determined. The Gaunt Park bonfire had been slated to allow for villagers to gather at a venue that accommodates physically distanced crowds.