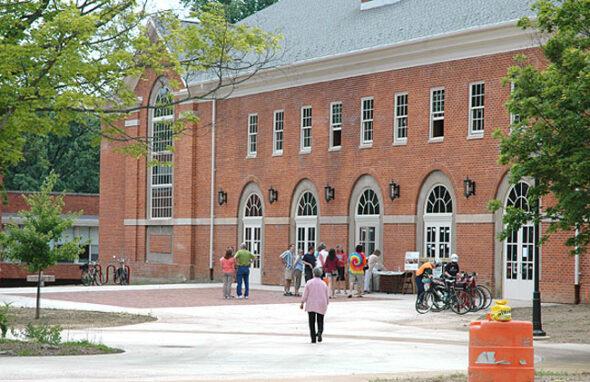 The Antioch College Wellness Center has partially reopened for Antioch students, and hopes to fully reopen to students and the general public in the coming months. The center closed in March 2020 due to COVID-19. Here, visitors toured the center a few months before it opened in September 2014. (Photo by Megan Bachman)

In a letter to the editor published in the News last week, which also went out by email to Wellness Center members, Jane Fernandes, President of Antioch College, announced that the college will no longer be working with the Yellow Springs Development Corporation, or YSDC, to reopen the Wellness Center. According to the letter, the college has partially reopened the center for Antioch students, and hopes to fully reopen to students and “begin to plan for the human, material and financial resources needed to reopen for the greater community” in the coming months.

The center originally closed in March of 2020 in compliance with an order from the State of Ohio in hopes of mitigating the transmission of COVID-19.

As reported in the Oct. 13 edition of the News, the center opened to students on Friday, Oct. 8. Hours are limited to Monday, Wednesday and Thursday from 6 to 10 p.m., and students are able to utilize the workout room, basketball courts and select studio spaces.

In a phone interview following the publication of Fernandes’ letter, Lisa Abel, president of the YSDC, said that the group had formed two subcommittees to understand what needed to be done to reopen the center.

Abel said that the first of the two subcommittees found that the YSDC would need around $200,000 in funds to reopen the center.

“Some of that would have been paying personnel before we had incoming monies for members,” Abel said. “The rest would be used for maintenance and testing in order to reopen the pool and spa.”

In order to acquire those funds, the YSDC had been in conversations with the Yellow Springs Community Foundation, Abel said. They were pursuing a line of credit through the foundation that would allow the YSDC to withdraw funds as needed.

The second committee was tasked with writing a job description for the center’s director, posting the position and fielding applicants. That committee’s work was put on hold when representatives from Antioch College pressed pause on negotiations between the college and YSDC in September.

“I feel like we did our best to move the process forward, and I hope the work we did has set Antioch up to finish what needs to be done to get the [Wellness Center] open,” she said.

In a follow-up phone interview with Fernandes and Bob McKee, Antioch’s vice president of finance, Fernandes said the decision to move forward with reopening the Wellness Center followed an examination of the partnership between the college and YSDC.

According to McKee, the college has looked at the numbers provided by YSDC, but he thinks it will be less expensive to open if the college is operating the facility.

“We do not have a specific number. Many of the costs will be internal, so they won’t stand the same way they would with YSDC.

McKee also said that the college will be coordinating with the Village of Yellow Springs to fill the pool in order to offer additional services to students.

“We expect to open it in the next few weeks,” he said. “We are on schedule for adding as many things as we can and will be communicating on a regular basis.”

As far as reopening to the public, McKee and Fernandes hope to welcome the public back into the Wellness Center “within months.”

“At its peak we had about 1,500 memberships,” McKee said. “Our goal is to return the Wellness Center to benefit students and the greater Yellow Springs community.”

McKee added that the college will honor all memberships that were paid prior to the center’s closing in March of 2020. He said that the committee working on reopening the center is focusing on staffing through campus resources and former employees, including Trevor Lowe, who has temporarily operated the facility since it opened its doors to students Oct. 8.

“There are a number of students who would like to experience [working in the Wellness Center] as a co-op opportunity,” he said. “Trevor will absolutely have a part, and we are in discussions about what that looks like.”

The results of those conversations were unavailable prior to press time.

McKee said that, after the successful reopening of the Wellness Center, the college will look to open other facilities, such as the Foundry Theater, to the public.

“We hope that all of them will return to normal and that we can start using facilities and celebrating our achievements,” he said.

One Response to “Antioch and YSDC part ways over Wellness Center”