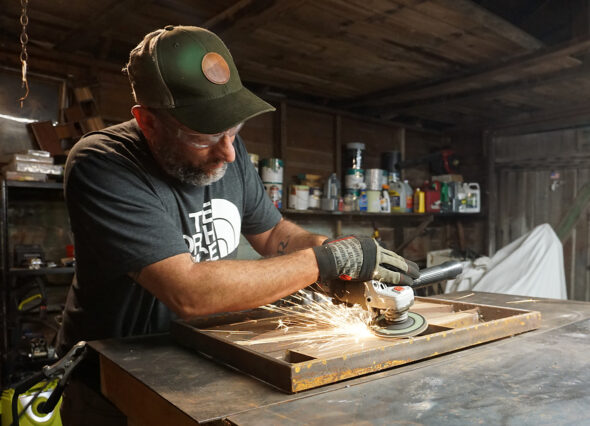 Artist Profile | ‘Mapping the void’ with steel and wood

A cluttered workshop may seem like the last place to make sense of a world beset with so much messiness.

But somewhere among the heaps of rusty scrap metal and mounds of sawdust in his small garage, local artist and fourth-generation welder Seth Ratliff has honed a craft that’s allowed him to find order in all the chaos.

Over the last several years, Ratliff has carved out a style and a process of sculpting that is entirely his own. Fusing together salvaged wood and recycled steel from area sheds and discard bins, and aligning these pieces to create intricate patterns, Ratliff creates abstract sculptures that yield new and often surprising geometries.

In a recent interview, Ratliff described his approach to making his abstract art as an exercise in juxtaposing the concrete with the conceptual.

“I’ve always tended toward the abstract,” Ratliff said. “I think a lot about space — literally and figuratively. That’s where all my sculptures start out.”

His sculptures synthesize contrasting elements such as rigidity and fluidity, motion and stillness, masculinity and femininity, emptiness and fullness. Ratliff described his approach to sculpting abstract art as an exercise in holding these things in tension.

Although he’s been a lifelong welder and a maker in many mediums, Ratliff began fusing wood and steel together in 2017. Inspired by the sweeping cartographic patterns and geometry of a Cincinnati map, he spent several years ruminating on how he could integrate a similar aesthetic into his work. One day, when he was attempting to clean his garage, a jumbled pile of old wood and steel on the ground caught his eye.

“I scooped them all up, put them on my bench and began putting the pieces together like a puzzle,” Ratlif said.

He had struck gold.

Since that “eureka moment,” Ratliff’s work has gained notoriety both in and outside of Yellow Springs. In the autumn of 2020, Ratliff put a dozen of his sculptures on display at the Yellow Springs Brewery — all of which sold. Over the subsequent year, he has continued sculpting and making commissioned pieces under a new moniker: Hammer & Iron Studio. His social media pages have garnered a following of nearly 1,000 fans.

Despite his growing reputation in the local art scene, Ratliff said his sculpting continues to be a more personal labor of introspection and psychological exploration.

“It’s almost a Zen process,” he said. “It taps into that part of me where the ego and the id meet.”

The making of a maker

A decades-long resident of Yellow Springs and a native of Waynesville, Ratliff has spent his life whetting his creativity. Since his youth, he’s experimented in all kinds of media: drawing, illustration, painting, photography, music and more. Owing to his family’s multi-generational trade of welding, Ratliff fell into an early love affair with the more material arts. 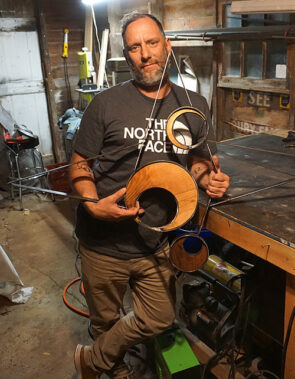 “Some of my earliest welded projects were metal roses I’d make for girlfriends,” Ratliff said with a laugh. “You know, cheesy Hallmark things.”

Ratliff said that welding has been one of the consistent things in his life that has simply made sense to him.

After he graduated from the Greene County Career Center in the late ’90s, Ratliff soon found himself drawn to Yellow Springs, which he described as a hub of creativity. While he held down a job working in the kitchen of Ye Olde Trail Tavern at night, and welded during the day, he began meeting and collaborating with student artists and creatives attending Antioch College.

“I realized right then and there that this is where I wanted to be,” he said.

Now settled in Yellow Springs with his son, Victor, Ratliff commutes to and from his job in Cincinnati as a mechanical engineer designing air compressors for the Japanese company Anest Iwata.

“My work is mostly desk-oriented, so it’s nice to come home and get into my own shop at night,” Ratliff said.

“Making sculptures is my therapy, man,” Ratliff explained. “If I’m having a rough day at work or going through some anxiety, it can be such a relaxing release to go out to my shop, put on some music, crack a beer or two, sketch out some ideas and then make them a reality.”

Ratliff said that abstract sculpture allows him to materialize the existential troubles he sees in the modern era.

“This kind of work is important to me,” Ratliff said. “In today’s world, making something real and tangible is one of the few things that just makes sense. When I turn on my welder or cut into a piece of pine, I almost forget all that crazy stuff that’s going on out there.”

Even amid the ongoing COVID-19 pandemic, Ratliff’s sculpting has kept him “grounded and sane.”

“Through the pandemic, it was a challenge,” he said. “We’re all mentally and spiritually exhausted. Making that stuff in my shop, putting the pieces together has helped me hold the line and keep going.”

“Not to mention, I had a lot more time on my hands to work on stuff this past year,” he added.

Ratliff said he hopes people, when viewing his work, experience the same kind of serenity and peace he experiences when making it. He said he wants people to think differently about geometry, form and function.

He asks: “If you had to map a void, if you had an empty space and you were tasked with mapping it out, what would that look like?”

And another request Ratliff asks of local art patrons: contact him with any leads on scrap wood — specifically pine, walnut or oak.

To see more of Ratliff’s sculptures, visit the Hammer & Iron Studio Instagram page at @hammer_iron_studio or on Etsy at http://www.esty.com/shop/hammerandironstudio. To inquire about commissions, sculptures for sale or to donate any scrap wood, contact him directly at SethRatliff@gmail.com.