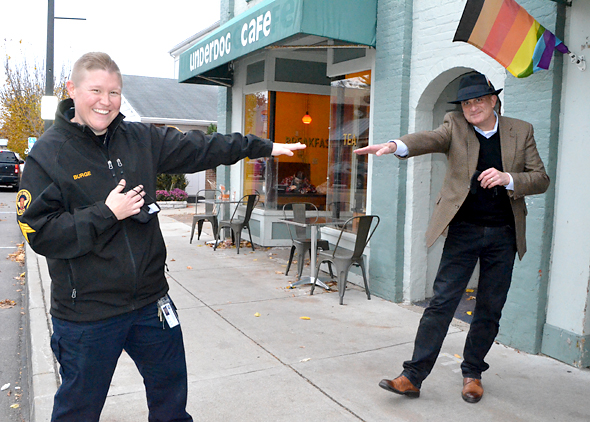 Burge has been with YSPD since 2019, when she joined as a foot patrol officer. She was promoted to sergeant in August after the departure of Naomi Watson. Hailing from Fairborn, Burge will be YSPD’s first female and LGBTQ+ chief. Prior to her service with YSPD, Burge worked in the private sector in asset protection for 10 years.

In a press release issued Friday afternoon, Salmerón said Burge has “demonstrated an exemplary work ethic, a commitment to community engagement, and responsive and engaged leadership, as both patrol officer and sergeant.”

When reached by phone, Salmerón said Burge will be sworn in as interim chief at Village Council’s regular meeting on Monday, Nov. 15. He said naming an acting chief for the weekend will ensure continuity in the level of service YSPD provides to villagers. However, Salmerón said the Village is continuing its search for a permanent replacement as full-time chief.

“With an acting chief, there will be less pressure on the selection committee to make a quick decision,” Salmerón said. “I’m looking for someone who is mindful of the culture of Yellow Springs and can engage with the different groups within the community.”

Salmerón said a knowledge of the community and a willingness to create a police department that aligns with Village values are just two qualities that the search committee is looking for in Carlson’s replacement.

Carlson was with YSPD for 12 years, with five of those years serving as chief. Under his tenure the police department underwent many changes, including the addition of a full-time social worker, increased bike and foot patrols and implicit bias training for officers.

Reflecting on the process of selecting a new, permanent chief, Salmerón said that he wants to make sure the candidates are ready to fill Carlson’s shoes.

“I don’t want to repeat the mistakes of the past, when the interviewee looks good on paper but is not a good fit here,” he said. “I want to avoid that because we have done so much work to change the culture of our police department.”

“If it means taking our time, we’ll do that,” Salmerón said.