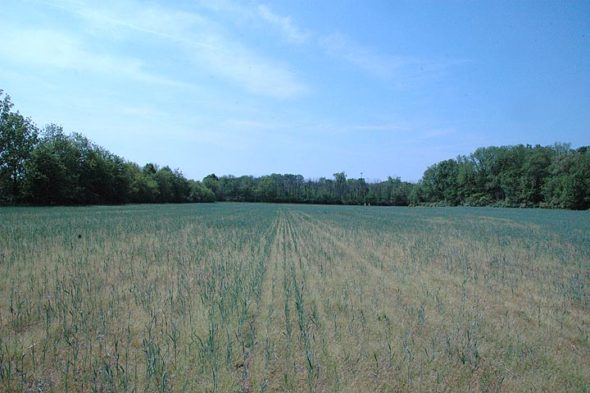 Sutton Farm as it appeared in spring 2018. (News archive photo)

At its regular meeting on Nov. 1, held virtually via Zoom, Village Council members heard a report from Village Manager Josué Salmerón that detailed the standing of the Village’s energy portfolio and ways to continue using alternative energy in order to provide electricity to the village.

Currently, the Village has contracts with two alternative energy providers, EDI Landfill and Blue Creek Wind Farm, which make up 18% of the Village’s energy portfolio. According to Salmerón, the two contracts provide up to one megawatt of electricity to the village, but are set to expire. He then explained that the energy system can handle up to 2.5 megawatts, but that new developments may create a larger need for electricity.

“With the projected growth that we are seeing, that being Cresco, the Oberer development, and other development projects in town, we anticipate having a load growth of up to 5 megawatts in our load demand,” he explained.

Salmerón told Council that the Village needs to address the current power demands and plan for anticipated demands. In an executive session where vendors shared “protected” intellectual properties, he presented several options to Council. Two of the proposals came from AMP, a Canadian-based solar company. Its project would not come online until after the current contracts expire, but Salmerón said that he and Public Works Director Johnnie Burns would like to pursue the project in anticipation of future needs.

“We want to sign on to this project because the generation won’t come online until 2024, which will be in line with when we are expected to provide a greater [amount of] power,” Salmerón said. “Signing on with AMP will be a good opportunity to provide for that need.”

To fulfill the current need, Salmerón said there are two options that will provide solar generation at the local level. Both options include contracting to build solar arrays on Village-owned property.

“I’ve gotten feedback from community members and stakeholders that there’s an interest to see more local solar production,” he said.

To do that, Village staff has explored the possibility of creating a solar canopy, but Salmerón said the projects were too expensive. He explained that he and Burns looked at all of the Village-owned properties to determine the best place for a solar project. They found that the Village could produce 2.5 megawatts of solar-generated energy by building a solar array at the Sutton Farm and placing solar panels on buildings such as the Bryan Community Center and the Train Station.

However, in order to build a solar array at Sutton Farm, the Village would have to submit a request to the Tecumseh Land Trust, which holds a conservation easement on the land. Salmerón said that “we could use a solar development project to advance our goals around conservation,” calling the proposal an “agrivoltaics” project, a project that generates electricity and provides space for pollinators.

In response to the proposal, Council member Laura Curliss said she is hesitant about placing a solar array at Sutton Farm.

“[When] siting solar power, the key thing is to site it on land that is not greenfield,” she said. “My strong preference is to locate solar either on buildings or on industrial legacy land.”

She said that the project would disrupt soils and other natural structures and that the Tecumseh Land Trust may deny the Village’s request because they may consider the project a commercial venture.

“I would be happy to see it on the solar farm,” Council Vice President Marianne MacQueen said in support of the idea. She followed by saying that she thought the conservation easement would need to be changed in order to build the array because the easement says that no structures can be built on the land.

Village Solicitor Breanne Parcels said that when the easement was written, it was not as “forward-looking” as it could have been.

“When this easement was done back in the ’90s, solar versus what could be done with the agricultural component wasn’t contemplated,” she said. “Now we have projects that can integrate agriculture.”

Parcels added that ultimately, the Village will ask what parameters they will need to follow in order to move forward with the project, and the Tecumseh Land Trust board will make a decision.

In other Village Council business, Nov. 1:

• Council passed a resolution to recognize the retirement of Chief Brian Carlson and to officially retire his service weapon. Carlson’s last day is Nov. 12. Council member Kevin Stokes thanked Carlson for his years of service, saying, “Over the past few years, we have had this pantheon of good police chiefs, Jim McKee and whatnot, and certainly Carlson is a part of that … Mount Rushmore of police chiefs.”

• Council passed a resolution approving the purchase of a dump truck, which will replace a truck from 2003 that has rusted through to the degree that it cannot be repaired. According to Salmerón, the purchase will be funded through monies saved by doing cost-saving projects and other in-house work. “We think it’s necessary to do this right away,” he said. The dump truck can be purchased outright with allocated funds from the 2021 budget.

• In an item added to the agenda, MacQueen read a letter from over 20 environmental and water conservation groups discouraging Ohio Senate leadership from passing House Bill 175, which would remove mitigation requirements and protections for ephemeral streams, or streams that only hold water after rainfall. MacQueen asked to bring a resolution opposing HB 175 to Council’s Nov. 15 meeting. After a suggestion from Curliss, Council decided to write a letter in opposition to Ohio state House Bill 175.

• Council heard two citizens’ concerns regarding zoning laws and the Oberer development. Alex Melamed said that the best way to address affordability in the village is to loosen zoning requirements. Council President Brian Housh acknowledged that zoning laws need to be reviewed and that Council will take up zoning in 2022. A second comment from Christopher and Linda Cox asked about water management in the new Oberer development, saying that neighbors are concerned about the stormwater runoff. Zoning Administrator Denise Swinger tried to assuage concerns by alluding to plans for retention ponds and a wetland that will be shared in detail at the next Planning Commission meeting.