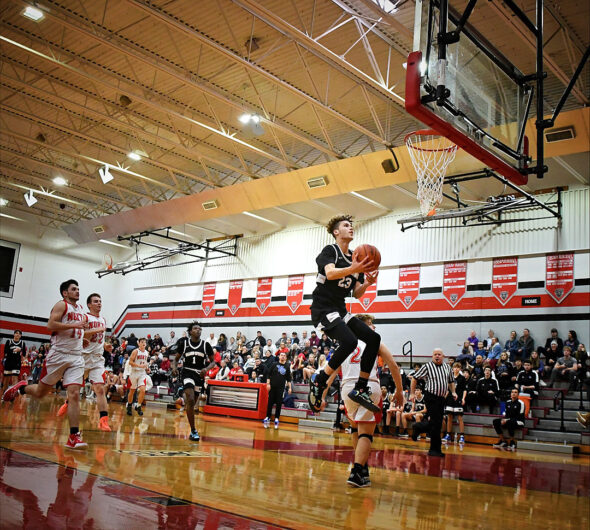 On Tuesday, Dec. 7, YSHS faced off against Tri-County North, ultimately winning 52-33. Here, YSHS senior DeAndre Cowen heads to the hoop as if floating in air. (Photo by Michael Knemeyer)

Bulldogs on win streak
The Yellow Springs High School varsity boys basketball team is burning up the court, winning their last six outings. The team’s current record is 6–1 for the season and 3–0 in conference play.

Three players accumulated all the points in Saturday’s away game against Twin Valley South: Smith scored 32 points, with seven assists and 10 rebounds; A. Longshaw earned 17 points and five rebounds; and Totty netted nine points, with one assist and 14 rebounds.

Statistics for the win against Miami Valley School were not available at press time.

The girls’ current record 6–2 for the season and 2–0 in conference play.

Boys log winning match
In a match Monday, Dec. 13, against Legacy Christian, the Bulldogs finished with a win, toppling 1,869 pins to Legacy’s 1,045.

The team’s current record, according to the MBC website, is 2–1 for the season and in conference play.

As of press time, the girls squad didn’t have a match scheduled in December.